After slaughtering and looting the skinheads, the party continued deeper into the caves, finding the bottom of the shaft the harpies and gargoyles used (along with a fair bit of harpy droppings. No one wanted to determine if the various pebbles were gargoyle droppings.

The sounds of singing and drumming to the south captured their attention, and A-A-Ron scouted ahead, seeing a large cavern full of more of the skinhead tribe. Backing away, they formulated a plan. Getting everyone with crossbows in tight formation, they crept forward. One surprise volly of bolts later, many of the skinheads were bleeding, but none were down. Karl, Orpheus, Lex, and A-A-Ron charged in, backed up by the men at arms.


In the melee, Alias was the first casualty, as a skinhead sheared off the top of his skull. He was quickly followed by Modar, Kartas, Eddard. Orpheus veered in from the side, cutting a bloody swath through the flank of the skinheads, while Karl, Lex, and A-A-Ron charged in the middle. A-A-Ron, ducking under skinhead blades found himself toe to toe with the chief. He sliced his magic blade against his opponent, but the chief ignored the bleeding wound, stabbing A-A-Ron through the belly, then hammering the pommel of his weapon on the thief’s skull. A-A-Ron dropped, and no one was near enough… Orpheus cut though the remaining skinhead between him and the chief, and then laid the chief out. 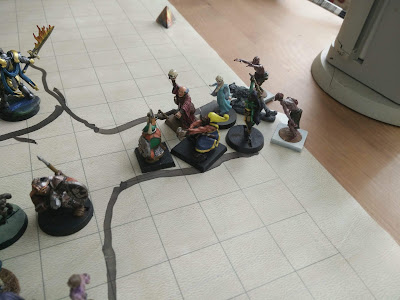 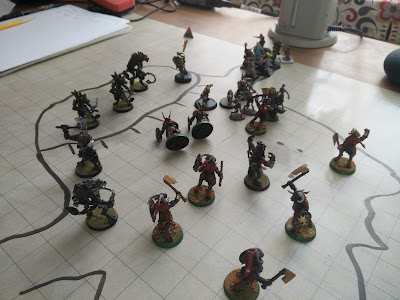 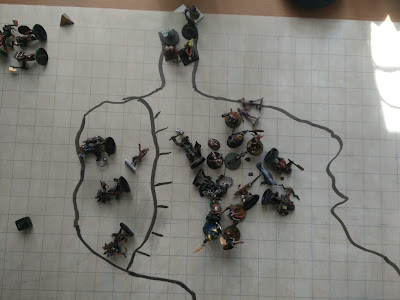 Darryl and Koltic rushed in to triage the hirelings, but even their magic wasn’t enough to save them. A-A-Ron was patched up, their magic able to restore his life’s energy and even break the coma he was slipping into, but full recovery would take time.

Looting the chamber quickly, they collected a large collection of piercings, beaten copper jewelry, and a couple of fancy gem studded piercings. Gathering the bodies, and propping A-A-Ron up, they head back up.

Near the entrance to the dungeon, the Chosen of Zunbar stop the party, and suggest that as “Adjacent to the Chosen of Zunbar” they should share the wealth. Eiric, under the stain of having lost so many, and nearly losing A-A-Ron is about ready to drop a fireball on them, but Karl and Koltic calm her down, and share some of the copper jewelry from the skinheads, then head back to town.

A-A-Ron spends the better part of a week recovering, being tended to by Darryl. Eiric goes looking for more meatshields, and hires Narus and Verman as men at arms, and Koltic hires Gilwick the torchbearer.