Stonehell: Lost Level: All About the Arachnids

Biffin takes the magic book to study for the next 6 weeks, and so is unavailable. Morgana, after successfully researching a new spell, wants to test it out on the (phase?) spiders the ogre actors told them about. Gathering up Karl and Darryl and hiring some meatshields they head to the lost level to fill in more of the map.

They kill a random cobra, find a room with an old dusty fancy suit of armor. They disassemble the armor and pack it up.

Onto the spiders, once the first one was in sight, and Morgana confirmed that it was indeed a phase spider, she cast her Dimensional Anchor spell, locking it in this phase. Confirmation of the success of the spell came as the spider began to scream and yell at the party. Morgana was shocked to hear them speak and threaten the party for this unprovoked act of aggression. Morgana reassures the spiders that the effect will wear off. She leaves 10gp for them. Karl leaves some candy.

Passing back by the ogres, they get roped into chatting with them about the play. Karl asks them for their autographs. They prick their fingers to sign a page from the script.

The next set of rooms they explore were inhabited by more arachnids, this time by 3 (unintelligent) giant scorpions. In the battle Darryl gets poisoned, the 3 hirelings all die, and Morgana gets badly clawed. Darryl is saved with some antivenom, but the hirelings are beyond saving. Morgana collects the venom sacks from the tails. The party returns to town.

After spending some time in the rooms beyond the floating door, they descend back into the lost level, and continue to explore the blank spots on the map. Along the way they stumble into a barrel trap. Lada, Darryl, and Biffin all fail to avoid the rolling barrels, and get smacked pretty hard. Borumar gets past the trigger mechanism, and disables it.

Passing through the giant snake statue room, they come to a locked door. Borumar hears goblin being spoken on the other side. The party preps to open the door, but then 4 hobgoblins spot them coming up the corridor from behind the paty. Karl rushes toward them, trips and falls.Morgana casts sleep, dropping the 4 in the corridor. Within the room more hobgoblins prep for battle, but are quickly killed. The 4 sleeping hobgoblins are taken prisoner, stripped of anything valuable, and tied up. Under questioning, they reveal that they’re part of a scouting unit sent to discover what happened to the previous occupational army that had been sent into Stonehell.

The surviving hobgoblins are locked in a small chamber. If they can escape, good for them, and if not… it isn’t the party’s problem.

They swing through Kobold Korners, Karl get some candy. On the way back to town a group of angry and soggy berzerkers tries to get at the party. Gimble webs them, and they’re left to get themselves free.

"Look, I don't know what to make of it either." Nimble whined. "I'm not sure how to get past it quietly."

"If it's noise we're worried about, I can make it silent." Feris offered.

Feris wove the spell, and then nodded. "It'll be silent all around the doorway."

Nimble crept up to the double thickness heavy beaded curtain and began to carefully push his dagger through it to peer through to the other side, when the whole things just collapsed to the ground... Rathgar, Allianora, and Feris watched as the beads silently hit the floor, bounced, and rolled while Nimble froze. Then he began to flail as the beads became a swarm of angry beetles.

Beetle Curtain
Range: 10'
Duration: Permanent until triggered
Effect: creates an enchanted beaded curtain (or rug) that will turn into an insect swarm when triggered

Returning to the Lost Level, the party opts to fill in some blank spaces on the map, and so continue into the halls past the still destroyed wizards’ lair. There they come across a chamber without a door… but a door within, floating 15’ off the ground. Also a nest of stirges, and the bodies that had fed them. The party killed the stitges, and avoid the rot grubs infesting the bodies.

Karl levitates up to the door, opening it, and discovering rooms beyond. The party explores the nearly empty rooms.  A few have windows that look out on a barren rocky landscape devoid of any life that they can see. One discovery is a letter… that they can’t read. Taking advantage of the safe space, they rest for a day… night? The scene through the windows doesn’t change much. Stars over a rocky landscape.

Heading back into the corridors, they find a mushroom farm in raised beds. Then a locked door beyond which is an angry goblin who shares the small room with bags, boxes, barrels, cups, and bowls full of beans painted black and white, and a chalk board with indecipherable scribbles. They asked him what he was doing, and he said counting. Counting what? He asked some questions, before answering. They only understood about half the words he used. He then kicked them out. Karl stole some beans.

Further along the hall they heard some talking, arguing. Looking around a corner, they see some oddly dressed ogres arguing about something written in a book. It was the script of a play, and they were in costume. And they wanted to run the dress rehearsal for the party. They scrounged some chairs, a couch with springs sticking out of it, and a couple of crates with pillows on them, and then the show was on! It wasn’t good, but it also wasn’t as bad as they were expecting. The 5 hour run time was a little much.  They give some praise, and promise to return when they’re ready to do more than a dress rehearsal.

After leaving the ogres, they poke through several empty-ish rooms, finding a hidden stash of 200gp and a fancy dagger. They opt to return to the floating door to get some more rest.

Borumar introduced Nick to some of his friends from the Stonehell side of the world, and they came along to go explore the worm tunnel and adjoining dungeon. It stank. Worse than before. But when they return to the rooms they’d found last time, they found the 20K copper coins still there, which suggested that no one else had been down to the dungeon.

Trying the door they skipped last time brought them to an octagonal room with murals painted on it. 5 men in white robes, one with a blackened left hand. Examining it closer, it looked like the black paint was added later. The open doorway to the west revealed a long dark silent corridor. The door to the east led to an empty room with 2 other doors. Checking the door to the south, revealed a massive rat, the largest that Nick had ever seen. It vomited on Jameth and Nick. Borumar killed it with a solid blow after a short fight.

Nick and Jameth begin to feel pretty ill, but press on.

The other door opens into a bedroom. The nightstand has charcoal drawings of 3 different women. They don’t look related. Jameth vomits. Nick, feverish, finds a secret door leading into a walk in closet. They use a pair of the Cure Disease scrolls, and instantly feel better. Exploring the closet they find a table with a jar containing 5 gold rings, each inscribed with “to my one and only”, a leather bag with gold coins, a silver headed mace (magic?), an obsidian earring with “Rappan Athuk” neatly carved around the obsidian sphere (is there a gift shop down here???), and 3 red scrolls with a note basically telling the recipient of the scrolls, Jossel, to be less of a player, or at least use protection. Borumar finds 3 silver rings under the table.

Heading back toward the octagonal room, the sound of leathery wings and demonic cackling echoes down the hall. A pair of the chocolate demon babies! Combat is pretty quick, and the party manages to avoid too much damage. Borumar, while considering taking another horn, sees a weird tooth in the mouth of one, and pries it out. As soon as he does, the demon baby dissolves. Checking the other, he finds the same thing. The weird teeth were pearls!

Having checked all the available closed doors the party heads down the dark hall. After a good distance they find a pair of doors, and the hallway turns to the south. Checking the hallway, they don’t see anything. Checking the door to the north, they find an ooze that gets Borumar a little, but is killed quickly.

Nick makes a note to make sure everyone gets some ranged weapons when back in town.

Beyond the ooze is another hallway with a door at the end heading north.

Checking the other door before pressing on) they find a store room, and a large ambush spider. Borumar gets bitten, but doesn’t seem poisoned. Nick spears the spider, killing it. Searching the room they discover a large stash of copper coins, some silver coins, and a fancy silver plate. Using Borumar’s magical elephant, they carry out all the copper and get back to the village, only encountering a swarm of harmless but creepy  roaches that swarms over and past the party in the worm tunnel.

Back in town, Nick trades 1 red scroll to Olmam Dark, the necromancer, for 6 lesser healing potions, and 1 free cure disease spell (just have to make it back to the necromancer to collect on the spell, as well as a good discount if the scroll results in something useful.

Checking around with the charcoal drawings, Nick finds one older lady named Yolanda  who thinks she’s one of them, and she recognizes the name Jossel, her first husband. She lost him 60+ years back. He’d been a member of an order of priests devoted to healing, and apparently trying to heal the whole world of disease (what did they do wrong!?!)

What a month… Yes the pandemic continues, but it didn’t stop me from being there when 2 of my best friends got married! On top of that, there was my son’s first birthday, and Halloween. Overall a great, if somewhat exhausting month. 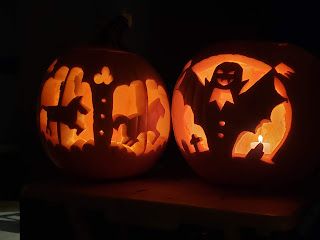 Gaming
Due to scheduling issues, and what the players want to do in Stonehell, and how they want to go about it, we’re waiting to run that again till everyone can play… which has meant that I’ve gotten to keep playing Nick in Rappan Athuk.


Miniatures
It ended up being a not super productive month. I worked on several minis, but only feel like I finished (not including basing) a couple of them. And given how busy this month is going to be, I’m not holding high hopes for getting much more accomplished. 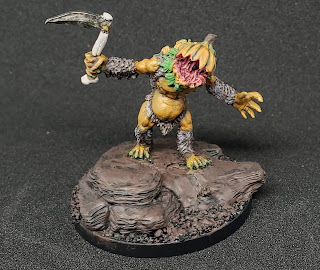 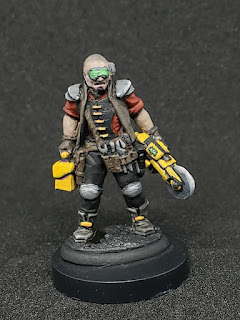 
Goals - keeping it really simple this month.
Paint some minis
Play some D&D