The scarecrow is a familiar sight in any farming community.  So common, in fact, that locals don't even notice them, don't notice that they don't always seem to be in the same position, don't notice the stains of blood that sometimes appear on their clothes and tools.  Sometimes they don't even notice that the crows hanging about seem well fed in spite of the fact that the crops haven't been touched.

It crawls out of the shadows...

Tim from Gothridge Manor asked in my last post if I plan on posting my stocked dungeon.

Yes, yes I do.  Just as soon as I'm happy with it.  I have been working on it, sort of.  Actually I've been working on stocking random dungeons the last couple of days, just to get the knack of it again.  I feel so rusty and out of practice, and as usual life keeps trying to distract me.  I've also been reading or rereading every dungeon and megadungeon boxed set, adventure, book, article I can get my hands on. This goes back to my over prepping for everything.

Last night I decided that my dungeon, my world will operate under the idea that bad things really do crawl out of the darkness.  Vermin do spontaneously generate in the back of store rooms.  Undead arise naturally from abandoned graveyards and tombs.  Goblins and kobolds spring from the dark woods and grottoes fully formed, fully evil, and ready to raid and destroy.  Trolls form under bridges as a matter of course.  Dragons bubble to the surface from volcanoes and swamps to take wing and terrorize for miles around.  Abandoned cities, villages, temples and dungeons (especially dungeons!) twist and the darkness consumes them, and what was once a logical structure more and more becomes a realm of nightmares.  This will free me from having to make my megadungeon "make sense" as it currently exists, and is heavily lifted from the idea of the megadungeon as the mythic underworld as explained by Philotomy in his OD&D Musings.   It also makes for a strong campaign that pits civilization against chaos.

Thoughts on stocking my megadungeon

Over the weekend, I put my pencil to paper in an attempt to stock my dungeon and I didn't get very far.  The problem was that I knew what this particular level had been used for hundreds of years ago, but I wasn't sure what had happened to it more recently. 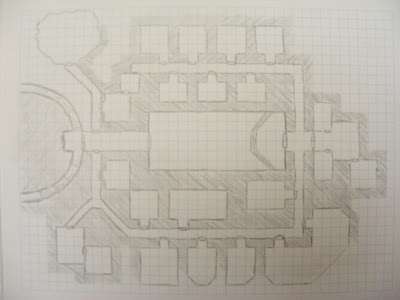 I didn't want this level to be inhabited by a particular group, i.e. this isn't an orc hold, or a bandit lair.  I want it to be a bit of a mix, probably with a fair population of vermin and a few undead.  I'm going to have some orcs in the vault level, having just raided part of it, and they'll be coming out of the vault when the PC's arrive.

What about the main hall?  A big nasty thing?  Or empty?  I'm leaning toward empty, or at least devoid of monstrous threats, especially as the vault sub-level will have some tough encounters. Well, as I'm going for a semi-oldschool feel, lets roll for it.  Using the tricks charts from OSRIC (pg 155-156) I came up with an antimagic alter.  That kind of makes sense actually.  You wouldn't want magic used during diplomatic negotiations!  Lets go with that.

A murder of crows

Yesterday when I got home from work and let the dogs out in the back yard I looked up and saw crows flying from west to east.  Lots of crows.  For over 20 minutes.  There were hundreds of them that I could see, maybe a couple of thousand over the entire period.  I took a video of some of it - Crows over Baltimore.  To be honest, it was kinda creepy.  Yet at the same time I thought what a great mood setter for a game.  How would players react to seeing a couple of thousand crows flying in one direction overhead?  It isn't really anything they can directly interact with, but they're left with a choice - go where the crows are going, go where they came from, or ignore it.

I've been thinking more about the structure of my megadungeon, and the implications that a central shaft driving down practically to the lowest levels of the dungeon.  Players will be able to, from the start, descend the entire way down to the very depths of my as yet unnamed megadungeon.  It'll be a very exposed descent, but they could theoretically do it.  On the other hand, it'll be hard for a player to pass by all of the portals and doorways in between the surface and the lower levels!

Monsters of the megadungeon.  There will be a fair amount of vermin in the upper levels - lots of unintelligent critters.  Kobolds will be pervasive throughout the upper levels, though never in great numbers.  They've discovered that small tribes survive much better than large ones.  They attract much less attention!  Encounters with them will probably be with mining/scouting/salvage groups.  They'll often be attracted to the sound of combat, yet not reveal themselves until after the fighting is over, and they can pick through whats left, and if the victors appear suitably weakened, then they'll attack.

One thing I don't think I've ever done in all my years of gaming is to create random monster charts.  I've used them, but I've never created my own.  Now I'm going to have to create some for the unique ecology of my megadungeon!  The way I figure it, the shaft is going to require it's own wandering monster table, possibly 2 of them, one for the upper half, one for a lower half. The first couple of levels from the surface can mostly all share a chart (with a few exceptions I expect).

I continued to work on my dungeon this weekend.  First up is the vault sublevel below the dwarven hall. 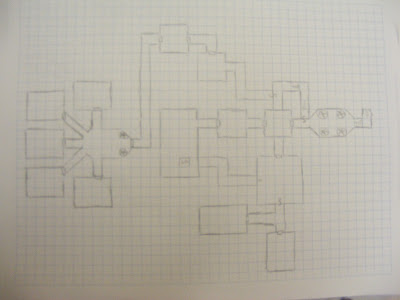 Next up I've got a section of mine.  I think this is from the abandoned hobgoblin area.  You can see the finished room where the miners stay after their shift.  Being hobgoblins I figure they probably used slaves to do the worst jobs.  In the "How to Host a Dungeon" game that I played, the hobgoblins encountered the cave of fate, ending their existence.  I haven't figured out what exactly that was yet, but there are a number of possibilities ranging from the mundane to the exotic.  Luckily I don't have to settle on the answer now. 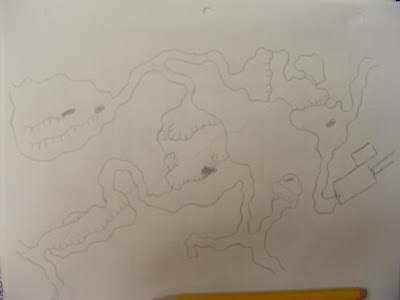 I did this section on plain white paper, and it was pretty freeing getting away from the grid lines of graph paper.  It's taking some time, but I think I'm getting back into the swing of map making.  I'm liking my efforts more and more as keep drawing.