Wanting to finish off the map to the area around the Temple of Pain, and explore the cave off the weird fog filled chasm, the party gears up and heads into the dungeon. Avoiding the rust monsters, Karl uses a potion of flying, and makes it over to the cave mouth. Not seeing anything immediately threatening, he tosses back a rope, and then begins to explore.

Turns out there isn’t much to explore. An old cave, signs that it’s been used as an animal roost, adventurer’s camp, and at some point someone installed a black stone devil’s face about 4’ tall. Karl carefully checks it out, and gently removes the mortar holding it to the wall. On the back, in elvish script is written “By admiring this artwork, you confirm that you are not Anish Kapoor, you are in no way affiliated to Anish Kapoor, you are not admiring this on behalf of Anish Kapoor or an associate of Anish Kapoor. To the best of your knowledge, information and belief this artwork will not make its way into the hands of Anish Kapoor.’

What a weird curse…

Hefting the stone face out of the cave and then back to town, they sell it for 400gp. To the best of their knowledge, it hasn’t made its way into the hands of Anish Kapoor.

Heading immediately back to the dungeon, they continue to explore around the halls of the Gentlemen and Lady Ghouls, but avoid their home. Instead they encounter oozes. Thankfully the oozes had, or at least were around, treasure.

Sometimes, you just have to toss in silly things into your dungeon, just to make it your own.

Gathering their gear, the party heads into Stonehell, and arrives in level 4 without incident. However upon arriving in level 4, they spot a pair of depraved berzerkers. Boris Holds them, and they’re tied up, questioned, and left to fend for themselves.

Deeper into the residential tombs, they’re surprised by 6 ogres on the far side of the portcullis. Ool gets dropped, Morgana uses a sleep spell, and then follows up with a scroll of Sleep to catch the remaining ogres. Boris injures the one not asleep, and Borumar stabs him through the heart. A healing potion is quickly poured down Ool’s throat. The defenseless ogres are killed and their bodies looted for a fair bit of gold.

The party also discovers the door to the Gentlemen and Lady Ghouls, but opt not to knock.

With some questions in mind, they head up to visit Rocky.

Q2 Where can we go to restore our abilities?
A2. In the Sepulture of Kion

Q3. What are the dangers
A3. Beware the smoke monsters, diedra, and mummies.

Departing town, the party heads for the Hobgoblin caves, only to discover a gargoyle perched over the door. It isn’t aggressive, and the party carefully goes under it and into the caves.

Heading down to the Temple of Pain to wrap up the map, they explore the deepest parts of the temple, finding the prison and torture chamber. The torture chamber contains all the expected devices, as well as some difficult to identify devices. Karl feels the need to poke all the items, and most of the party tries to leave the room before anything bad happens.

They fail. The device crackles, and bolts of energy shoot out, draining a bit of their life away. The device goes dark.

Departing the temple, they check the caves to the south, where 4 large crickets with feathery antennae begin to approach the party. Morgana tosses a dagger at them, and one of the creatures turns the well honed steel into red dust in seconds. Meanwhile Karl leaps up onto one of the bugs and rides it like a bucking bronco, shedding bits of armor as he goes. Morgana casts sleep, knocking one of the beasts out. Kili charges in to rescue Karl, bashing with his magic mace. The mace survives… Ool kills one with his magic mace, and magic missiles finish off the rest. Collecting the bits of dragon scale that Karl shed, they head back to town.

Continuing to explore the red temple, the party discovers a standing iron maiden. Boris investigates, and has the overwhelming urge to climb into the blade lined interior. He’s physically restrained from doing so, and dragged away. Then a wraith attacks, targeting Joho, who feels weaker from the encounter. Eiric removes the enchantment on Boris, and the wraith is dispatched. A bottle of perfume, and some coins are discovered hidden in the cell.

Further exploration finds the kitchen and mess hall. Morgana collects a small box of chopsticks. Various undead spirits are turned or destroyed. Circling around the party ends up back at the main hall. Taking the stairs up to explore the upper side of the temple, 8 shadows detach from the wall and attack the party. Boris finds his turning ineffective, and Borumar and Joho are hurt and weakened.

A quick exploration of the torture chamber and prison cells makes everyone feel queezy, and finding little of value, they head out and back to Kobold Korners. After some rest, they head back down to the Temple of Pain. The doors are again closed, but the wizards use their knock spells to open the way.

Continuing to explore the upper half of the temple, they find some small treasures, are set upon by a wandering Pain Maiden, find another in a common room, and easily banish a pair of wraiths, but not before Borumar has his strength drained by 8!!

Helping Borumar’s limp self out, they head back to town.

ReaperCon was online this year.

But it was free! Though the swag wasn't... 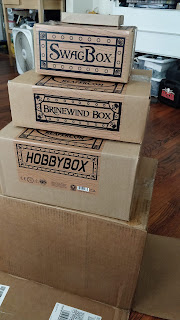 I signed up only for a couple of classes since I was a week out from my exam. First up was painting tartans. I'd attempted this once on my own, and... well, it wasn't a failure, but it wasn't a success. The end result of the class was a much more respectable showing than my first attempt. 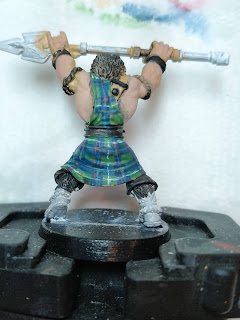 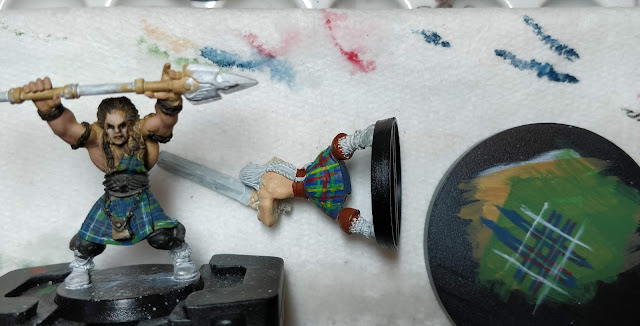 Following that was shaded metallics. This was an okay class, but I think the one that was the least helpful. A few tips and tricks I'll use going forward, but... eh. On the other hand, this was a mini I had very little interest in before, but he's the one I've actually finished from the weekend. Well, he still needs basing. 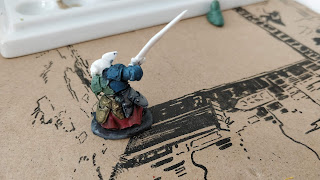 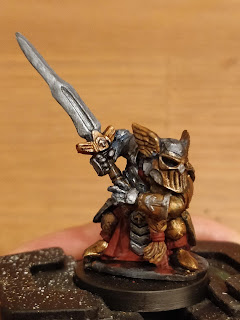 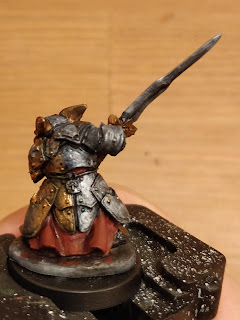 Following that was Galaxy Painting! This was a short but very fun class. Lasting only an hour, and using yet another mini I didn't really care about (how many bearded old wizards does anyone need?) I had a ton of fun. Probably not super useful, but sometimes fun is good enough. 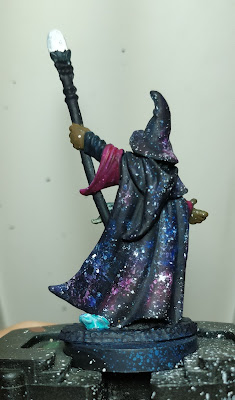 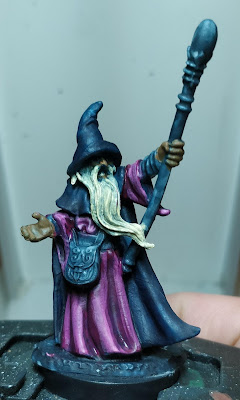 Lastly I worked on a mini for myself that fit in with the theme of the con, pirates! Razig's Dark Maiden! 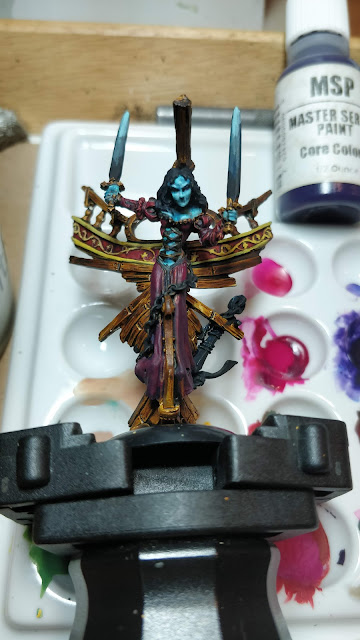 She isn't done yet, but I'm really pleased with her so far.

While virtual ReaperCon Live was fun, I missed seeing my friends, and all the other fun ancillary stuff that comes with it. With luck, next year will again be in person.


The party pools some cash and hires a sage to find out about the Ladies and Gentlemen Ghouls. After days of research, the sage reports that they’re what happened to an old sin-eating cult in the dungeon. They moved on from eating sins to actually eating people, and it gave them long unnatural life and wyrd powers, depending on what they’ve eaten.

Boris spends some of their downtime to craft a scroll of Cure Blindness.

Heading into the dungeon, the party arrives down in level 4 without encounter. Exploring the southern side of the living caves they discover a bridge over a fog filled chasm. Tossing some rocks into the fog, they hear no sound of them hitting bottom. Past the chasm is a large iron double door with the image of a 9 tipped scourge decorating it. There is a large lock. Borumar goes to check for traps and unlock the door, but is wracked with pain after touching it. Boris uses a scroll of Remove Curse on Borumar, and that seems to do the job. Lady Eiric and Morgana use Knock to unlock the door, and unbar it.

Past the doors, the hall opens up to the balcony overlooking a large worship area, complete with a blood stained altar. The area is lit with an unnatural reddish light that doesn’t seem to be coming from any particular direction. Boris, Borumar and Daton go down one of the stairs. At the bottom, a pair of spiked suits of armor charge the party from under the stairs. As with the door, their touch causes more pain than the damage caused would suggest.

The rest of the party joins them, and they begin exploring the temple complex. They are attacked by a pair of screaming ghosts. Boris turns one, the other is blasted away by Magic Missiles. Exploring some cells, they upset a nest of red centipedes. Daton is bitten twice, but he’s the only one to take a hit. They discover a matched pair of fancy surgical knives with ivory handles.

Game is paused in the dungeon…

54 years of Star Trek, and we're all stuck dealing with a pandemic... But no fear, as CBS has arranged a whole day of virtual activities to allow us all to celebrate together! 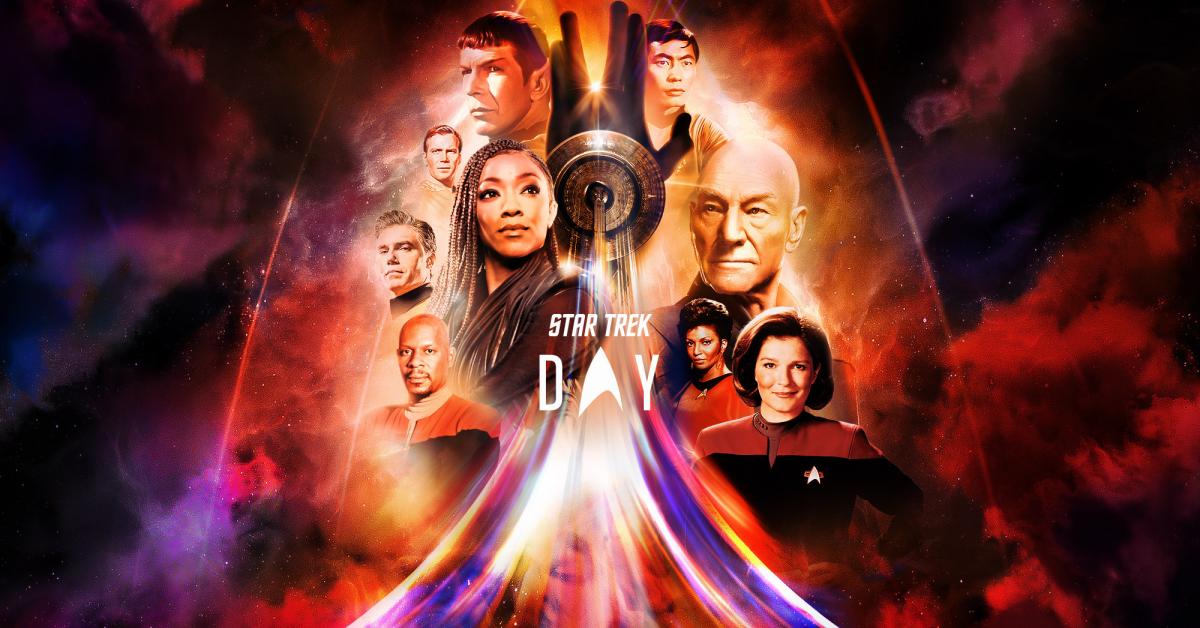 The pandemic continues. Summer is beginning to show signs of ending. The CPA exam is less than 2 weeks away. Don’t expect too much from me until that’s over.

Gaming
My Stonehell group has reached the casino! I'm super far behind on my session reports. But it's fun, even if it's only once a week.


Miniatures
I can’t concentrate on much of anything, so… I keep starting new projects. This weekend is ReaperCon, but next weekend is the exam, so… Probably not gonna get a whole lot done. 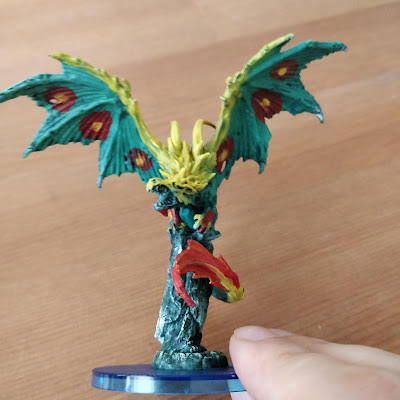 I also got in some new minis. The ReaperCon stuff of course, but a friend printed me up a Tau fleet! 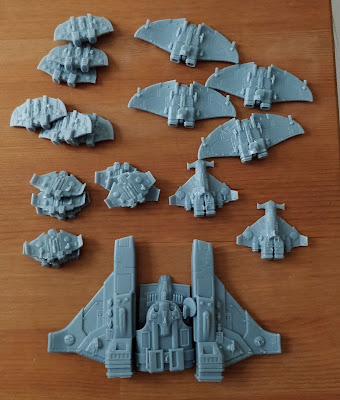 No idea when I'll get around to working on them, but... When I do, it'll be awesome!

Goals
Survive the pandemic
Pass the CPA EXAM IN 2 WEEKS!!!!