A week ago I decided to do a dry run at #Dungeon23. I have no idea if I'll include this little 14 room dungeon in my megadungeon, or add it to Stonehell, or what, but as I've completed the first week, I wanted to share it.

Welcome to the Poisonous Vaults

1. Stairs down open up to a massive fountain that dominates the north side of the room. Serpents & snakemen hiss a harmless water mist that blankets the floor 1' deep in concealing mist.

3. A pair of Medusa polish the copper serpent lamps and duct work (500gp value if carefully removed). All gates are locked. Stairs down to next week's level. The polish is caustic (as oil).

4. Copper lamps continue from 3. 1 not working. West side has dais with hooded cobra backed throne. Non working lamp has a 7,000gp gem wedged in the pipe. Removing it & not relighting the lamp will fill the room with gas. In 3d4 rounds will explode as fireball

5. Beyond the locked door is an area of magical darkness. 2 gargoyles flank the door. They hate the Medusa and will give the treasure away if given one of the Medusa heads. Along the N wall is an empty wine rack save for an ebony scepter wrapped with a gold serpent and topped by a goose egg sized polished garnet (900gp). The SW quarter of the room contains destroyed rugs, floor pillows, and couches.

6. A Medusa and her pet giant rattler are playing with a blinded giant rat. The rat has already been bitten and will die in 1d6 turns. The Medusa has a pouch with 76ep.

7. Blinded giant rats (14) pick at the torso of an orc. The petrified legs are leaning in the NW corner. 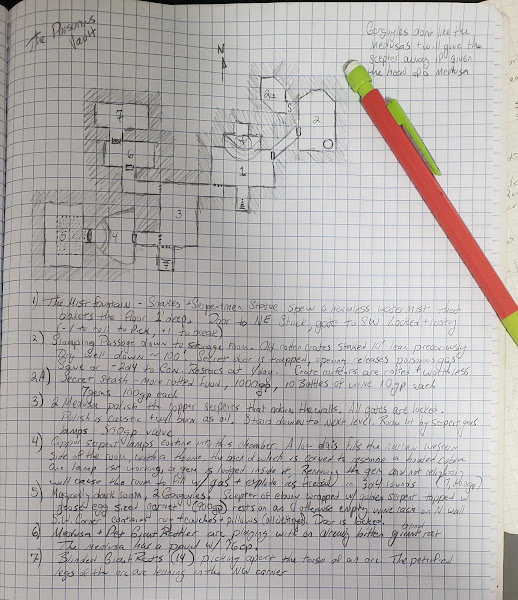 Wishing you peace and joy this holiday season, and a stocking full of toys! 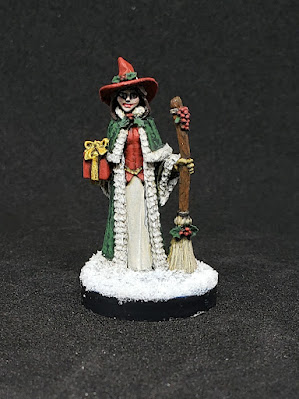 Email ThisBlogThis!Share to TwitterShare to FacebookShare to Pinterest
Labels: editorial

Stonehell: Mines out of Time pt 2

Having retrieved the magic hammer, they head back north, encountering a variety of undead and defeating them, pressing on. They eventually make it to an armory, finding a few usable items that got shared around the party, and a couple of magic items! Biffin ended up with the Ravenblade, Barcox with the Rainbow Blade, and Aroon got an ax of accuracy.  Morgana uses her Picture spell to take a selfie.

Backtracking they encounter a wraith that drops Rada and Barcox. Rada’s body is dragged away, but Barcox is left behind. They come to a foundry full of undead, and a massive reptilian creature with 4 arms and a horn on its snout. It pulled a blast of purple flame from the smelter and launched it at them. Knowing they hadn’t broken the stele, Morgana tried Dimension Lock on it, but the spell failed.

The party keeps moving, trying to avoid the blasts and claws of K’Taulut, smashing their way through some more undead. They finally find the Stele and Lorkoth jumps into the pit where it sits and begins to wail on it. Morgana tosses up a wall of ice to give them time. Lorkoth finally cracks the stele open just before K’Taulut smashed through the ice. It then took a lightning bolt to the face. A wave of energy washes over everyone, and they find their equipment returned.

Working their way back to the smeltery they destroy some more undead, collect the gold ingots, and Morgana summons a Giant Slug to clean up any other undead lurking around that they missed, and head for home.

Sean McCoy came up with an idea, a dungeon room a day, for a year. At the end of the year, you've got a 12 level, 365 room megadungeon. He posted this on Twitter, and it took off. He then wrote up a blog post about it here. 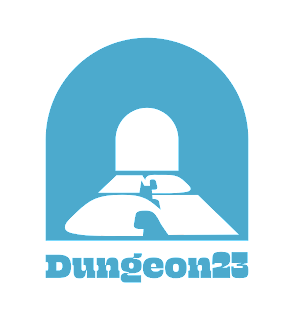 And as I love a good megadungeon, and can use a good kick in the pants to get posting more regularly, I'm joining in! I've even got my notebook all set up. 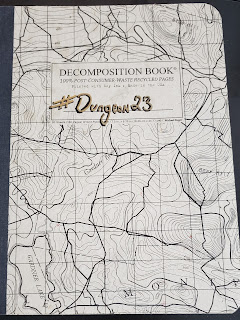 And the plan is as follows:

I'll be using the Tomb of Adventure Design and the Dungeon Alphabet for inspiration, and leaning toward Old School Essentials/Rules Cyclopedia as the rules set

Since it's going to be largely unplanned, I'm going to make a number of connection points early on that won't be identified until later.

As for the maps, I'm considering a number of options, from dice drop maps to whatever I can doodle out to reusing some maps I've drawn but never did anything else with before. I'll probably end up doing a mix by year's end.

The most exciting part about this is that it feels like that collaborative creative rush we used to have back on G+! I think I might start early, do a practice run before starting the project in the new year.

It is a time to be thankful, and there’s a lot to be thankful for. My family and friends are all healthy and safe. I have a good job that does good work. I have a house, space and some time for games and hobbies. I have a wife who encourages me to do these things that bring me joy. Hell, she even took care of our toddler for a weekend so I could head back to Maryland to go collect a bunch of my stuff that’s been in storage since I moved to NY! And now I have my whole RPG library back! 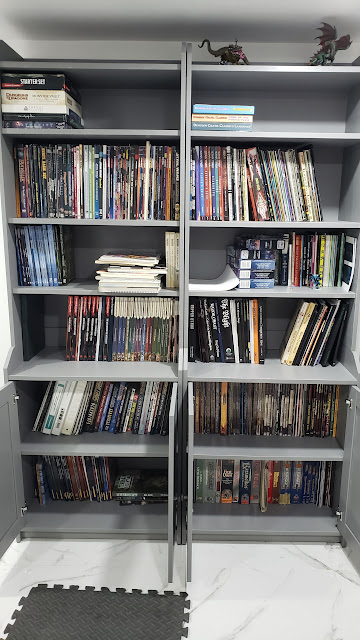 Gaming
Over Thanksgiving break one of my D&D players was in town, and we got to play 2 games of Stargrave together! Stonehell has also been rolling along, and you might have noticed I finally got back into writing session reports. More are on the way!

Miniatures
You know those projects that you start on and then sit on for… a long time? Well, I finally wrapped one of those up. A 3D printed statue that I got years ago. The print lines on it were fairly bad, and it was demotivating. Well, I finally got back to it. After a liberal coat of glue and sand, the texture was transformed from 3D print to rough stone. Add in a couple of nail art gems and some paint, and it’s looking good! 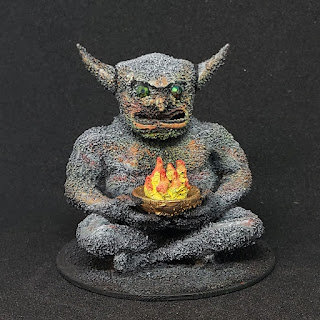 I also worked on a few other fun things this month, including a chicken swarm, which may be the silliest mini in my collection.

Goals
1 session report written up per week. At least that way I won’t fall further behind.
Play the next solo Stargrave adventure
Finish all my current WIP minis