Sometimes when I sit down to paint I'm not particularly motivated by anything on the tray in front of me. Usually it's because there's too much stuff on my tray. That happened to me last week, and I decided to do something about it.

I gave myself a reset. I cleared off everything, shook out the dust and shavings and put away almost all the paints (only keeping a couple whites and blacks), and moved all the minis that were done or weren't going to get worked on away. Then, I grabbed the 2 plague rats and decided to not only speed paint them, but do it with a limited palette.

I didn't do anything really fancy with them. Mixing the red, brown, and white got me their diseased skin color. A drop of green added to the mix helped to tone it down from the overly bright color it started as.The sores were painted first with the skin color, then pure red, then red mixed with white, then more white added to that. Tiny pinpricks of white on the pure black eyes helped to bring the eyes to life. A wash of the brown with a tiny bit of black helped to line the paws 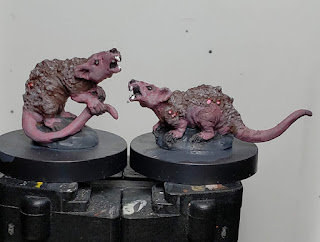 As is typical, I still need to do the bases on them, but otherwise, they're done!

Review: The Tower of Jhedophar

Another adventure from the stack of Frog God Games grab bag I got, The Tower of Jhedophar is another higher level adventure for D&D 3.5e, this time for mighty 13th-15th level characters. 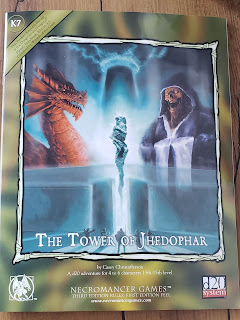 Designing adventures for high level characters isn't easy. And this adventure shows why. It's basically a very linear deathtrap with very few meaningful choices allowed to the PCs. The entire goal of the adventure is a powerful wizards staff, but the pile of magic items that can be collected along the way make it just an added bonus. 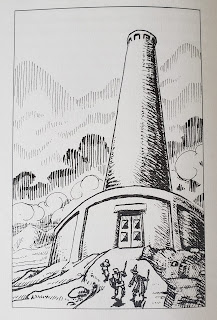 For more context, the impenetrable tower is surrounded by an equally impenetrable "labyrinth" that can only be entered through the front door. Or the giant hole the squatting red dragon (who also wants the staff) made. Once they enter the front door, a thick steel wall materializes, sealing them in. The labyrinth surrounds the base of the tower and once inside the disk, the party can go left or right. Once they've explored the outer ring of the linear "labyrinth" they can then explore the inner ring. Once past the monsters and traps there, they can enter the tower, which is even more linear than the "labyrinth" as there isn't even the choice of left or right.

There are some interesting new monsters, but that's about all that was good about this adventure. At least the writing was better than the Six Spheres.