Restocking on holy water and oil, and shelling out 4,000gp for 2 scrolls of cure disease, the party returns to the worm tunnel. With Lada in tow, Nick leads the party back to the triple locked door. It takes some doing, but he manages to figure out the sequence and get the door open. Through the door was  what looked like a study/lecture room. 4 lecterns stood empty around a large pool of bubbling ick. On the far wall was a bookshelf and cabinet. Skirting around the pool, the cabinet is opened, and some scrolls are found, then the bookshelf is looted. Unfortunately one of the books was coated in contact poison. Thankfully Koltic was able to negate that with a potion.

While all this was going on, the bubbling pool spewed forth a trio of zombies toward those at the bookshelf, and another toward the three amigos guarding the door. Nick tells the amigos to back up and close the door. They do. Unfortunately the door locks behind them, and there doesn’t seem to be a way to open it on this side.

Combat is joined, holy water and melee weapons win the day over one handed plague zombies. Even after a third trio emerges from the goop. Koltic, keeping back to provide support, bumps against a carving of a hand on the wall, and disappears. He returns moments later, slightly crispy and telling of a work room with a ball of lightning that zapped him. He doesn’t want to go back. With the zombies dead, and Koltic back, it was time to reopen the door. Sadly there wasn’t any good way to do it from inside, so out came the tools and magic ax… After a long and loud process, the door was opened. Permanently.

Everyone was nursing serious wounds as the last of the demons dropped. The stillness of the room was eerie after the chaotic and messy combat that, had it lasted another round or two, would have been the end of the party. They quickly get to exploring the room, discovering that under the pool was a summoning circle! Clearly this is the source of the contagion. Nick tries dumping some holy water into it. It bubbles and fizzes but has no other effect that he can see. After minutes of searching and looking and talking, the pool begins to bubble… With a curse and a prayer, Nick takes the hands off the statue. The bubbling continues to build. Nick asks Koltic to bless the hands, and then he tosses them into the guck.

There is an immediate reaction and the pool begins to contract on itself. The bodies of the demons, zombies and vermin all begin to boil away. In under a minute the pond is gone, as are most traces of what had happened. 6 black sapphires, the eyes of some of the chocolate demon babies remained.

An ax-master had arrived at the keep. Nick paid to spend time with them. Either Nick is the worst student in history, or the ‘master’ was a fraud. 2 weeks and hundreds of gold pieces wasted. Nick also funds Koltic’s potion making while he’s training.

Nick then spends a pouch full of gold to have the word spread about what a bad teacher they are.

Gathering up his companions, they head out to the worm tunnel. A troop of kobolds is working to create capture ponds to keep the muck from contaminating the area. One kobold, Marty, was suffering from a festering wound on his snout. Nick gave him a healing potion. Once back in the dungeon and past the fountain (with another damned swarm of roaches rushing past) they press on to the west, then up to the north, and to a pair of some sort of tiled medical/surgical suites.

Past those they come to a large chamber with 4 diseased zombies in grubby white robes. Koltic tries to turn them, and one says “Your god can’t help you here!” Crossbow bolts fly, and mostly miss as the zombies close on the party. Holy water does work, as do the party’s weapons (when they hit). Jameth ends up diseased before the zombies are dropped. Notably, they’re all missing their left hands.

The room’s walls are covered in murals of the white robed healers healing a variety of mythic and magical creatures. There’s a door with 3 locks. Nick decides to avoid that till he had one of the thieves available. To the south is a door that leads to a gallery with 3 small gold statues in lit alcoves on the south wall. A unicorn, pegasus, and a gargoyle. Sensing “TRAP” Nick turns right around and closes the door behind him.

Heading back to the main hall they check a side passage which opens into a large hall containing multiple diseased opponents, including giant rats, 2 more plague zombies, and one horribly bloated mutated diseased rodent. Backing up to take advantage of the narrow hall leading to the room, several vials of oil were checked in, burning the giant rats as they attempted to get to the party. Then the cancerous ROUS vomited past the fire onto the party. Jameth was again infected with the rotting disease. Crossbow bolts flew toward the monster then it closed on the party.Jameth still in front took the initial brunt of the attack and went down hard. Koltic dragged him back and healed him. Aroon’s 2-handed sword scores a critical hit, and lops the head from the disgusting beast. Following it slowly were the zombies. Lor’Koth threw his ax at them, missed. The ax hit the far wall… and disappeared. The zombies are cut down as they reach melee range.

Searching the room, the party finds some random treasure, including a magical spork, and a magic dagger.

In the weeks/months since the last session, the 3 Amigos returned to stonehell on their own, rescued their petrified friend Rada, and managed to ambush a small party of Vyrelia before returning to town. Biffin wrapped up his training. Lady Morgana has been studying and trading info with the planar spiders in the lost level, collecting notes on their home and civilization. While the spiders are still somewhat suspicious of her, the fact that she Dimension Doors to them by herself has gained her a certain level of trust.

Lady Morgana, not quite feeling up to taking on the ‘ethereal dragon’ in the lost level, rounds up the 3 Amigos and makes for the unexplored sections of level 5. They entered Stonehell through the Hobgoblin caves. At the disco room a group of goblins taunted the party from the far side of the room. Morgana drew a quick caricature of the lead goblin, then showed it to him. He stopped mid taunt, paused, pointed and laughed. “Eh, you’se guys are okay.” And he waved his companions away. Moving through the disco room, Jameth is burned by one of the lights.

To the elevator, where some skeletons were clustered. Koltic destroyed them. Taking the elevator down to the 3rd level, a plated monkey jumps in as the door opens. Aroon and Jameth land glancing blows against it, and then Borumar nails it with his sword. Morgana makes sure all the magi-tech components are thoroughly destroyed. From the elevator, they make their way around and to the stair shaft.

Down 200’, they arrive in the reptile decorated halls. Borumar attempts to pick the lock on the big fancy door, and fails. Exploring to the south they get screamed at by some mushrooms, find a dozen dead canaries in cages, and one clockwork canary.

Following a musky smell, they disturb a pair of owlbears! Who are Angry! The fight is short, and only Jameth is hurt by either beast. Kicking their way past the huge owl pellets toward the nest Morgana pokes through the nest and discovers an old chest. Inside is a bunch of electrum coins, a scroll, and a potion. Gathering their loot, they return to the big door, and Morgana decides to use her scroll of Knock and memorized knock spell to unlock and unbar the door.

Within they find a robe/changing room. Borumar finds a box of ritual items, including a small brass gong. He holds it up and hits it. Morgana looks on in disapproval. SHe pokes through the robes and viper masks, and finds one that is covered in gold and silver scales. They snag that. The door opposite was locked. Borumar easily picks that lock.

Have you ever wanted to play Stranger Things? Well, have I got the game for you! Ennie award winner for Best Family Product 2019 Kids on Bikes. 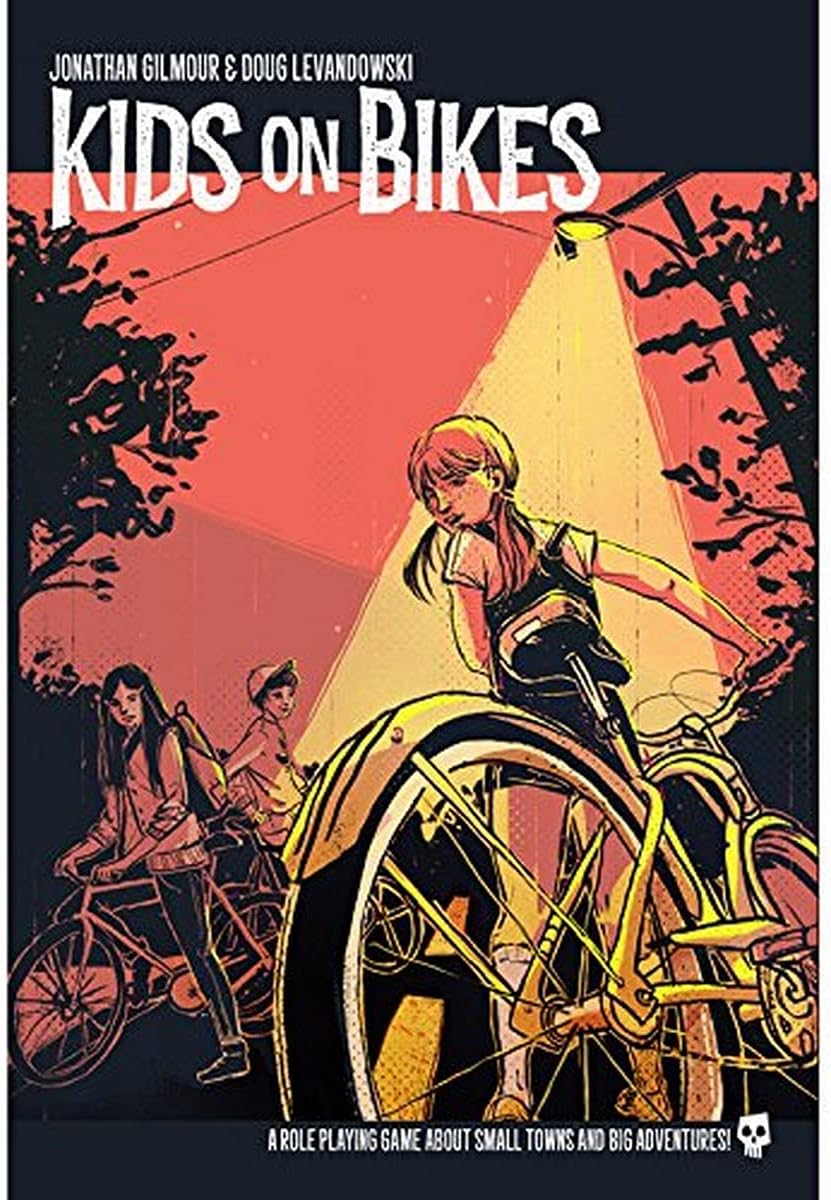 Now, this review is based entirely on a reading of the rule book. I haven't played or run it.

In under 80 pages the game is a concise little system in a slick graphic novel feeling format. Most of the rules are covered quickly, and about a third of the book (the appendices) is tables to help with world building and to provide some basic templates for characters.

The game does suffer a bit from being so rules lite. Much is left up to the Game Master to decide with vague suggestions about how they might go about it. Actions  are resolved by rolling the appropriate die against a difficulty number, and then comparing the variance of the rolls against one of the charts in the back of the book. For a rules lite system this gets a bit complicated. I suppose if you play enough you'll memorize the chart, or at least have a good enough feel to wing it, but at least at the start I bet it'll feel clunky.

All in all, this is an interesting game that I'd love to try at some point. It puts a lot of work onto the GM, and I don't necessarily see it having good long term campaign playability (especially as it seems to lack a leveling up/getting better mechanic) but for a short campaign or one shot? It'd be fun.

And here’s Omicron. Needless to say, the pandemic continues. But, I’m boostered, so I’ve got that going for me. And this is super late being posted, cause of the holidays...

Gaming
Stonehell remains on pause, but Nick’s explorations around the side dungeons of Rappan Athuk and his consolidation of power around his broken castle continue. More session reports to come on that.

Additionally I ran a game over thanksgiving for my neiflings, which was fantastic, a bit inspired by Wild Beyond the Witchlight. I’ll be posting about that a little later this month, once I finish writing it up.

Miniatures
Got a nice assortment of minis done for the month. Tried something new, did a teeny tiny bit of OSL, and some more NMM. Overall I’m pleased. 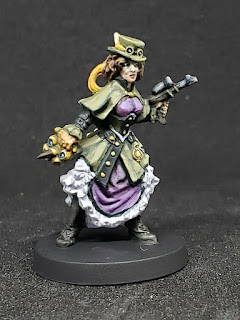 
Goals
Paint some minis
Play some D&D
Enjoy the holidays!