Morgana uses some of her earnings from the ethereal dragon to craft a scroll of Summon Slug. Joho hires some meatshields, while Borumar buy’s Mr. Sinister the wardog, and sends Captain Morgan for training. Koltic gets drunk, and makes some healing potions.

Further in down on level 3, they stumble on some bugbears. Morgana sleeps some of them, and they begin to talk, but negotiations break down, and before they can do anything with their monstrously long reach, Morgana roasts them all with a fireball.

Continuing down to level 5, they bump into a squad of Vrilya near the mines, talk their way past them, and continue down toward the Vrilya’s upper area, and trigger the Scroll of Mapping they’d recovered from the dragon’s hoard. Exploring some of the revealed spaces, they stumble on a minotaur camp. Morgana roasts them, dropping 3 out of 5. The remaining two rage into melee but are quickly cut down. They find a hidden lockbox, and haul it out. Deciding they’ve had enough for one trip, they head back to the surface, killing a squad of hobgoblin scouts, and looting their arms and armor.

Back in town, Joho gives Morgana 10,000gp for her research.

"This? No, this was about a year after the dragon." The old woman shifted on her stool, adjusting the peg leg that was rubbing her stump the wrong way. "Certainly one of the least glamorous creatures to ever crawl through the Underdark, but also one of the nastiest." She nodded at the incredulous looks. "Yes, worse than the dragon. Hoarfrost was smart, mean, and powerful. He'd terrorized the Kelban Reach for decades. Finding his lair was a feat in and of itself, especially when you consider the albino kobolds that worshiped him! But the thing about them was that you could basically see from their point of view. There was a brain, and a motivation... The worms? They're just vermin. Almost alien they're so far removed from us."

Pausing to drink from the earthenware mug, one of her audience asked "But if they're just worms, what does it matter what they think?"

"Oh, I suppose it doesn't, really. More that it's impersonal. You're face to face with something that doesn't care, that just views you as food. Plus, unlike Hoarfrost, there was lots of them. And if you don't kill them all? Then they'll just come back." 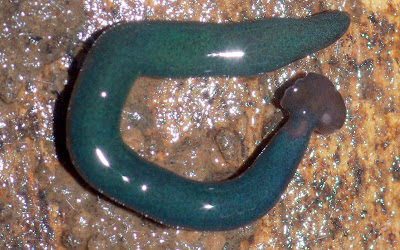 In combat, the worms will attempt to knock down their opponent (save vs paralysis on any hit that causes more points of damage than the target has hit dice or be knocked down), and then eat them (free attack on any target knocked prone). They are blind, with an incredible sense of smell. The Hammerhead Dungeon Flatworms are resistant to non-magical weapons (1 point of damage per hit), fire, poison, and 1st and 2nd level spells. Unless completely destroyed, the heads of the worms can regenerate a full body at a rate of 1hp/day.

Ranging in size anywhere from 1' to 15' long, and 6"-12" thick, they're usually about 1/10 as wide as they are long. Their distinctive hammerhead appearance is the result of 2 bone-like growths that the worms use to both dig, and also to bludgeon their prey with. Infested areas usually have a strong sweet & sour smell.

Hammerhead Flatworms are said to be the spawn of the Great Worm, though some claim they're actually just worms that ate of the Great Worm, and absorbed some of its power. Whatever the case, these worms are invasive, aggressive, difficult to kill, and nearly impossible to be completely rid of. When they spread to a new area, the best case scenario is containment and regular eradication. A single surviving worm is able to repopulate any underground space. Worse is that they have no natural predators as they taste terrible.


This post has been inspired by this story.
https://www.livescience.com/62635-hammerhead-flatworms-invade-france.html

In honor of my new house, I decided that the first mini I paint here had to be something kinda special. And by special, I mean BIG, since I finally have the space to display my big minis. I don't yet have the display shelf/cabinet to display it, but that's coming... eventually.

In the meantime, let's get to it!

The first thing that needed doing was cleaning up the mold lines. For the most part they weren't too bad, and were only noticeable on the tentacles. As you can see though, this is a pretty big "mini." The base is over 4" and Mudgullet definitely hangs over it on all sides.

After taking care of the mold lines, it was a quick dry fit to see how it all went together, and see how the gaps looked. Again, not too bad. and again the biggest issue is the tentacles. Nothing a little greenstuff can't take care of. However, before I glue the beast together, I wanted to see where painting would be an issue. Obviously the underside of the body and inside of the legs were the worst. The mouth might be a problem too.

Time to slap some paint!

I went ahead and skipped priming, and dived in with Olive Shadow, which seems to be out of production. I considered Olive Drab and Troll Skin as alternatives, but Olive Drab was too bright and Troll Skin didn't have the dirty brownish tinge I wanted. Initially I tried Ogre Skin on the underside of the tentacles straight over the white Bones, but it was too bright. I then painted it over the Olive Shadow, and got a base color much closer to what I was looking for.

For the non-rocky parts of the base, I slathered on Muddy Brown. Unfortunately the base was kinda warped. Nothing for it but to glue it onto a bigger base. A 5" base. Gonna have to come up with some custom stats, as the 5e version is only supposed to be on a 3" base.

That's a 4" base in the background.

I'm not really sure what a froghemoth's mouth should look like, but this mix of Gothic Crimson and Monster Maw works I think. Also I started working on the teeth and spikes.

But as you can see here, only got so far. They were all base coated with a mix of Walnut and Russet Brown, working it's way in layers toward Dirty Bone.

And then there's the gap filling. Both around the neck and the tentacles.

Karl creates a set of “dragon hunting hats” for the party in anticipation of going after the ethereal dragon. Koltic spends the week making healing potions.

Heading down through the caves into the lost level, Karl gets himself covered in bubbles while Joho holds onto him with a rope, pulling him along like a balloon. On the way to where the dragon is laired, they run across a troll. Joho uses Karl to swing himself into the fight with it. Thankfully the troll is rather dumb, and alone, and in spite of it’s regenerative powers, they manage to hack it apart and burn the body. They find a nice stash of treasure, including some gems and a fancy fur coat (in need of a cleaning).

Approaching the dragon's lair, the party splits up to come at the dragon from 2 directions. Karl comes in through the upper bridge area, while the rest of the party attacks from the stairs. Koltic blesses the party, protection from evil spells are cast, and Morgana drops invisibility on the squishy members of the party. Biffin drinks his potion of heroism, and Karl inserts his Buttplug of Protection.

The dragon hears Karl, and breathes a weird oily rainbow at him, which hurts and pops the bubbles. Biffin, from behind, hits the dragon with oil. Morgana attempts to Dimension Lock the dragon, but the dragon saves, this time turning to breathe on the rest of the party. More attacks are launched at the dragon, most miss, those that hit don’t do full damage due to the dragon's ethereal nature.

Morgana uses her second Dimensional Lock, and this time the dragon fails. It roars in anger and rather than again breathing on the party, it charges in. (they’re lucky it was a young and stupid dragon, and the dice favored them. Had it breathed for the 3rd time, most of them would have dropped, even if they made their saves.) Once in melee, and vulnerable to the party’s weapons, the dragon was quickly slaughtered, the final blow coming from Karl as he ran up the creature’s back and hacked into its spine.

Sadly the dragon’s hoard was all sitting in the ethereal plane. On the positive side, there was a crack between the ethereal plane and the dungeon where the dragon came through and a silvery fog emanated from. Morgana thought she could work something out to get at the treasure. THe dragon’s body was slaughtered for interesting bits.

Poking around the lair, the party disturbed 4 angry shadows, but they’re quickly destroyed.

Returning home, Morgana spends a week developing a potion of ethereal travel based on the dragon’s bits they came back with. Making a speed run back into the dungeon, Borumar gives Joho his elephant, and Joho takes the potion, and retrieves the treasure.

Rathgar slammed into the heavily armored skeleton. "Allianora! Feris?!?" He yelled as it pushed back against his rush.

"It isn't working" Allianora replied, dropping her holy symbol and gripping her mace. "I can't turn them here."

Nimble slipped past Rathgar and his opponent, jabbing a dagger through the gaps in the armor as he passed, with no effect. The skeleton's armor clad elbow slammed Nimble in the face in return, sending the rogue sprawling, blood gushing from his broken nose.

Streaks of golden light shot out from Feris' outstretched hands, and shattered against the armor of the skeleton. "Frelling great..."

The second skeletal knight shoved it's way into the melee, jabbing it's blade into Rathgar's shoulder.

Barrow Wardens are the lesser knights raised in service to a greater undead power, serving as bodyguards and guardian of important sites or treasures. While they are "lesser knights" they are still powerful undead themselves, and are never found working alone. In addition to the usual undead resistances, they're immune to first level spells. They can be turned as vampires outside of their barrow, but can't be turned within it. The mere sight of them is enough to cause fear (save vs spells to resist). In combat they retain their martial skills they held in life, and are usually found in plate mail with a shield and melee weapon. They attack twice per round, and crit on a 19 or 20.

Poison Ivy Sucks! This has unfortunately been the main theme of the second half of the month, and it’s been a busy month too. One of the joys of having a house is having the space to actually have guests over! And over the course of the month we’ve had both friends and family visiting.

Gaming
Stonehell keeps rolling along. I also got to pull Nick out of mothballs, and explore some of the Rappan Athuk campaign area. Still avoiding the core dungeon… Not on purpose, but seems to keep happening.

In addition to that, I also got a game of Pandemic in. We played a 4 person game, and were *this* close to winning, but lost in the end. We decided to keep playing, and then had a massive outbreak cascade that overtook basically all of Europe.

Miniatures
One of the friends that came over spent a great Saturday evening painting and watching Arcane. I got a bunch done, some of it better than other. And I still need to finish my froghemoth. 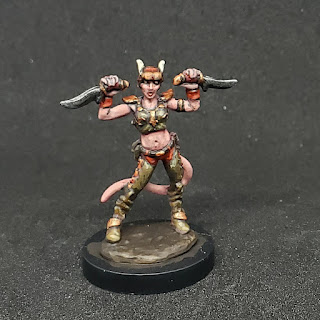 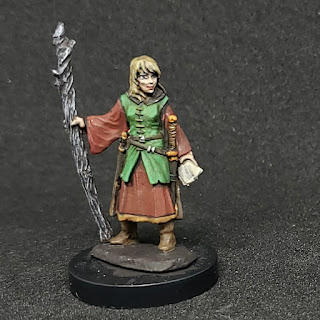 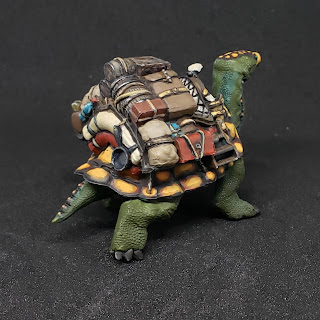 Goals
Paint some terrain, and play something on it. If nothing else this month, I want to do that.