I was talking with my co-DM about weapon trainers, wanting my character Nick to get some training, but there isn't anything that suggested how likely the PCs were to have on available locally. So, I came up with a chart. I'd had a half formed idea already, since several of my players have taken advantage of the weapon training rules, so this really just codified the idea.

Keep in mind, the arrangement of weapons into the different categories is based on my campaign

Chance of finding a weapons trainer in a large town. Chances reduced 50% for small towns, and 75% for villages. Cities add 10% base chance shown below.

While Nick had been preparing to face the spiders, a message arrived demanding he see the druid. Nick gathers a few of his friends, and heads down the river, following the messenger. Down the river, into the woods and straight into the area that the druid had identified as the spider’s nest. Instead of a nest, they saw a great big hole. And standing next to the hole, the druid, and some of her wolfish friends. Apparently some of the local purple worms have been acting weird, and one of them came and took care of the spider problem.

Bad news is that she wants Nick to check out what’s messing with the worms. So, down the tunnel they go, with a stack of purple worm antivenom. Hundreds of feet down (at a thankfully gentle angle)  the tunnel wall falls off and the side of a (dead) purple worm can be seen. Pustules that still ooze cover the body.

Further down, the worm tunnel clipped the corner of a dungeon room. Within was a dry fountain, a couple of doors, and a slowly flowing stream of the same sort of ooze that flowed from the purple worm’s pustules. The stench was nearly overwhelming, but the company decided to look around. Through the eastern door, the party found a smaller room with some diseased rats and a chocolate brown demon baby.

The fight was brutal and blessedly short. Koltic was unable to turn the demon, but weapons were effective. Borumar severed a foul horn from the demon’s head and wrapped it in thick leather. The demon baby was guarding a fair haul of treasure, and after it was all scooped up (except for the copper) the party returned to the surface.

The druid Druzilla was unimpressed with the slaying of the demon and tasked the group to find the source of the ooze.

Off to a wedding!

It isn't every day that 2 of your players get married, but today happens to be one of those rare and lucky days. In fact, as this post goes live, the ceremony should be starting...

I'm so lucky to have you two as both players and friends, and I'm so happy you two found each other.

Now, quick poll for those readers I have... should I give them an in game wedding present?

A while back, when Stargrave first came out, I decided to make some space gnolls. Nothing too crazy, just mercenary arms on gnoll bodies. And because I kinda hate the thin Frostgrave/Stargrave plastic bases, I put them on Reaper 1" bases. I then used the clipped off bits of integrated base to add some stone ruin bits onto the bases. 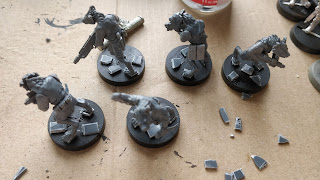 Then I glued on some gravel. 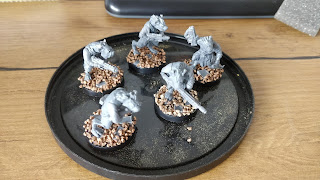 And spray primed them black. 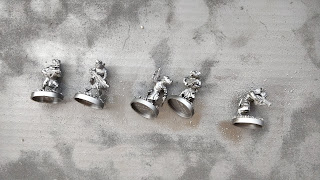 I wasn't really sure what to do with them next, so I started with the fur, figuring that was easy, and then onto the clothing. 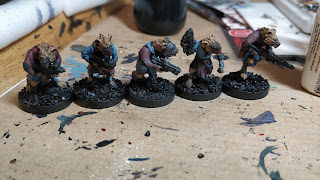 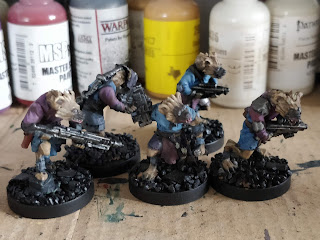 It took a number of tries to get the colors I wanted. I also decided, well into painting in progress to add a greenstuff wire running from the pouch to the hood on the hooded gnoll, and then to bulk up the stump the gnoll on the far left of the pic below into a full stone block.  The weapons were painted with a gunmetal color, and then highlighted with...  maybe Blade Steel?

Sadly I don't remember, and didn't write down the exact colors I used, but any future gnolls will be painted in different colors anyway.

Leaving Lady Eiric’s manor, the party heads directly to the main entrance of Stonehell, and to visit Rocky. After the usual pleasantries, they get to the questions!

Q: What do you know about the fog dragon?
A: More than you

Q: Where is the cauldron?
A: Taken

From Rocky’s chamber they head down to the lost level. Poking around to fill in the map, they stumble on some hobgoblins, who are quickly cut down. Then more hobgoblins show up, and Gimble sleeps most of them, and the rest are killed. One is interrogated, and they learn that it’s another part of the Hobgoblin Occupational Army, a scouting division looking to find out what happened to the legion that was sent before. The still living hobgoblins were tossed in a closet, and locked in. Maybe they’ll escape, maybe they’ll die in there….

Using Invisibility 10’, the party continues their exploration, hearing some awful singing. Gimble thinks the harpies are making the most beautiful music, but is dragged away.

Next they find a crying room. The spirit of a little girl, long trapped, was comforted and released from the curse holding her. In return, the girl shares the treasures she’s collected, including her doll, but also some gold!

Doing a bit more exploring they lift up a stone slab, and find steps down down down to a cave with lots of giant locusts. Running away, as the bugs start to jump up at them, they lower the slab on the bugs. Deciding they’d had enough for one trip, they start to head out. As they reach the gargoyle room, a troop of shadow dwarves is entering the lost level. The groups keep a wary eye on each other, but allow each other to pass without conflict… or even comment.

Gains: electrum from the hobgoblins, gold and a doll from the ghost
Kills: Hobgoblins
Losses:

Borumar drops another 500gp at the spa to help them fund their operation. People are going to be coming from town to go to this spa… Biffin hangs out at the bar, trying to look inconspicuous.

Meanwhile Morgana and Gimble visit the wizard’s school. Lady Sabine meets with them, they chat about the dungeon, see if there’s anything they should know. She asks 2 favors of them. The first, to drop off a letter with the mage’s guild along with a renewal payment to reactivate her membership. The second, to bring her the ogre’s cast iron cookpot if they should happen upon it. She wants it as a potential focus for necromatic magics.

After collecting Borumar and Biffin, they head back to town, drop off the letter, check to see if there are any ranged magic weapons for sale (there aren’t). They then pack up and head to the Lost Level.

Passing through the Gargoyle Bubble room, they circle around to where the thieves had previously ambushed them. Hearing arguing voices from behind the door, Morgana prepared a sleep spell. Throwing open the door, the party was met with an arrow. Morgana let loose the spell, and they heard several bodies hit the floor. Moving in an angry dwarf tossed an ax at them, and then an invisible woman with a short sword stabbed Morgana. The dwarf and Biffin closed on each other, the dwarf seriously wounding Biffin. Morgana lashed out with her staff, and then her Cockatrice bit the unfortunate backstabber and turned her to stone. The dwarf was then knocked out, and he and the two sleeping humans were tied up.

After healing up a bit, they woke the youngest looking human. Another adventuring party, having bought a copy of their map, decided to see what was to be found, but they lost their copy when their wizard was killed by a ‘fog dragon’ in the abandoned library. Feeling a little bad about having basically wiped their party, Morgana offers to help them get out of the dungeon, and he accepts. They leave Rada the stoned thief behind to hopefully return and return her to flesh.

Back in town, Morgana commissions Boris to make her healing potions. Building a new temple is expensive, and the income is welcome!

Stonehell: Interlude in the Korners

After returning from the Crypt of the Bloody Claw, Lady Morgana spends the next 2 months in recovery from the withering assault at the hands of the vampire, and working on some new scrolls to replace those that had been used up. Gimble spends the time learning new spells from Morgana’s spellbook. Borumar mostly goofs off but does hear that the returned scion didn’t recover as well as the other captive brought home, and the family has mostly pulled out of public view while they try to find a solution.

Finally, they decide to head back to Stonehell itself! On the way, while crossing the causeway through the swamp, they spot nearly a dozen ghouls making their way toward the party. Morgana drops a fireball into the group, and they are no longer an issue.

Down through the main stairs, they make their way over to Kobold Korners, killing a giant ferret on the way. Keeper Nolti looks even worse than before, but is thrilled to see the party. Over drinks, they discuss some of the happenings in the dungeon. Lady Morgana asks about Scintillating Orbs and hidden levels, and Nolti tells her what little he knows.

Borumar hangs out at the spa. Morgana plans a visit to the mage school.

Sadly, the pandemic continues. Thankfully work has decided that we don’t need to go back to the office at all this year. Summer weather has broken, and we’re now well into fall. The air has that crip feeling to it, especially in the mornings. And Pumpkin beers are back in stock!

Gaming
While Nick didn’t get any table time this past month, I did get to take Fulhoff out for a spin playing in a game with my neighbors! https://towerofthearchmage.blogspot.com/2021/09/meeting-neighbors.html

Things in Stonehell are going interestingly. It’s fun seeing one of my old school players take a bit of a story and running with it. Maybe what he heard was right, maybe it wasn’t, but his idea was solid and I’m looking forward to it playing out.  We’ll see if their plan actually works out for them. It might work spectacularly. It might fail just as spectacularly.

The new supplement for Stargrave arrived! Quarantine 37, which has both zombies and space bugs to play with. I’m gonna need to get some space bugs. I already have lots of zombies. Not space zombies, but… we’ll see.


Miniatures
I’ve gotten some stuff painted, but very little I’m super happy with. I’m actually taking today off, and while I’m not going to paint another dragon, I think I’m going to spend some time working on a mini that hopefully I’ll feel happier about. 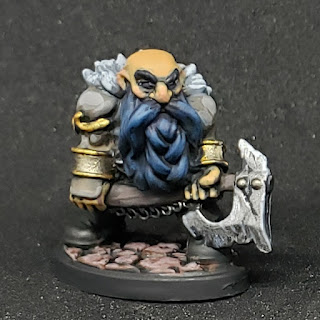 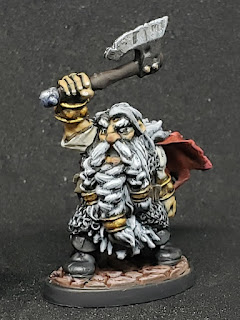 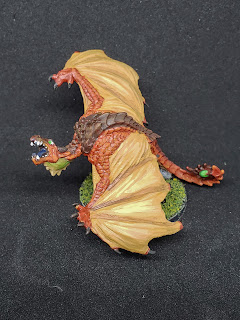