Dragging on into year 3, the pandemic continues. It astounds me how this long into it people are still such morons, both individually and collectively.

Aside from that, I rolled over some vacation time from last year and spent a day of it for myself. I ordered a pizza, watched The Witcher (season 1) and painted some minis. Great way to spend a day.

Gaming
A few absent players returned to the dungeon, and a dragon was hunted in my Stonehell game! And boy oh boy did they get lucky.

Miniatures
I started the year off right by painting up a squad of Rent-a-Space-Cops for Stargrave, then followed it up with a bubblegum pink ninja. I also pulled out a quartet of sorceresses that I was feeling inspired to work on. One area of painting I’ve been deficient in is faces. Especially female faces. So I’m going to take this year to improve on that. 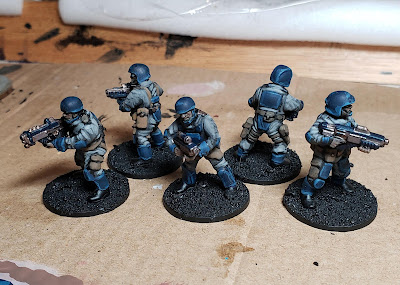 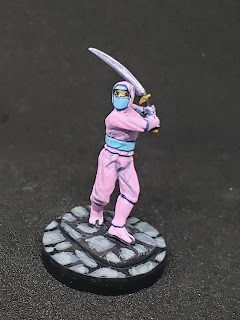 Goals - This section doesn't really change much
Catch up on session reports
Finish all the minis I started this month, and all the minis I have planned for Feb
Play some D&D

Review: The Six Spheres of Zaihhess (It's So Bad!)

Over the holidays I picked up a big stack of Frog God Games books for pretty cheap. It was a random assortment of stuff, but thankfully most of it was from their Sword and Sorcery side of things.

Mostly setting books, with a couple of adventures tossed in. One that caught my eye was an older 3.5 edition D&D adventure for characters leveled 7-10. Nothing too original in the basic concept, hunting down an artifact from an old evil cult and stop them summoning a big bad monster.

But right from the start I knew things were going to be bad.

The writing doesn't get better. Between the clunky language, typos, and just incorrect word usage, it's jarringly painful to read. Whoever (didn't) edit this should be fired. Reading through it, I find myself wondering if this was written in another language, and someone used Google Translate it into English, and then they just... published it.

Seriously, there is no excuse for this (above) or this (below). 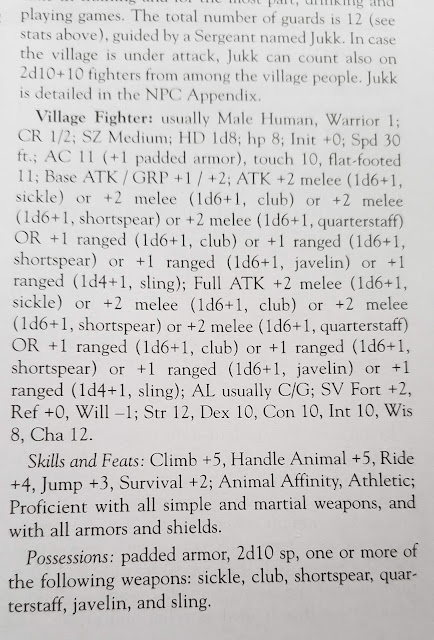 I know this was at the tail end of the 3.x glut, but this is ridiculously unreadable and unnecessary. And, yes, some of this comes from viewing this through my predominantly OSR sensibilities, but I can't imagine anyone used this stat block.

Speaking of stat blocks, the main settlement has a trio of merchants that run things. For some unknown reason only 2 of them get full descriptions. There is a line at the beginning of the section that says "only the major NPCs with whom the PCs are likely to interact are fully detailed, but it's so arbitrary to only have 2/3 of them included.

This also brings me to the organization of the book. A mess, just like everything else. The maps are all in the back, and the descriptions are all over the book. Which leads to lots of flipping back and forth. Not only that, there's nothing telling you which page the map you want is on. And on the flip side, the maps don't give you page numbers of where they're referenced in the book.

The adventure itself is a railroad in the finest traditions of railroads, and weirdly, is written with numerous bits of "how to run this adventure" type text that would make far more sense in an introductory adventure rather than in one designed for 7th to 10th level characters. For example this bit.

I'm only about 1/3 of the way through the adventure so far, but there are a number of instances where stuff happens around the PCs and they can have no impact on the event... Also, spots where the adventure tells us, for example, that an NPC will absolutely NOT do a thing like sell their magic items. But then it'll give a (Diplomacy Check DC 40) immediately after.

If I had paid good money for this on purpose, I'd be so pissed off. As it is, I'm going to finish hate reading it to see if there's anything worth stealing (there's gotta be something?!) I'm also really tempted to take the adventure, completely rework it for classic D&D while also making the damned thing usable and good. I won't, as I'd rather come up with something original, but I'm tempted...

Armor Class: 4
Hit Dice: 6 (M)
Move: 90' (30')
Attacks: 2 Claw
Damage: 1d4 or 2d4+2 when ignited, plus
No. Appearing: 2d4 (2d4)
Save As: C6
Morale: 12
Treasure Type: Nil
Intelligence: 0
Alignment: Neutral
XP Value:
Monster Type: Construct, Very Rare
Coal walkers are crafted from the bones of those who have died by dragon's fire. A wizard who collects these bones must process them through a variety of magical and alchemical rituals that include infusing them with coal dust, turning them coal black. The animation process is not necromatic, and despite appearances, they can not be turned. As constructs they are immune to sleep, charm, and hold spells, and because of their unique construction, they are not harmed by fire. They take half damage from non-magical weapons.
In combat, Coal Walkers will ignite after taking damage (or being the target of a fire based attack). They will burn for 10 rounds before needing to recharge 24 hours. While burning, they will constantly cause 1d8 damage to anyone within melee range every round. The damage stacks, so if more than one coal walker is in range of a PC the PC will take 1d8 damage from each.
Additionally each can produce a 15' cone of flame that will cause as much damage as HP remaining. This will snuff the Coal Walker's flames.

My players finally faced the Ethereal Dragon I had take up residence in Stonehell's Lost Level. Thankfully they'd come prepared with a Dimensional Anchor spell that allowed all their attacks to hurt it! 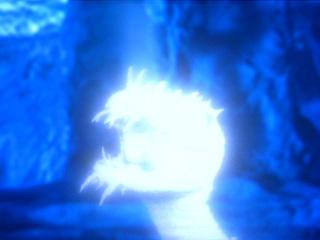 Ethereal dragons are rarely encountered in the material planes, but when they are, they appear as white scaled serpents that gently glow. Their backs are ridged with short spikes, as are their legs and claws. Lacking wings, they're often not recognized as dragons, much to the woe of those encountering them. They are rarely speaking dragons, and somewhat lazy as few of the creatures they encounter can hurt them. When they come through to the material planes, they do it to hunt and steal. Because of their unique physiology, attacks on them from the material plane only have a 50% chance of actually causing any damage, unless made with a weapon designed to injure ethereal creatures.

The ethereal dragon's breath weapon is a line of oily rainbow light. While colorful, it will look wrong to anyone from the material planes. Anyone struck by the dragon's breath weapon will take the usual amount of damage (dragon's current hit points). Additionally the light is draining to creatures of the material realms, and will cause their Strength, Dex, and Con to be halved unless a saving throw is made. Lost ability points will be restored at a rate of 1/hour.

It wasn't the best year as far as making blog posts about the minis I painted, but I still painted a bunch.

It was actually hard to get a fully accurate count in part because I was so bad at documenting it all, and also because I moved this year and had to pack away everything. I know there are a couple minis in these pics that I actually painted at the end of 2020, and a couple that I didn't pull out that were definitely painted in 2021.

All in all I'm pleased with my progress. Somewhere around 100 minis (I really should update my spreadsheet). Mostly Reaper minis, with some Frostgrave tossed in for variety. Aside from the fact that I have a lot of Reaper minis, I've been focusing on them because Reaper ran a challenge league this past year (and will be again this year) where you can earn points for raffles at the end of each quarter.

So far this year I've already managed to paint 5 minis! A troop of Stargrave mercs painted up as Rent-A-Space-Cops. 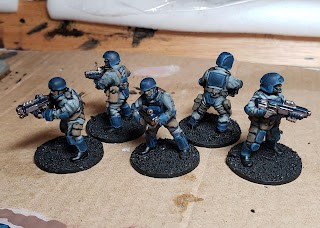 Still need to finish their bases, but it's starting the year off right!

Well that was a year, wasn't it? Bit of deja vu all over again. For a little while there it seemed like the pandemic was maybe nearing it's end. Most adults were vaccinated, many were boostered, kids were getting the shot... I went to a wedding, a concert, and even a movie!! It was starting to feel like maybe I could even venture to the game store to play something... But then, right at the end came Omicron.

Politically things quieted down a bunch. Fewer protests and marches. Some signs of actual justice for those murdered by the police. Not great, and not a systematic change, but hopeful signs. Yet at the same time the democrats seem incapable of doing what's necessary to reinforce democracy.

On the personal side of things, watching my child grow has been amazing. It's amazing watching him develop, and seeing how he goes from one stage to another. At this time last year he wasn't much more than a meatloaf. Now he's toddling around and getting into everything.

As with last year, we spent the holiday at home, this time because of a pair of covid exposures. Thankfully everyone is fine, but I'll be a lot happier when they allow the youngest kids to get the vaccine.

There has been a solid amount of D&D this year, both running Stonehell, and playing in Rappan Athuk. And I'm almost completely caught up on my session reports. For Christmas I got myself a stack of Frog God Game books (almost all from a grab bag)

I've also been playing a bit of Torchlight 2 and Rebel Galaxy.

I painted somewhere in the neighborhood of 100+ minis this past year. Not bad, all things considered! I'll post about that more next post.

I only managed 15 books last year. Gonna try to do better for this year. Plenty of movies and TV shows. The new Star Trek series continue to impress me. The Marvel shows have been solid. Really looking forward to seeing what they both pull off this year.

Continue to be a good father, husband, and friend. Try to read a little more. Stress a little less. Maybe work on my freehand painting, and do more basing.