Giants in a Hurry

Yet again I find myself painting minis that were very low on my to-do list, but when your DM hands you a giant and asks if you can slap some paint on it…

So when she handed me the Frost Giant King I figured that this was as good a chance as any to slap some paint on the storm giant from Bones 1 and the Fire Giant from Bones 3. I started by washing all three in warm soapy water, and giving them a good scrub with a toothbrush. After letting them dry I primed them with Reaper’s Liners. Red for the fire giant, blue for the storm giant, and grey for the frost giant. This was my first time using Red Liner, and sadly I found it to be even more troublesome than Sepia Liner. Not only did it not stick as well as the Brown/Grey/Blue liners, it also smells really bad. Once I realized the issues I was having with the red liner, I reprimed with Grey Liner.

I also glued the Storm Giant to a base, because he kept falling over. 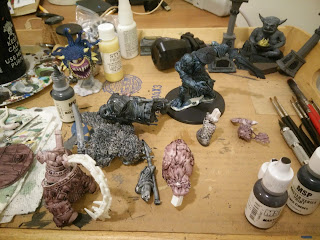 There aren’t very many pictures because I was focusing on getting them painted well enough for game on Wednesday, and I only had Monday and Tuesday evening to sit down and paint.

First up was Monday’s progress. I didn’t track all the colors I used, but the storm giant’s skin is based on Void Blue, and I used Imperial Purple for the cloth wrapped around his waist. I used the same blue to base coat the frost giant’s cloak, and the purple for the fire giant’s gauntlets and belt fringe and the frost giant’s undershirt. I then mixed up some brown (mixed because I didn’t like the color I initially picked) to paint the inner leather of the frost giant’s cloak, as well as the leather straps on the storm giant. I don’t remember what red I used for the fire giant’s beard. I used copper for the storm giant’s armor, and washed it all with Secret Weapons’ Armor Wash. 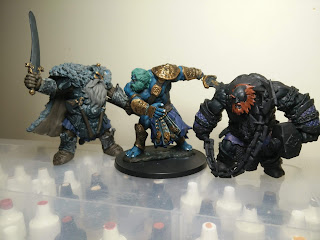 This was about 2 hours of effort.

On Tuesday I focused a lot of attention on the Fire Giant Jailer since he was so far behind as compared to the other giants. Originally I was thinking of painting him with red skin and an ashen beard, but decided to swap that around after looking at the art for fire giants from D&D. I used Coal Black, Stone Grey, and Linen White to paint the skin, and I also decided to try out using lots of little lines all over the muscles to indicate just how textured the muscle is under the skin. The eye patch was painted with copper and highlighted with Dragon Gold. The beard was brightened with Hearth Glow and Candle Yellow (?), and I used the same colors for the pimples on his back. The chain whip and other metal bits were painted with Scorched Metal. It isn’t quite as nice a color as GW’s old Tin Bitz, but it gets the job done. I then splashed clear coat all over it, because the under layer of Red Liner still wasn’t doing its job. 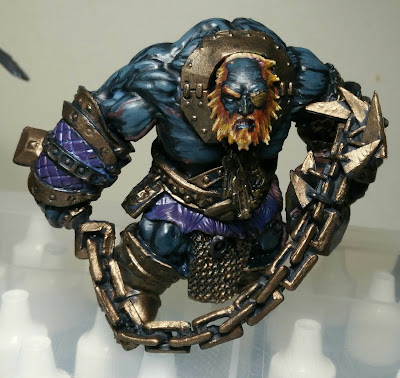 Maybe if I mix clear coat with the red liner? 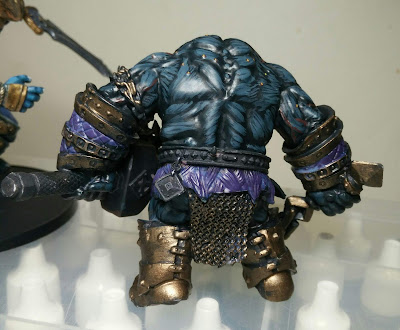 As the Storm Giant was mostly done, the only thing I worked on was cleaning up a little around the face, and painting the blade. I used Shadowed Steel and Honed Blade for it, and then used the same colors over on the Frost Giant. 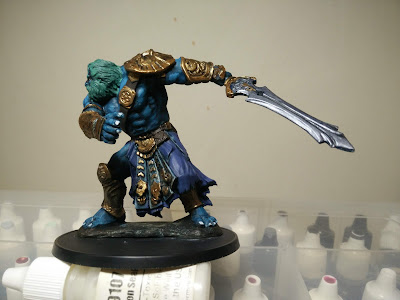 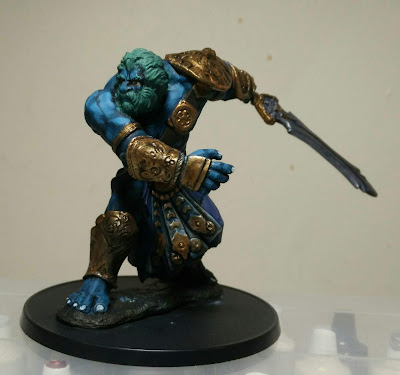 The frost giant king was a bit more work than I really wanted. Part of it is that the sculpt is a little soft. Details aren’t as crisp… Honestly it made me glad I didn’t bother getting any of them in the kickstarter. I decided to paint all the armor blue before painting the metallics over it. I used the same Shadowed Steel and Honed Blade for most of the armor, and the Copper and Gold for the trim. I also gave the beard a bit of a wash with the thinned down light purple I’d glazed the fabric with. I then stuck the horns in, and gave them a coat of Brown Liner. The helm decorative piece was lost at some point, and I’ll eventually stick something there to cover the hole. Probably will just fill it with some green stuff. 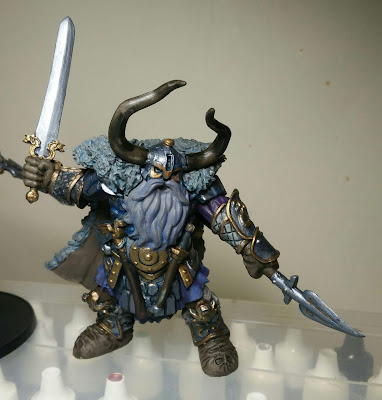 While none of them are *done* they’re table ready for game, and decent enough for 5 hours of total effort. Next time I’m gonna speed paint things like this, I really should try to pick things that are more alike than just “giants”.