A Monograph on the Infernal Lesser Prince Morax the Profane

A while back I created a demon infested manor for my players to clear out and use as their new base of operations. Wanting a little more than murder-hobo smash and grab, I decided to try to tempt them. What else from a demonic intelligence that really wants to be free to cause chaos in the mortal realm? And how best to tempt a wizard desperate to hit 9th level? With magical (demonic) power of course!

Sadly they sent the demon back to hell, and destroyed the Monograph.

Well, they destroyed one copy of The Monograph. Others are out there. Maybe there's one in your game?

A Monograph on the Infernal Lesser Prince Morax the Profane
Composed by The Grand Archmage Idreforn, Court Wizard of the High King Aerokos

This tome radiates a faint necromantic/infernal magical aura when examined. The red leather of the covers is well worn, but the brass clasps shine as if freshly polished. The title on the spine glows dimly. Within, the pages are written both in an ancient common and magical script, depending on the section.

The first half of the volume covers who and what Prince Morax is, and his various evil deeds across both the world and as a general in the great wars in hell. It also describes the occasions the demon has been summoned and bent to the will of various demonologists, and how each time he’s been cast back into hell by the destruction of the crystal skull used to bind him. There is an extensive section detailing the various powers Morax is known to have used.

The second half of the volume concerns the ritual used to summon the demon, and the means to create the crystal skull that will bind him to the will of whoever holds the skull.

The study of this book requires a magic-user or cleric to study it for at least a week before they can attempt to fully understand the magics within. During this week, 3 Int/Wis checks must be made.

Check 2 - The Ritual
Failed check - There is a flaw in the reader’s understanding. There is a 50/50 chance of the ritual simply failing or opening a portal to hell.
Passed check - the reader can successfully follow the instructions to summon Morax.
Passed +5 - As above, but the reader can also use the summoning circle to contain Morax.
Passed +10 - As above, and the reader knows that the summoning is a permanent effect (and how to reverse the ritual to send Morax back to hell)

Controlling Molar with the skull
Bending a demon prince (even a lesser one) to one's will is a difficult task. Morax has a willpower score of 28. Anyone using the skull must add their Intelligence & Wisdom scores, plus half their level (rounded down). If the score is less than 28, Morax takes control of them as if under the effect of a Charm Person spell (no save). A tie score allows Morax a save for every task assigned to him. Beating his score increases the duration between saves to 1 day for every point his power score is beaten by.

Part 1 can be found here.

I finally finished this monster of a mini. Not shown are the various layers of sand and gravel that were used to cover the edge of the base that wasn't covered by the included textured base. I then slathered a craft paint brown over most of it, and then used a variety of earthy browns from Reaper over it to give it some variation. The rocks were painted with greys, nothing fancy. The eggs I wanted to be a little more fancy, so I painted them with marine teal and ghostly moss, and gave each one a little dot of walnut brown. 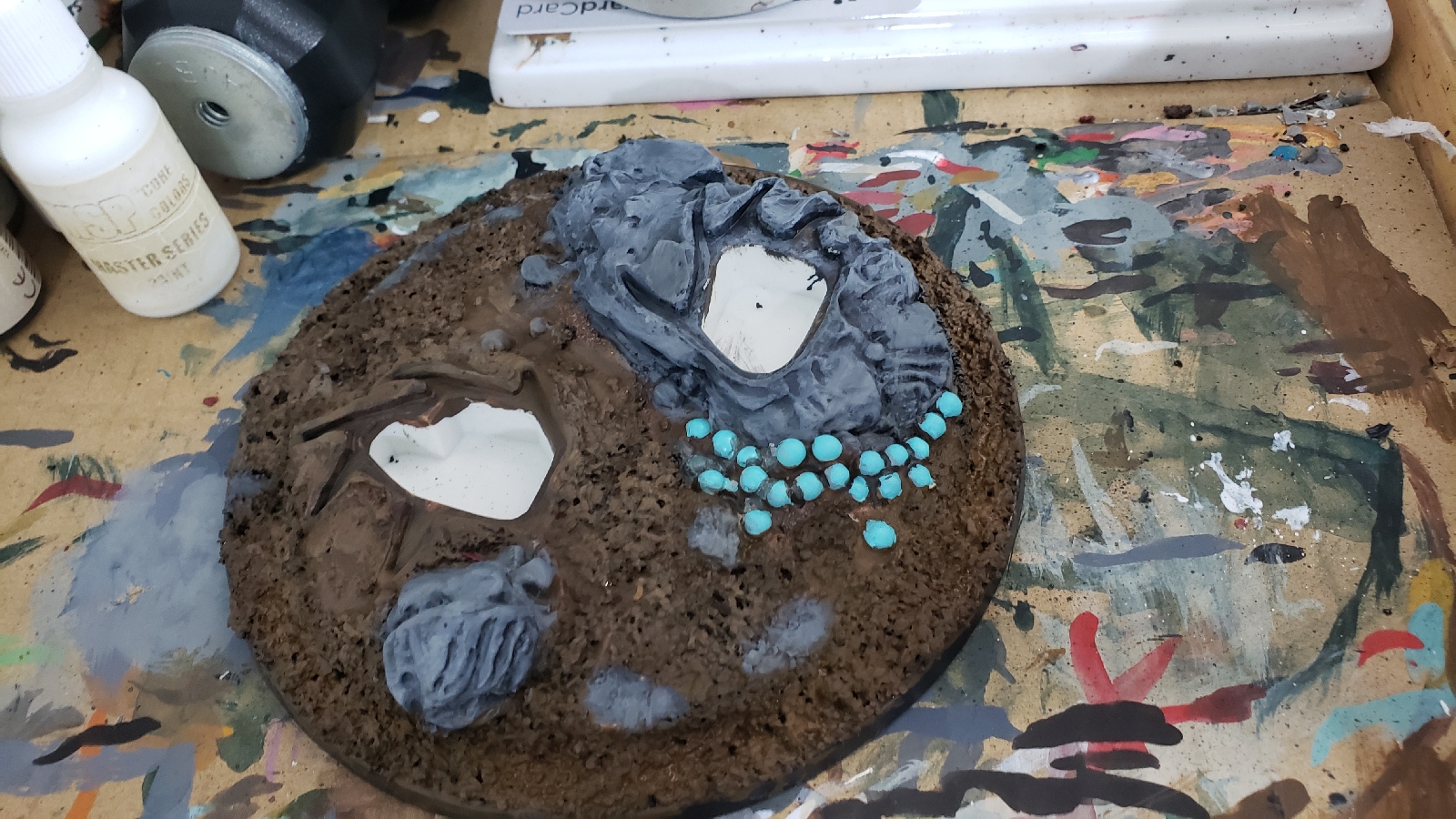 Then it was time to flock it. 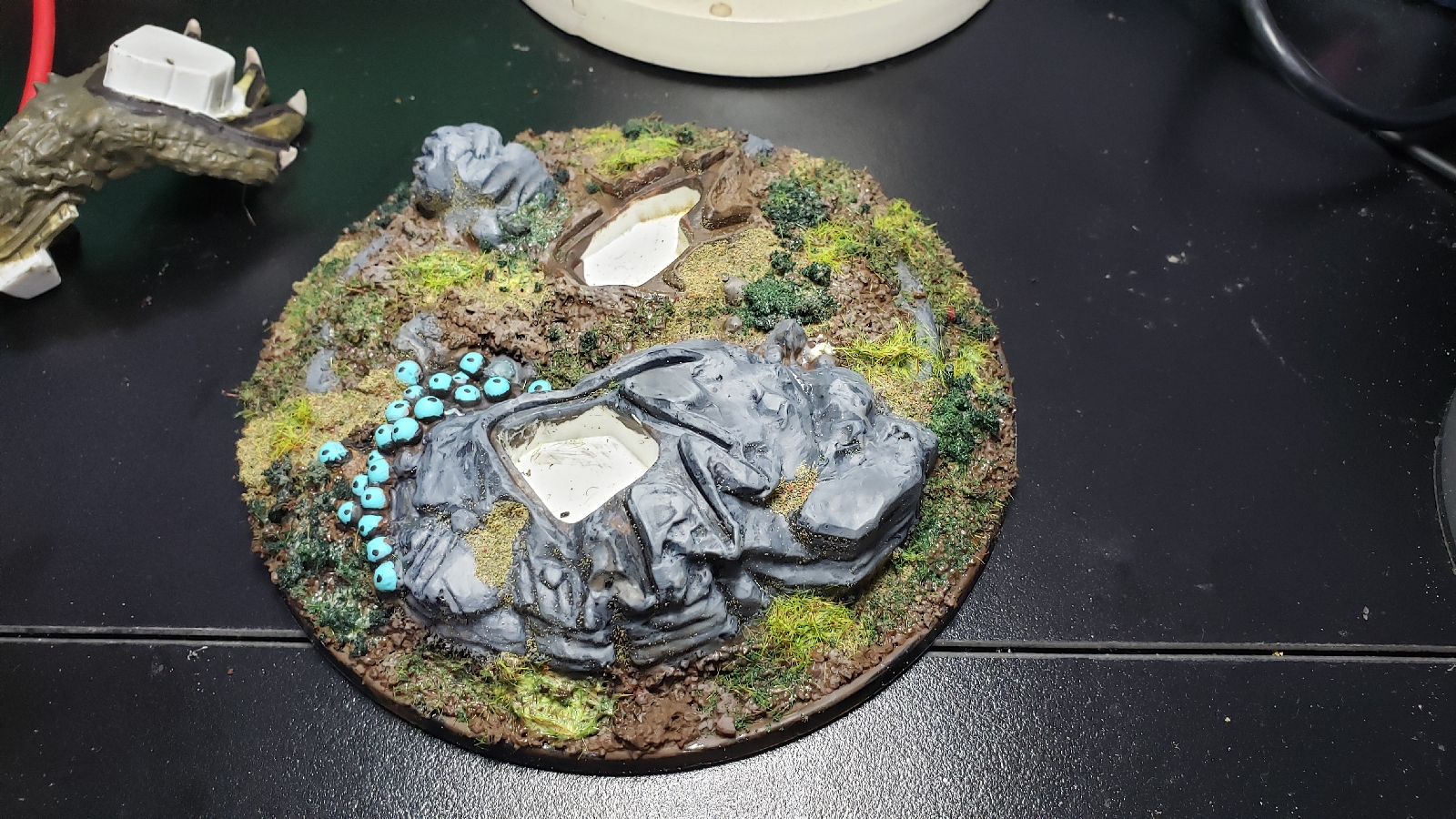 Using Secret Weapon's water effects I painted over the eggs to make them look freshly laid. And I dribbled some more around the eggs to pool in the low spots between them, and dribbling down toward the edge. 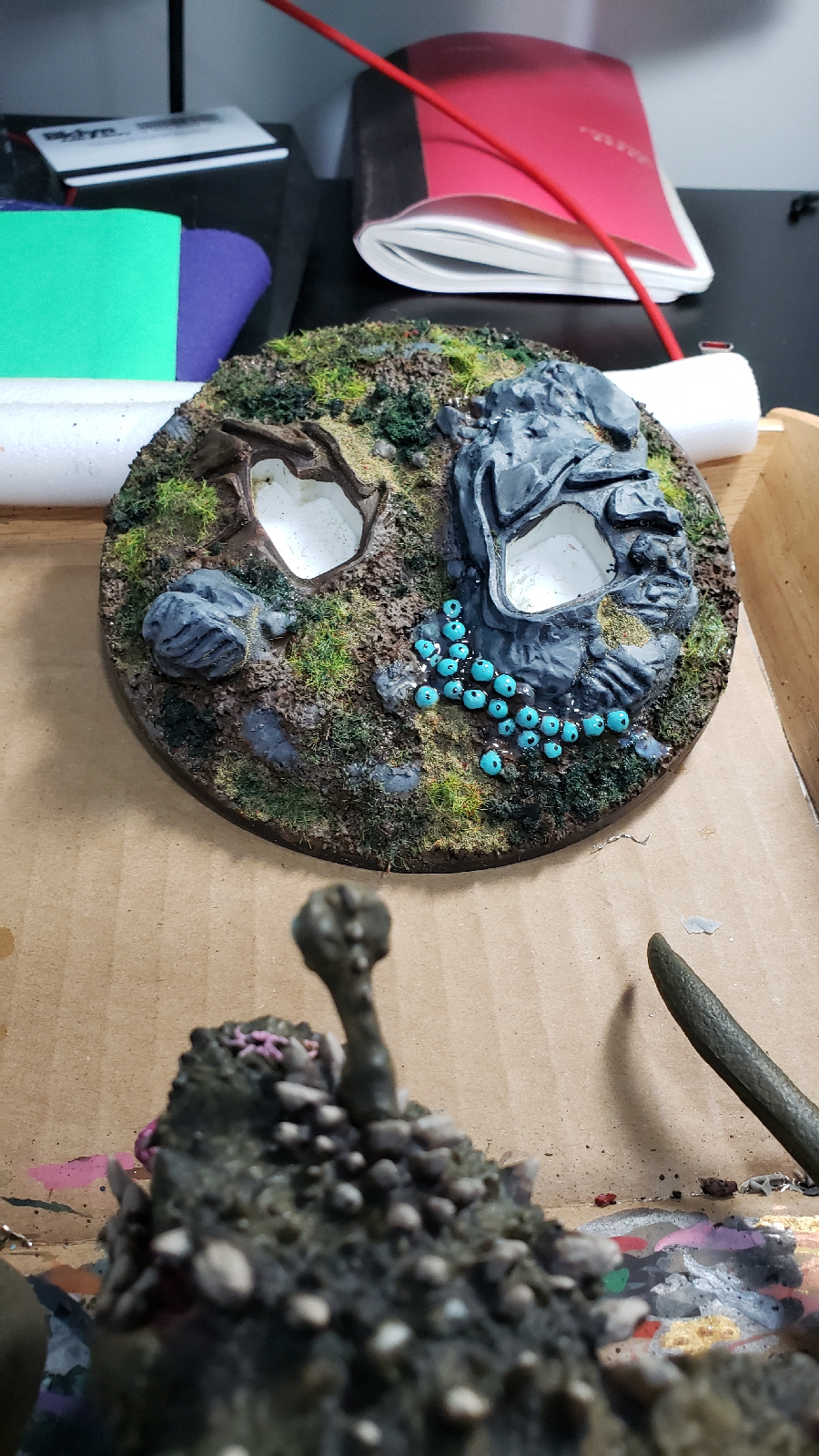 I think there are 5 or 6 different types of flock and static grass that I covered the base with. 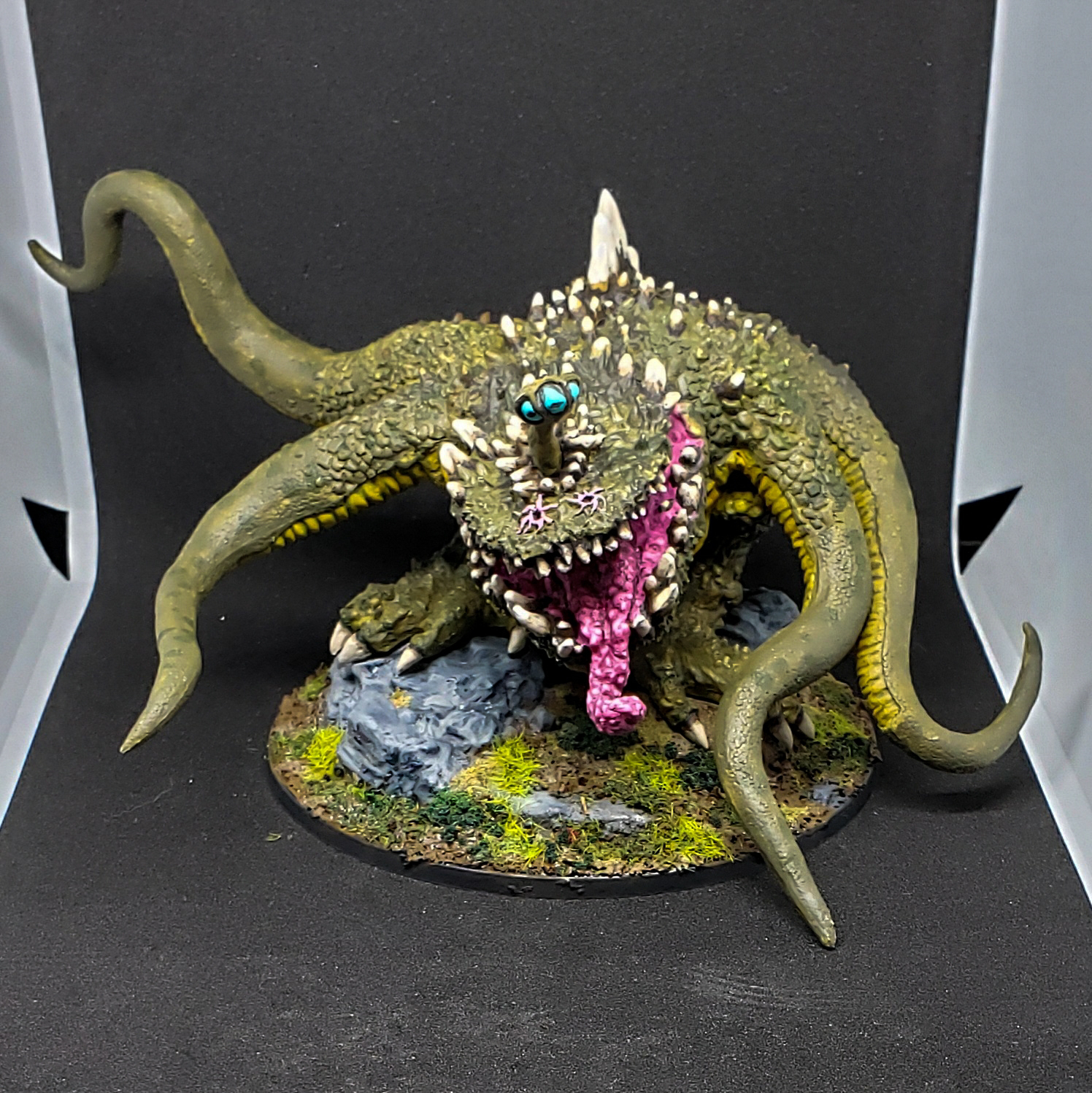 And here it is in all it's glory! Like most large minis this ended up being something of a slog, but I'm pleased with the results. 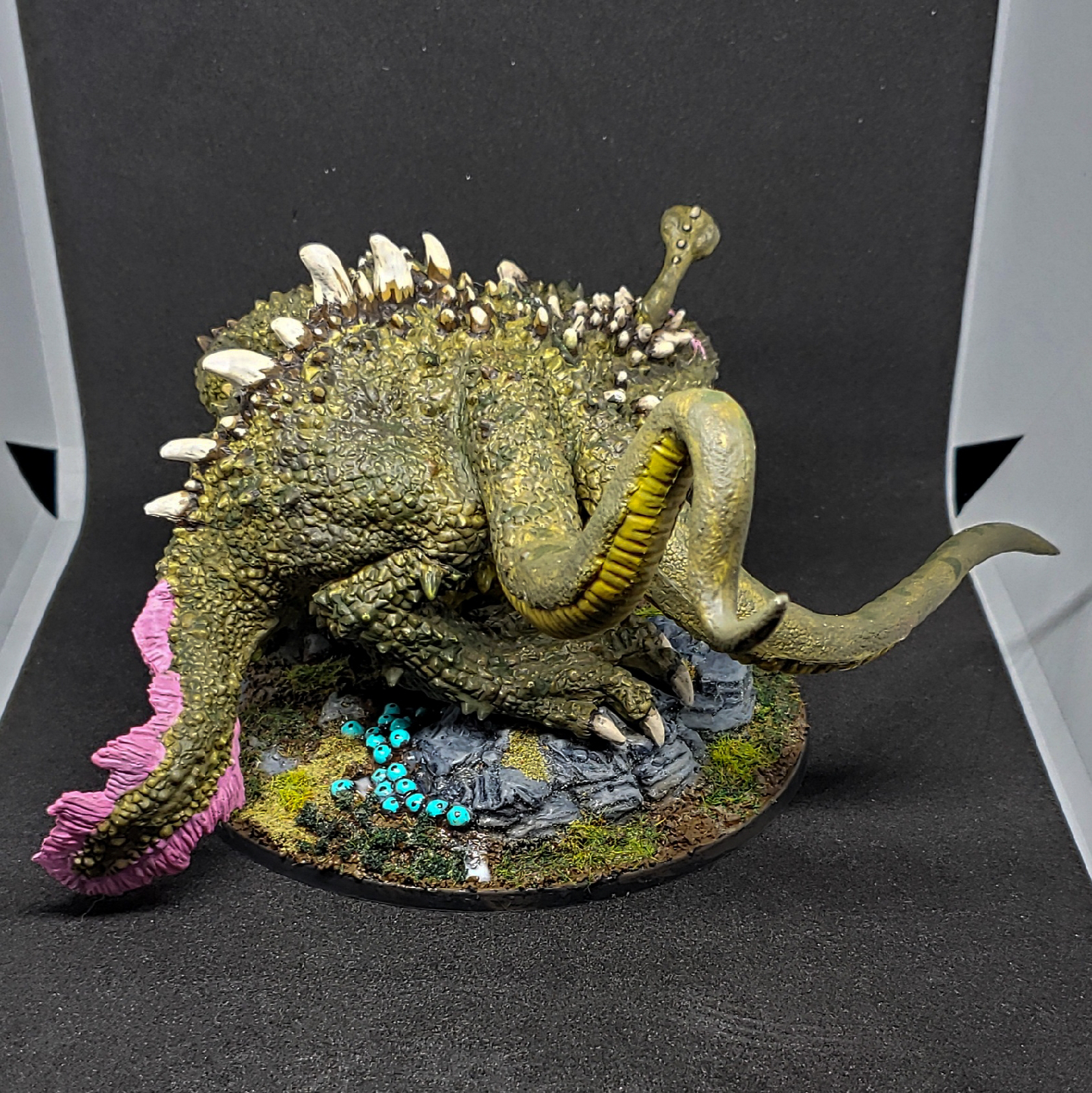 Now I just need to get my gamers together to drop this on the table and watch them fight it! Of course that also means getting some stats worked up...

I haven't marked the day in a couple of years, but yesterday was my 13th blogiversary.

It's interesting that this has kept on, even though at this point too many of my posts are the monthly wrap ups, and not nearly enough of them are session reports or new content. And I have ideas for new content stuff, and things from game that I want to share, but with a toddler in the house, finding the time has been hard. That's part of the reason this is a day late in fact.

I don't foresee any big changes to things here at the Tower anytime in the near term. Likely you will be seeing more of the same, though I do want to keep posting some of the new characters I've been coming up with. 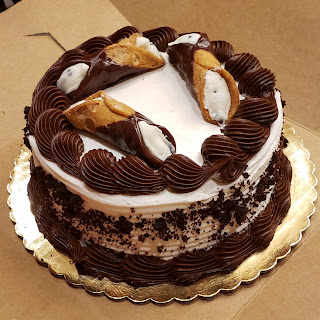 Anyway, happy blogiversary to me! Here's to another productive year!

This is truly a golden age for Star Trek. We have so many new shows to enjoy, great loving diverse casts who are all thrilled to be a part of it, and creators who clearly get what Star Trek is about.

Today, starting at 3pm eastern, 12 pacific, you can watch the day's events at https://www.startrek.com/day

One of my goals for the month was to play a game of Stargrave. Sadly that didn't happen. However I got a lot closer to it than I have in a long while. I got as far as finding the rulebook, getting some terrain ready, and picking out some minis. I even got the primed terrain on the table to see if I had what I needed for a game. I do. And then I went and bought some craft paints to paint the terrain (as I'm not going to use my expensive Reaper paints for a table's worth of terrain).


Gaming
As I wrote above, no Stargrave, but there has been some Stonehell and Rappan Athuk gaming! I really need to catch up on session reports, but finding time is just hard to do. Life with a toddler means that there's only an hour or two a day that's available for my various interests, and a lot of evenings there just isn't the energy for creative activities.

Miniatures
A decently productive month. My kobold horde continues to grow as I make my way through the many many kobolds I've gotten the last several Bones Kickstarters. I also painted another dragon, though this one was rather non-standard, a plant dragon. Honestly if it wasn't labeled "plant dragon" I'd probably just call it a plant monster. 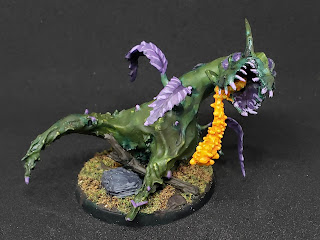 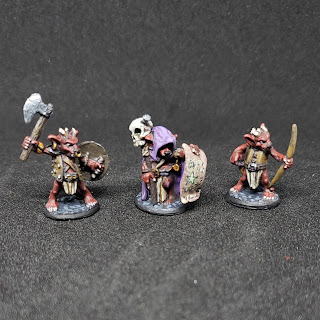 How do I manage to get as much painting done when I just said a bit ago there isn't time/energy for creative activities? I take half my lunch break and paint. Not every day, but even 3 times a week can add up.