5e: Within sight of the Eye of the Alfather!

Having set the Bright Banner Brandished party to rest, and breaking the curse on their families, we were again back in Mirabar, though not for long. We collected our supplies, did a bit of shopping, and then went to see if there was any giant news. We found a decent ale house (The Yeti’s Teat), and after returning some of the treasure we’d acquired to the local economy, learned that some fire giants were near, looking for something, and a solitary frost giant was in the area.

There was… an incident. Sadly witnessed by several bards… involving Thorin. It may be worth revisiting the arranged marriage tradition in his case. He is a fighter, not a lover.

We set off the first thing in the morning.

The chill has gotten worse, and while it’s only harvest time at home, here it feels like deep winter. Heading in the direction the frost giant was last seen travelling, we soon found his trail, and then the giant himself. Wearing the dragon skull helm we’d been told of confirmed that this was Harshnag! We landed, and introduced ourselves, then called Holla Hilda. She confirmed who we are, and then Harshnag told us he was on his way to the Eye of the Alfather. He also told us the fire giants were trying to assemble a rod that will help them collect various obsidian artifacts in an attempt to take over the giant hierarchy.

Flying over Harshnag, we traveled up into the mountains until we reached the mouth of a shallow ravine… The air had thinned and chilled even more, so we landed and walked, giving our mounts a rest. Not too far into the ravine we were set upon by some wild cats. Only notable for the fact that Joda, normally so sure footed and dexterous slipped on some ice and landed very hard on her ass, and cracked her head. 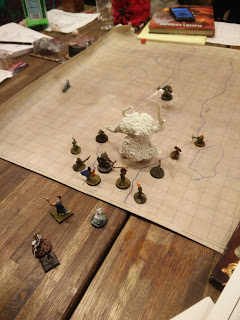 About an hour or so later, when the ravine had become a canyon, the walls having climbed to over 30’, we were ambushed by some incredibly sneaky ice goblins and a pair of sand gargoyles. Blinding Joda in their initial assault, we laid into them. Unlike the fight with the cats, Harshnag got into the swing of things. His great height and reach were helpful. I was cold and tired by this point, so I flew up and lightning bolted as many of them as I could. The dying gargoyle creepily croaked out “I’ll be seeing you soon!”

A short march later we’d arrived at the pillared entrance of the Eye of the Alfather!