In my weekly Stonehell/Rappan Athuk game, there are a number of leveled NPCs that regularly join in on our adventures... but not always. Given that each of these NPCs is an independent character, and not a paid hireling, I wanted there to be situations where they wouldn't be available, for whatever reason. To keep it simple, I decided a simple morale check would work, with anything 5 or under would mean that NPC wouldn't be available this week.

Thinking about it more, I wanted to add a little something to the check.

Charisma modifiers were a good place to start, especially as my character Nick has a penalty. It just made sense.

But then I thought about other things that would impact whether someone would want to brave the dangerous dungeons with these particular murderhobos. This is what I've come up with.

Make a morale check. A modified 5 or under means the NPC is unavailable to adventure. Under a 2 means it is very unlikely they will ever rejoin the party, and may organize a rival group)
-1 Reduced to 0hp last adventure
-1 Someone died
-1 Unsuccessful delve (no magic items recovered, not enough treasure to cover expenses
+1 Successful adventure (a magic item was recovered, profit was earned, quest complete)
+1 Leveled Up (NPC gained enough XP to level up)
+3 Very successful adventure (NPC got a magic item)
+/- Charisma Mod of group leader (not necessarily the highest level or most charismatic)
+X Bribe (varies by what's offered)

She's cute, bubbly, smart, but critical (of others) to a fault, and can be vicious when things go against her. One of 9 siblings, she spent much of her time away from the family farm, exploring the woods near her village. There she met a hedge witch. Initially the witch wanted nothing to do with the girl, trying to avoid the villager's attention. Juliana was persistent, and eventually the witch began to teach her. First by sending her to collect various herbs, plants, and other things that could be found in the woods. Later she began to teach her magic. Not the fancy flashy magic of the wizards in their towers, but earthy magic.

One day the witch and Juliana were both in foul moods, and getting on each other's nerves. They fought, yelled, screamed, and in the end Juliana stormed from the woods, and told her family about the 'evil witch in the woods who tried to charm her' and then the story spread. The witch was hounded out of her cabin, fleeing in the night before the mob came and burned it down... but not before Juliana had snuck in and taken a few useful trinkets.

Now Juliana lives on her own at the edge of the village making herbal cures and strong flavorful brews. A pair of hedgehogs are her only companions. Whispers in the village are beginning to spread that maybe Juliana didn't resist the witch at all, and she's putting something in her brews... and those hedgehogs? Probably demons. 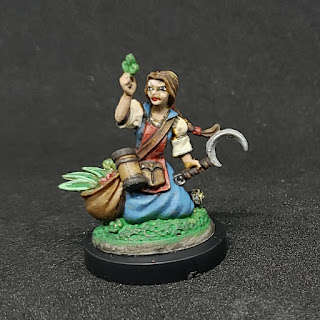 Curdom the Unstoppable
Maimed as a teenager by a werewolf, this young cleric doesn't let his limp slow his hunt for the best that ravaged the monastery of the silvery moon he grew up in. As a youngster he was more interested in the ritual of the temple rather than the hard work it took to maintain it, but after he was nursed back to health, he threw himself into training to fight the monsters that hunt the world. Never the best in skill or technique, Curdom will pick himself up and keep fighting by sheer force of will.

In addition to the usual fighting equipment, he always carries a couple vials of silver infused holy water that act like acid on lycantropes, and prefers payment in silver.

His one goal in life is to eradicate the scourge of lycanthropy, be it through healing magics or the silvery head of his mace. 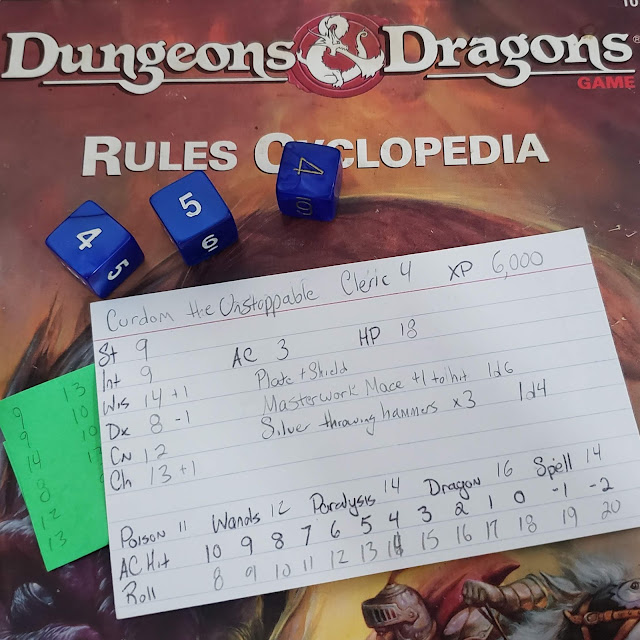 COVID Sucks! Even more than poison ivy, though it was close. It was a “mild” case that mostly resolved after a little more than a week (faster than the poison ivy) but still miserable. The only positive thing about it was being able to binge watch some TV. Actually that was about the only thing I was able to do, period. I spent most of the time in bed asleep.

Not how I wanted to be spending my PTO. I had PLANS, and now I need to update those plans.

Gaming
Only got a couple of session of D&D in this month, but Nick and company continue to deal with the frog cultists, and helping them clear out their haunted cloister. Unfortunately it was (is?) haunted by invisible stalkers, one of which chucked my character off the cloister wall.

Miniatures
In spite of yet another month of ill health, I still managed to get a bit done. The one I'm happiest with is the Viceroy Scrutator. I've never been great at white, but I think I pulled it off. 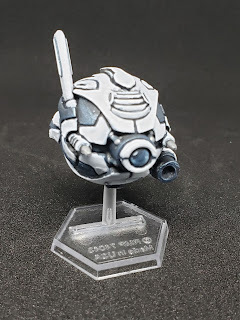 Goals
I now have an actual table that I can game on. My goal is to pull out some terrain (even unpainted) and play one of the solo scenarios for Stargrave. I also want to finish off the froghemoth. It's nearly done, and I just need to wrap it up.