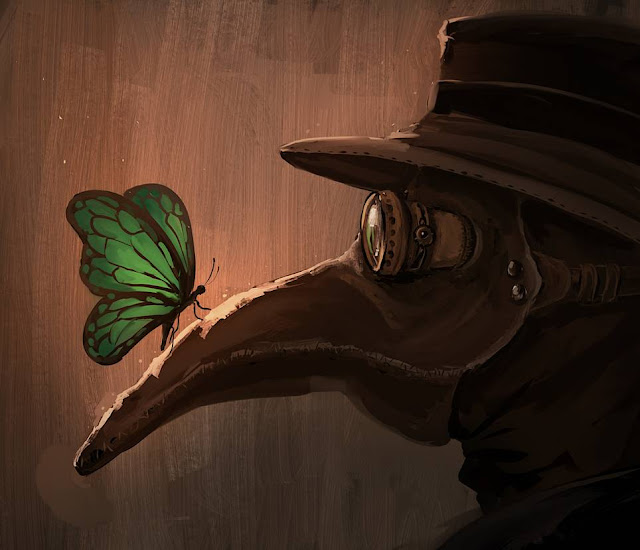 Since we're all stuck inside, Osprey and Joseph McCullough have decided to release the core rules and 2 supplements for free. 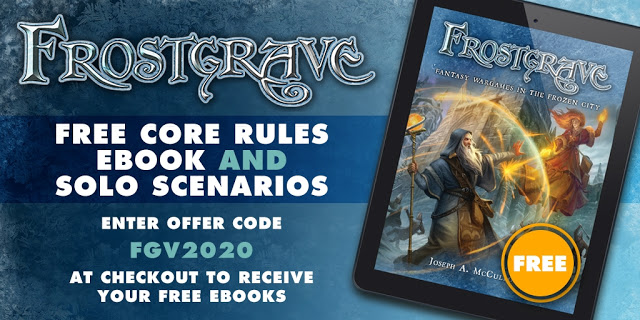 Email ThisBlogThis!Share to TwitterShare to FacebookShare to Pinterest
Labels: frostgrave

Technically only one of these is a witch... but they all seemed to sort of fit together, and I wanted something to work on that was... kinda witchy. Oathsworn's human witch, firbog druid, and tiefling mage. 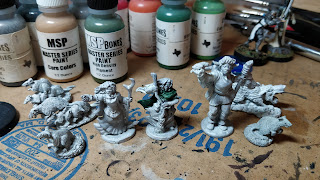 After a good scrub, I primed them with Reaper's Brush On Primer. 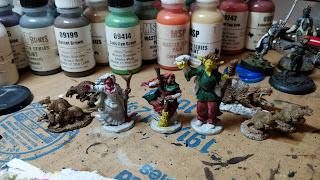 I'm aiming for an autumnal color scheme. I don't actually know what color firbogs are supposed to be, but I thought she'd look good in yellow. 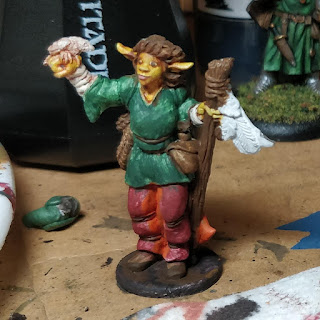 The witch had to be a redhead, and the tiefling just had to be red skinned. Kinda getting a Winifred Sanderson vibe from her. I haven't decided what color her top is going to be, but I'm liking the skirt in orange. Maybe purple? 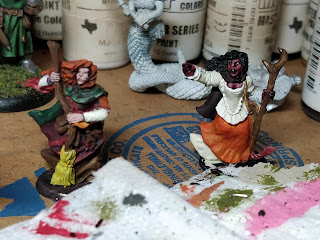 Stonehell: Insanity in the Asylum

After taking on some new hirlings and a Cleric of the God of Patience, the party did some shopping, and then headed out to the dungeon. Taking the main entrance, they circle around and down to the asylum, and carefully back to where Demitri fell. His body was still there, what was left if it. The only thing holding the paste that was Demitri together was the armor, which survived mostly intact, with only a few needles embedded in it. They bagged the goo and the armor to return it to the city.

Moving deeper into the asylum, they came to a wide hall with murals that moved… a large crowd of people of all races, many of them fantastical. This seemed to warp the minds of about half the party who either attacked the walls or their fellows. The rest of the party dragged the insane ones away from the walls, and back to where the jam of demitri stained the floor. Then the zombies arrived, and were quickly put down.

Deciding that this was enough, they headed back to town, giving Demitri a proper burial (and sending the armor for a cleaning) 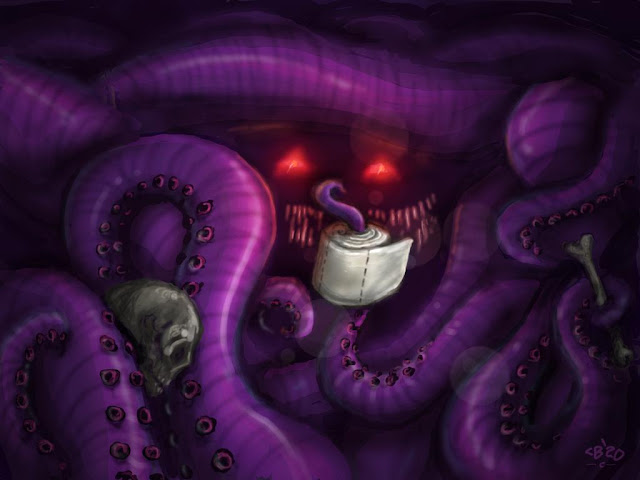 On the way to Stonehell, the party encounters a merchant caravan looking nervously about, and hurrying to the City. They offer to accompany it, and they successfully do, earning 6gp each. Over paid for the work, but the party looked more impressive than they actually are.

Back toward the dungeon, the party decides to check out some of the caves, but as they’re deciding what caves to check out, the shadow of a dragon flying overhead passes over them. They run for the nearest cave, and hope that they weren’t spotted. Looking around the chamber they find themselves in, a soft glow flickers ahead. Moving deeper into the darkness they see a message written in glowing chalk

R- As agreed, the jewels await you two levels down in the chamber past the acolytes’ cells. How you deal with the wasps is your own concern! -M


Then things get even darker as the dragon lands and blocks the sun. It taunts them, and tells them to come out and play. The party opts NOT to go out and play, and heads deeper into the chambers. The dragon follows, talking all the while… the party reaches a room with no other obvious exit. They flank the doorway as the dragon approaches… the dragon is still talking… only.. Not talking.

Daton, Halghild, Carmyr fall unconscious to the floor. The dragon chuckles at the sound of the dropping bodies, and moves forward, sticking his head through the doorway. Elwin and Demitri bring their weapons down on the dragon’s snout. It screams in pain, then tries to cast another spell, but Demitri passes his save. The dragon pulls back out of the doorway, and can be heard shuffling backward down the hall.

Exiting the side cave, they creep out of the shadow of the box canyon, their eyes scanning the cliff sides and the sky, but the dragon is nowhere to be seen. They hurry to the dungeon entrance, and Dimetri and Elwin add their names to the many already scribed onto the wall.

Heading through the antechamber, they make their way down around toward the stairs. Carmyr triggers a pit trap, breaking his neck in the process. The party pulls the body from the trap, but continue on their way. Down in the Asylum the stick figures going about their business all stop and look at the party as they pass. The skeleton in the hallways waves as they pass… Things seem different from the stories the party has heard of this area of the dungeon.

Then they hear a metallic buzz. Into their torchlight a humanoid figure… floats? As it comes more fully into their sight, it looks fuzzy, blurry, out of focus. Dimetri tries to turn it, and it doesn’t react. Elwin and Halghild flee in terror. Daton backs up. “Help me” it buzzes.

“How” Dimetri asks, before it surges forward, engulfing the poor cleric. Daton watches in horror as the cloud of needles that makes up this horrible monster liquifies his friend, and then Daton runs after Elwin, catching up with them at the top of the stairs. They decide to get Carmyr’s body and get out, and decide to come back for Dimetri later. 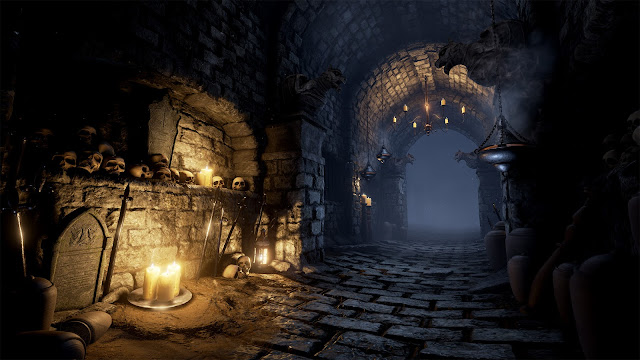 Wash Your Hands, Save Your Spell Slots! 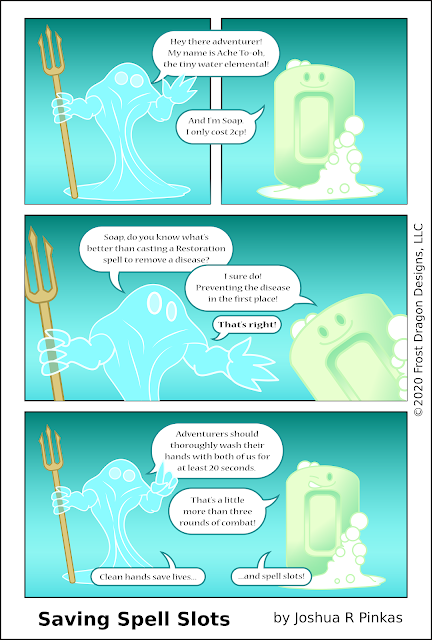 Sadly we don't live in a world with access to "cure disease" spells.

While putzing about town, and debating returning to the smoking dungeon, word spreads that Kallo and Drolo recruited their own hirelings and returned to the dungeon, recovering the bandit’s hidden treasure.

Brother Dimetri, before heading off with the rest of the party, heads to the market and hires on Thurg the dwarf at arms, Maxx the Man at Arms, Grubb the linkman, and Marduke the fighter. Most everyone gets some extra equipment, and then the party heads into the dungeon via the Hobgoblin caves. Circling around, they make their way down into the hothouse.

Taking a westward passage, they encounter a hall full of webs, and giant spiders… but not just any giant spiders, spellcasting spiders! Grubb and Dimetri collapse asleep as the first spider emerges, a second spider tries to charm Borumar, but the half orc resists, and then magic missiles shoot out from a third spider.

Thus begins a running battle that goes back and forth and lasts almost the entire session. After slaying the spiders, and looting their weird nests, the party, badly wounded, makes it back to town.

Gains: 3 potions, a ring, and some gold
Kills: spellspiders
Losses: NONE!

I said I’d be better about posting this month, and I was. A little. Better than January, anyway. CPA studying continues. The FAR exam might just be the death of me. 6 more weeks till the test. I expect there to be a flurry of posts after mid April. Till then, it’s gonna continue to be the slow drip…

Of course with such intense studying, my brain is doing its usual thing and trying to distract me with various hobby related things. Specifically it seems to be focused on building terrain. I really want to build some ruined jungle temple terrain for Frostgrave, and some industrial terrain… I don’t actually have a game in mind for that, I just wanna. I might be able to redirect that particular urge into scratch building some spaceship models, but...

Gaming
Stonehell has been delightfully deadly of late. I’ve restocked the upper levels for my lower level players. I’m making it a little more fae, a bit more twisted. And I’ve installed an NPC mage into the old wizard’s school. I’ve also sprinkled some more treasure around. The injured dragon is all healed up (have I gotten that far in the writeups yet?)

Miniatures
Barely any work on minis this month, which is slightly more work than I did last month. I did manage to finish off a character mini for the green knight half orc paladin in the Curse of Strahd game I dropped out of. Still need to give it to the player. I also painted up this little familiar.

I’ve got a few things prepped on my tray, and I’m going to give my brain a few breaks here and there over the next few weeks, so, who knows, I might actually get something done. Question is, should I do something easy like a bunch of goblins, or focus on some character minis? How about some rats? 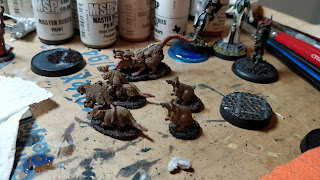