Didn't share a pic of my pumpkin last month. Should have added a horn on the top of the head that connected to the top of the circle. An additional point of contact would have helped keep it from falling into itself. As it is, the apartment is far too warm, and it started to mold after only a couple of days. 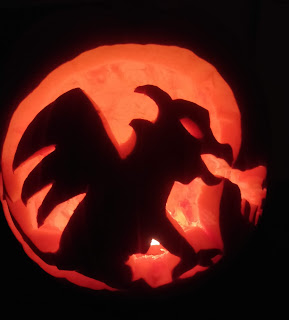 Thanksgiving was quiet. Just the 4 of us. We lost Lucymonster the Monday before. Her brain tumor finally caught up with her, and it was time.

All gaming is on pause. With the arrival of my son, there just isn’t the time or energy. The closest thing to gaming I’ve got going on was reading the DCC/MCC supplement Enchiridion of the Computarchs which covered bringing in computer technology, AIs, and Robots into your games. I was actually a little disappointed in it in the end. I wanted more dealing with using AIs as patrons/villains, but ended up with more spells/programs for Technocaster PCs and NPCs to use.

So I finished up the wraiths and hags that I’d planned on, though the bases for the hags still need some work. I also did some basing work on the temple dragon I started several months ago, and then moved onto my new project, Bones Goblins.

No, I didn’t need more goblins, but I wanted something easy to work on. Already though I’m annoyed with myself for not starting them with a liner coat before starting the painting. They’re nearly done, but… I’m not happy with how the paint applies to the bare bones material. Yes, I know they’re supposed to be ready to paint out of the package, and that’s true, but not necessarily true for me and my painting style. 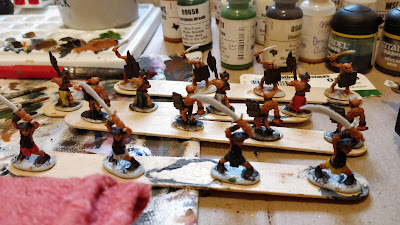 The other mini I started working on is Reaper's Father Christmas.

After I finish these guys up, I'm debating what to work n next. I'm thinking maybe something Sci-Fi to go with Stargrave that's due out in April. Maybe some objective markers? We'll see.

Media
Movies/TV Watched - What with being up to feed the child at all hours, I'm getting a lot more screen time in, as it's one of the very few things I can do while holding and feeding him.
Star Trek Discovery, season 3
Star Trek DS9, season 2-3
Star Wars Clone Wars seasons 3-5
White Christmas
Jingle Jangle
Dolly Parton’s Christmas in the Square
Christmas Chronicles
Christmas Chronicles 2
Let it snow

What with watching a ton of Star Trek and Star Wars I'm in a sci-fi mood!

"Death would not be an end, merely a transition for the sorceress now known as the Porcelain Lich, though it's said she prefers 'La Belle Mort' now, and woe to any who would use the more common nickname."

Rathgar frowned at the sage, then turned to Feris. "Do we really have to deal with this... lich?"

"If you want to get Nimble's curse removed, yes. I can't do it myself."

The large rabbit sitting in Feris' lap made a short loud scream.

"Fine." Rathgar snapped, and pointed at the rabbit "but the next time you feel like stealing from the High Prelate you can deal with the consequences yourself."

"Ah, I see." The sage nodded. "I would recommend bringing a gift at least as valuable as the service you're hoping to get from her. A rare spell or a particularly beautiful magical artifact."

While the sorceress 'died' in her transformation, she is neither undead nor a construct, though there are similarities to both. She is immune to non-magical weapons, sleep, charm, and hold spells, and takes half damage from any fire or cold based attack. Unlike a true lich, she has no phylactery.

The touch of the Porcelain Lich drains heat from those touched, and anyone who is touched must make a saving throw vs spells or be slowed (as per the spell) until they're able to take a full night's rest. However she much prefers to remain out of melee and will utilize her spells, scrolls, and other magical items efficiently and tactically, always targeting other spell casters first, leaving her minions to deal with those more combat oriented.

While she is a scheming monster, she isn't needlessly cruel, and mostly seeks to acquire power and magical might. She rarely leaves her Palacio del Finartistico, but frequently hosts great musicians and artists to are commissioned to create great works for her (and often of her). 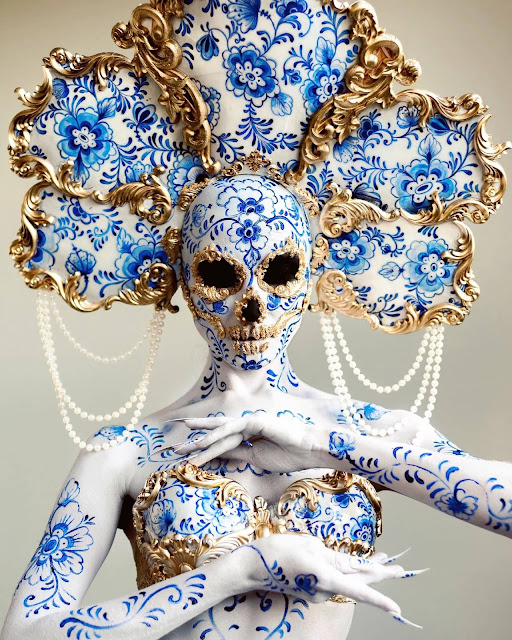 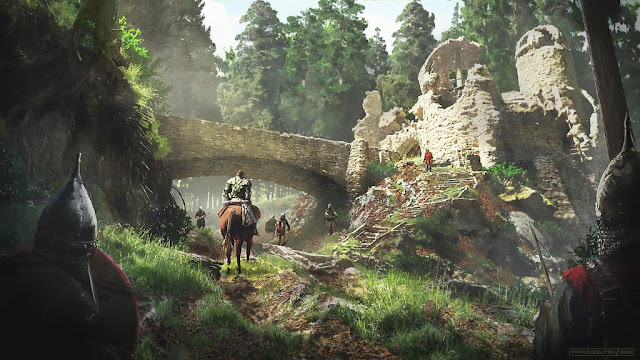 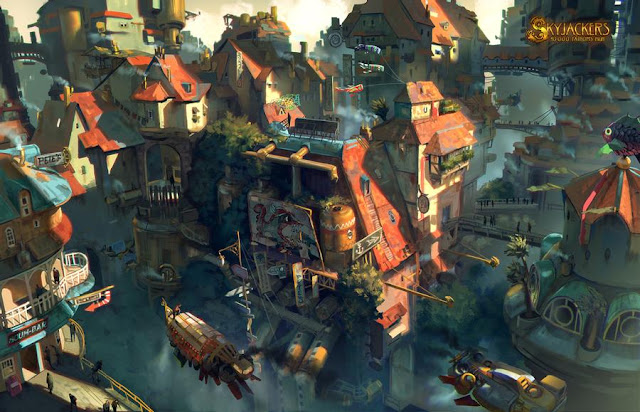 Last year at Reapercon, one of the swag items was a new resin sculpt of Murkillor the Wraith King. 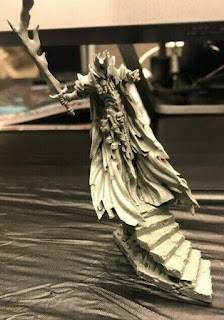 A Bones version will be coming along, but for now, I had this guy... and wanted to do him justice. But before I jumped in on this fancy mini, I wanted to test out my paint scheme, and what better way to do that than on Murkilor the Wraith King! 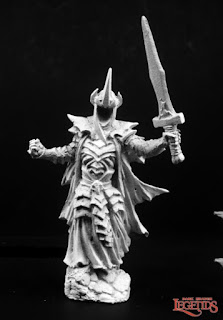 This is one of four of the older sculpts of Murkillor that Reaper has done, and the biggest of them all, until the new version above. But he's the closest to the new sculpt that I figured he'd do as a test subject. 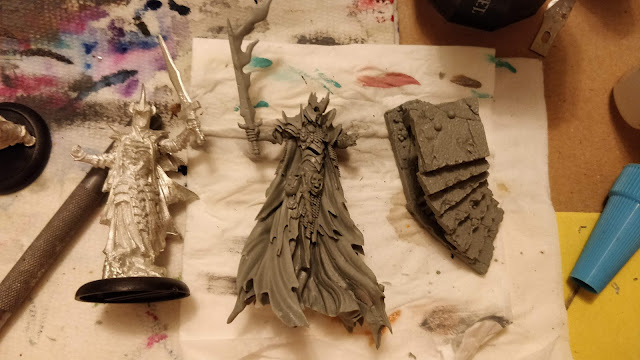 Side by side comparison... where I realized that the old one was a lefty! You don't get too many left handed minis. But I also... kinda hated the old sword. Well, I can fix that... 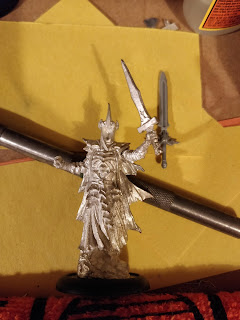 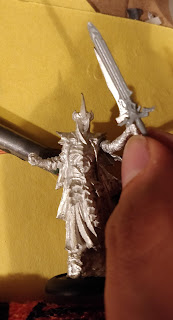 Digging through my bits box I found this sword from the Bones 3 armory set. A quick cut and pin with a bit of floral wire and it was good to go. I then primed him black and got painting. 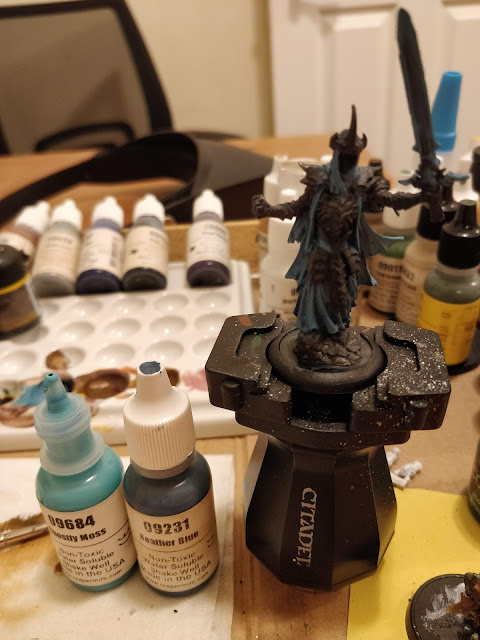 The effect I was going for was to make the robes look ghostly, while making the armor look more substantial. I began with Heather Blue, and built it up with Ghostly Moss. 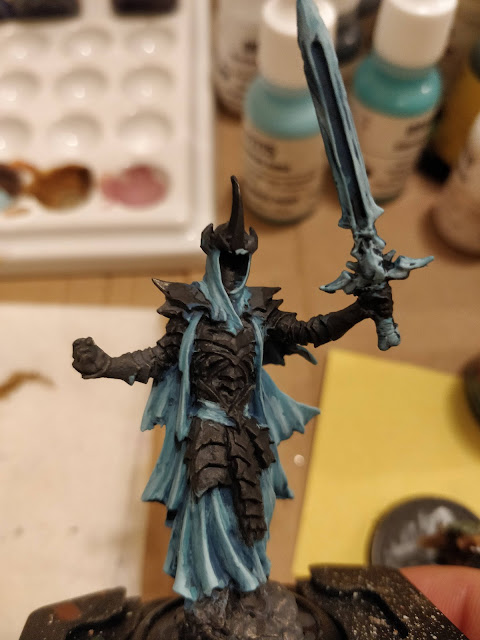 I used Pure White to continue the highlights, until I was spot highlighting with just Pure White. 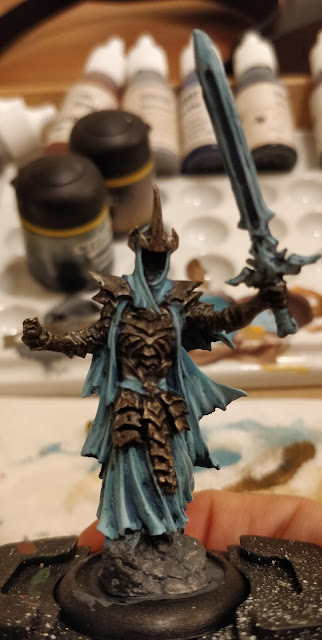 For the armor and crown, I started with Stynylrez metal primer, and then used Dragon Bronze 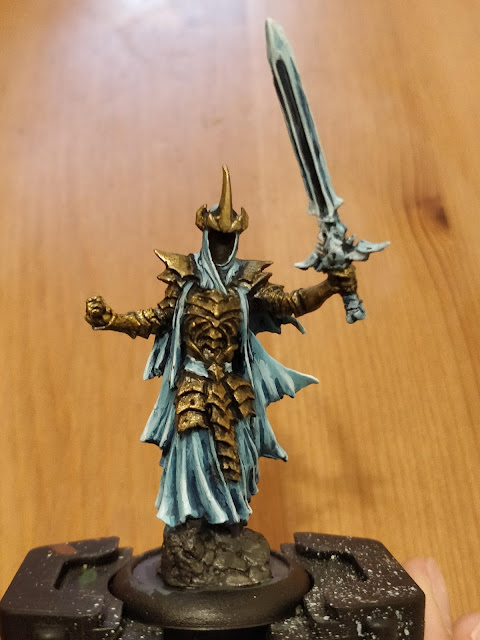 For the final highlights on the armor I mixed in a tiny bit of Mithral Silver with the Dragon Bronze.

I did realize, while working on the armor, that I needed to deepen my shadows, so I used Nightmare Black, a nice blue-black color, to do that. 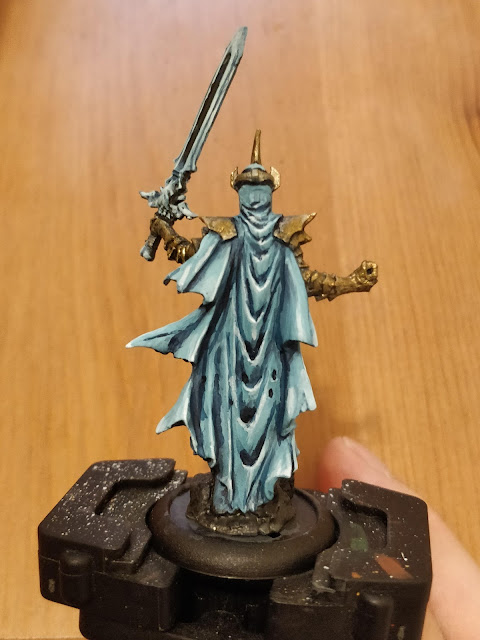 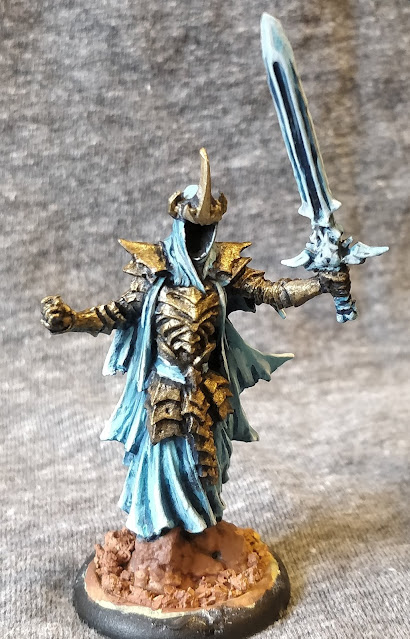 I filled in the base with a sand gravel mix, and painted it with Redstone, giving it a black wash, then highlighting with a tan (not shown here) 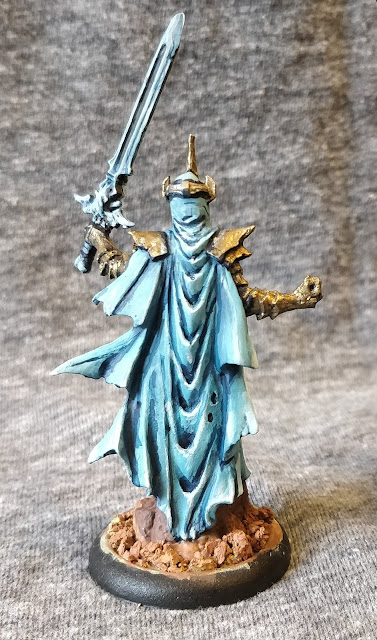 While not as smooth and buttery as could be done with an airbrush, or a little more effort on my part, I'm very happy with this guy... so much so that I went and ordered the Bones Wraiths in translucent plastic to go with him... but that's another post.

Having pulled off the ghostly look, I was ready to move on to the big guy...

It has been a month... and what a month. First, the bad news. I scored a 73 on the CPA exam, which means I failed. It wasn't the news I wanted to get, and because of the next bit of news, I'm not sure that I'll actively be pursuing the CPA for the time being. That unfortunately means I'll need to retake the Auditing section when I get back to it.

Now, why would I pause working on my CPA? Because my newest miniature arrived, and it's taking up all my time. 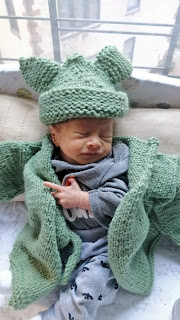 Welcome to the Tower little one!

With the arrival of the baby, Stonehell has been put on hold. And I haven't had the time/brain power to do any more writeups. I'm hoping that I'll be able to get some more of those done soon. Not sure when I'll next game.

I actually got some painting in. I decided to work on Reaper's Murkillor the Wraith King. I have 2 versions of him, the newer resin mini from ReaperCon last year, and an older version in metal. I started with the smaller older one, just to see if I could get the color scheme the way I wanted it. Then I moved onto the resin one. As those were coming along, I then added in the wraiths from Bones 4... 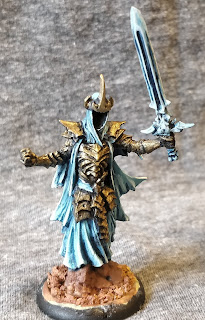 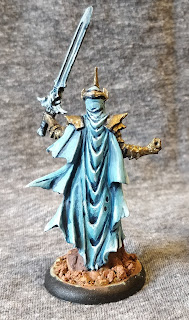 I also worked on a pair of hags from Malifaux, and a small 40K servitor figure from the 90's.

Finish the wraiths and hags.
Survive the Pandemic
Write a month's worth of session reports
Decide what I'm going to paint next