There are times not to judge a book by it's cover.

THIS IS NOT ONE OF THOSE TIMES!

Doug Kovacs' cover gives you exactly what you're going to get in the adventure! Emerald Monsters, and Emerald Enchanter, and prisoners to rescue. And as exciting as that description is, it isn't even the half of it. 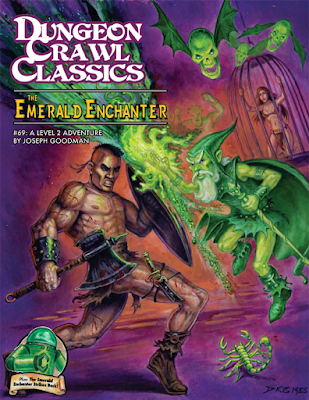 This has to be one of my favorite adventures that I haven't run. Joseph Goodman really rolled a critical when he made his skill check for this adventure. In addition to the above mentioned items, there are a host of traps and tricks and other monsters for the players to encounter. My personal favorite has to be the tile golem, whose mechanics are delightfully inventive.

Then there's the consultitorium, where the spirits of 3 ancient wizards can be talked to and secrets revealed...

And then the Moon-Devil... beautifully illustrated by Peter Mullen. Any DM that doesn't share that image with their players is cheating them.

Honestly, by the time the players make it to the Emerald Enchanter himself, you'd think that all the fun tricks would have been used up, but you'd be wrong. It isn't just a final battle to the death, but one where the timing is critical if they want to save the prisoners!

And just when you thought it was all taken care of, Jobe Bittman brings you The Emerald Enchanter Strikes Back!

This follow up adventure is completely different in style from The Emerald Enchanter, as it isn't a dungeon (castle) based adventure, but one that spans a large hex map where the players have to chase down a massive golem, and get inside of it, and stop the Emerald Enchanter's path of destruction!