The statue’s throat hole went beyond just the worms’ nest, and opened up into another set of passages. This was the extent of Thorin’s contribution this update. After we all slowly made our way up the statue, and cleaned off the worm guts, charcoal, and other less savory substances, we followed the passage into a massive antechamber. The far doorway was framed by a carving of a giant battling a dragon. Journey noted it magical glow, and supposing it was trapped, I dispelled magic on it. The glow faded, and we opened the door safely. Beyond was a short hallway followed by an even more massive chamber. Hanging in the hallway were three leathey cloaks.

I’m not sure who said it, but someone said “Oohhh!” behind me just as I let loose a blast of icy cold at the nearest one. “What are you do-OH!” was what I heard as the cloak revealed itself to be a cloaker. They proved to be remarkably tough opponents in person, more so than my studies hinted at. At one point Bran, Rin, and Hilde were all wrapped in their embrace! Thankfully our ability to stun them made them easy to pull off, toss into the middle of a circle of us, and pound them dead.

In the chamber beyond we discovered a flow of slime flowing from the door to the west toward the door we were entering from. Using the bodies of the cloakers we crossed it without problem, and then discovered the chamber was dominated by a massive column, with smaller pillars around the outer edge of the room. Emerging from the highly decorated central pillar came half a dozen shadowy figures.

There are days I wish I had been more in touch with the priestly side of things. Yet that aside, the Great Digger knows what she’s about, and we dispersed the shadows with relative ease, thanks in large part to Joda’s ability to cause daylight to fill the chamber. Even Bob Zombie managed to send one of the spirits back into the pillar! 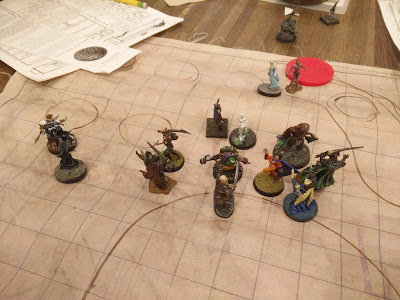 Once the shadowy forms were taken care of we checked the other doorways in the room. The one opposite our entrance was also magically locked, but my magics weren’t strong enough to break the spell. The door with the slime river we avoided, and so by default went for the door opposite the slime door.

Up a long sloping passage we emerged into a semicircular dormitory containing both giant and human sized beds where we found a stash of old books! As we were collecting the books, the old bedding flapped bounced and took vaguely humanoid shape! I lined up 5 of them, and unleashed an empowered lightning bolt, bursting 4 of them. Chicken feathers and burning bits of linen floated everywhere. The 5th and farthest away was badly singed, and smacking at itself to put out the smoldering bits. The remaining pillow spirits were just as quickly ended, while Hilde gleefully yelled “Pillow Fight!”

Makes me wonder about the practices of the sorority of her barbarian tribe.