All knowledge is sacred. My training in the temple, and more so under my master hammered that point home. Knowledge was to be sought out, and preserved. Knowledge is power, the power to defend your home, your temple, your clan.

I have come into power, into knowledge, and for once I’m unsure what to do with it. This seemed such a simple quest at the start: save the families by putting their ancestors bones to rest, thereby breaking the curse upon them.

Hilde and Bran seemed a little worn out after the pillow fight, so we settled on a rest. Rin told of a spectre that visited while we were asleep, and claims he… scared it away. We packed up and moved on, only to discover that the Silver Hook foolishly followed us in. First we found their wizard Kelvin barely alive, holed up in some... anatomical workshop full of surgical instruments and dark texts.

I avoided his magical attack, knocked the wand from his hands, then Hilde poured a healing potion down his gullet. He ranted about rust monsters, and what fool Gerhart is… and that this was the home of a Lich. And that its phylactery was hidden somewhere in the library. We sent him on his way…

Deeper into the dungeon, we entered a cyclopian chamber housing some strange metal orrery stretching out from a central steel pillar wrapped in an external staircase, with arms radiating out that spanned the entire room. First circumnavigating the room, we found no other exits, so we approached the central pillar. Then, from the darkness above, the beardless dwarf of the Silver Hook dropped among us, battered and bloody. He began to speak, whether to warn or threaten us is unclear, as a crossbow bolt shot down from above, killing him. The bolt was followed by 2 figures in ancient garb, cackling about the joy of fresh blood for the first time in 200 years… and they referred to each other by name. 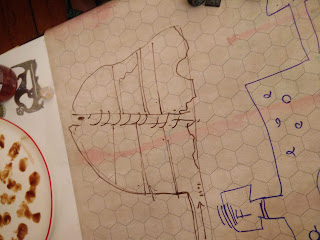 Milli Vanilli and Brendon… The Brightly Banner Brandished! We’d found them… or, they’d found us. The rest of the party dropped down, and the battle raged. Rin and Hilde chopped and slashed with great skill, Bran’s black weapons drained what life force kept them animated, and I blasted them with lightning. Thankfully their movements were stiff, and while we took some hits, we sent their spirits to rest.

But of the lich, and it’s phylactery? Bran spoke to Emmry to confirm their identity, and we then ascended the stairs to the top of the pillar, and the doorway leading into the pillar… and the stairs going down. I was tempted to use Fly, but opted to take it a step at a time.

Destroying the phylactery is clearly now the top priority, though I can’t say for sure that doing so will end the lich, whoever it is, or whether it will just weaken it. Either way, the deed needs to be done. But then, what of the books?