The untimely death of Chadwick Boseman hurts. An amazing actor, and from all accounts, an amazing kind and generous man. The world is a poorer place.

I'm going to take the opportunity to share some Wakanda-esk architecture today, and link to my review of Black Panther.

I know his legacy will live on, having inspired so many. 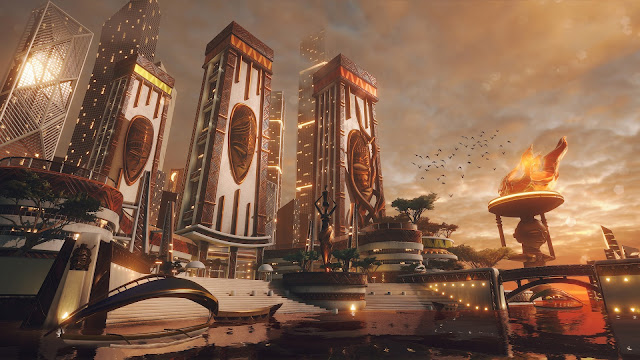 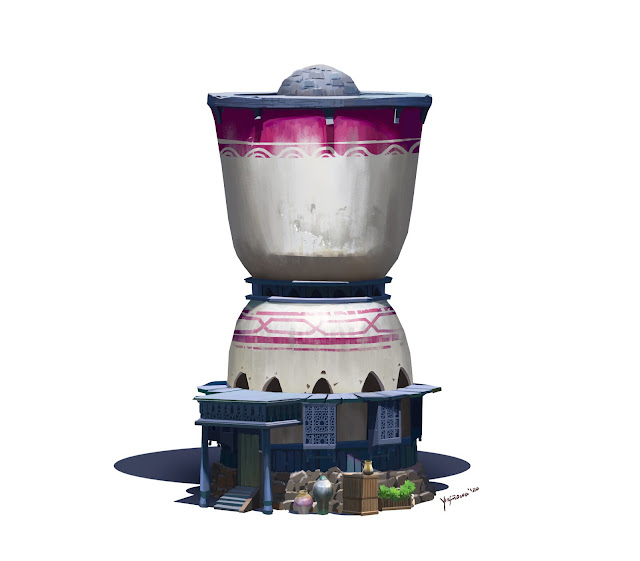 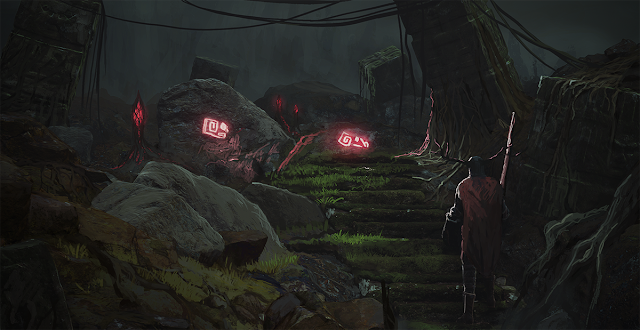 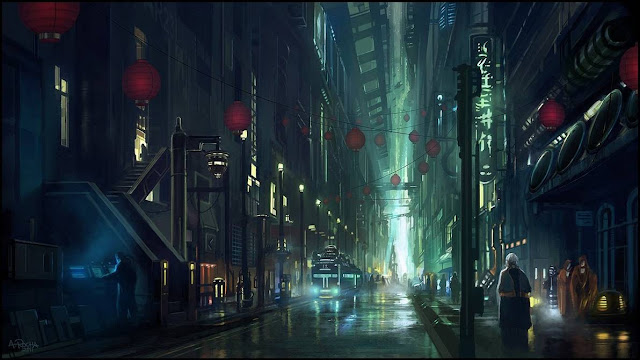 Gearing up and heading straight down into the dungeon, they’re interrupted on level 3 by some spiders. A quick application of fire sends them scurrying, and the party opts not to give chase.

Down on level 4 they come to the common grounds, and it’s again occupied. A dark clad elf is speaking with a bunch of ghoulish figures in ruined finery. The elf is silent, but glares at the party. The others introduce themselves as the Ladies and Gentlemen Ghouls, and they’re delighted to make the acquaintance of the party, and hope they in the future they’ll come to dinner. Joho shares some of his magic mushrooms with the L&GG.

Continuing to explore the living caves, the party returns to the watering hole, and explores she side caves, encountering giant ants. Their bites were nasty, as Morgana and Borumar will attest, and their exoskeletons hard to hack through, but without too too much effort, they killed the 4 giant bugs.

Later there were giant cave locusts, which the dogs were really wanting to chase.

More ants, which were roasted with a fireball, but due to the confined space there was some blowback.

Heading back to the cave with the collapsed tunnel, the party spends some time digging it out. Beyond the blockage is a small cave with a large stone sarcophagus, and a narrow flight of stairs twisting up. Readying all sorts of magic, they open the sarcophagus, revealing… dirt.

Could this be one of the vampire lord’s resting spots? That’s the conclusion the party reached. They then decided to empty it of all the dirt, bless it, and douse it in holy water.

They nervously check up the stairs, finding a chamber with 5 intact pillars and a magically sealed door. The back entrance to Ka’Nefer’s prison!

Having seen enough, the party heads back down, and out. Borumar slips a Karl Koin into the empty sarcophagus as he passes by.

This isn't like any Star Trek that has come before, and that's a good thing.

Why is that a good thing? Because the Trek universe is huge, and so few stories have been told. This new show brings us to the USS Cerritos, a ship that specializes in second contacts. This isn't Starfleet's best and brightest, but they're still Starfleet officers, with a bit more room to grow.

Plus? It's funny. And there should be room for comedies set in the Trek-verse. And on top of that, it kicks off 26 solid weeks of new Trek-Goodness! First 13 episodes of Lower Decks, and then 13 episodes of Discovery season 3!!

And in case you're looking for more Trek action, you can check out this Humble Bundle! You've got about a week left to pick it up.

Get the 368-page hardcover of Star Trek Adventures: Core Rulebook for 50% off the cover price, a savings of $30 when you pay $8 or more! Plus, your purchase will support NAACP Legal Defense Fund. 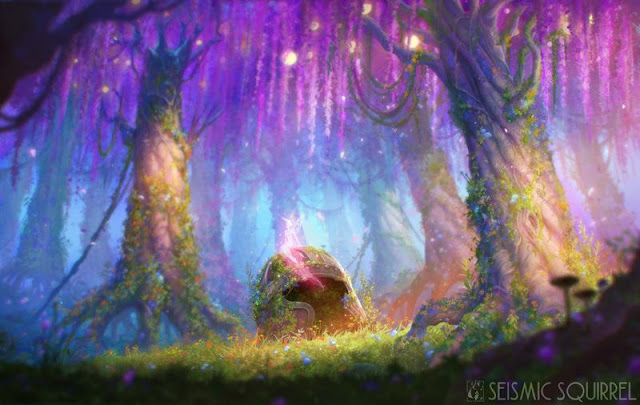 Starting in the eastern living caves (with more party members), the party decides to revisit the locust cave. As they approach they see light from within. An ogre is tossing something to the bugs. Kili(!) charges right in, and the ogre is killed before he can make anything resembling an effective defense. The bugs are hopping all over, bumping harmlessly (mostly) into the party.

Beyond the locust cave they find the long decayed body of a wizard, and his moldy spellbook. They take the book in hopes of being able to recover something from it. Karl leaves a Karl Coin in the boot of the wizard after smacking the skeleton’s ass with his 10’ pole.

Back to the locust cave, then to the south, they spy 4 ogres wrestling with a trio of chained white apes. Along another passage they find 3 ogres in a disgusting kitchen. Fighting 3 ogres is better than fighting 4 ogres plus some apes, so into the kitchen it is. Karl and Kili in the lead. Karl ends up getting smashed by an ogre wielding the corpse of… something that was humanoid. The broken bones were painful, but the various juices in the face were the worst part. Karl hit the ogre back for nearly as much damage as he took. Joho does an impressive scissors kick to an ogre’s crotch then face, dropping him.

Ogres begin to charge in both from the cave with the apes, as well as from further to the south. Ladies Eiric and Morgana use Fireball, while Kili and Boris follow up with Hold Person. The ogres didn’t stand a chance, even the big one in the cobbled together armor.

Looting the corpses, they return to town, only to be pelted by dirt clods from some annoyed gnomes along the road. Eiric uses a single magic missile to cause the gnomes to flee.

Among the various ships I had printed up, aside from all the transports, was a fairly sizable Space Marine Fleet.
The centerpiece of which is obviously the Battle Barge at the center of this picture. It's escorted by a standard Strike Cruiser, 6 Frigates (probably about 25% bigger than they should be) and a single destroyer.
It took me a bit to decide what chapter I wanted them to be. In the end I settled on pre-heresy World Eaters. 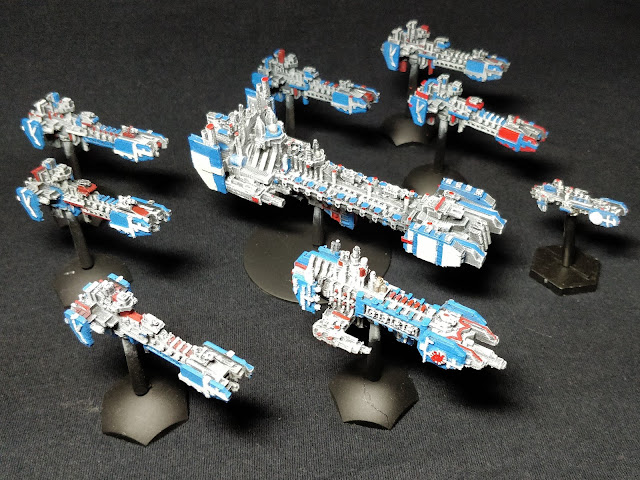 They'll fit in well with the few ships I have painted that are in storage.
I also got a pair of Grey Knight Strike Cruisers, one standard, and one carrier variant. 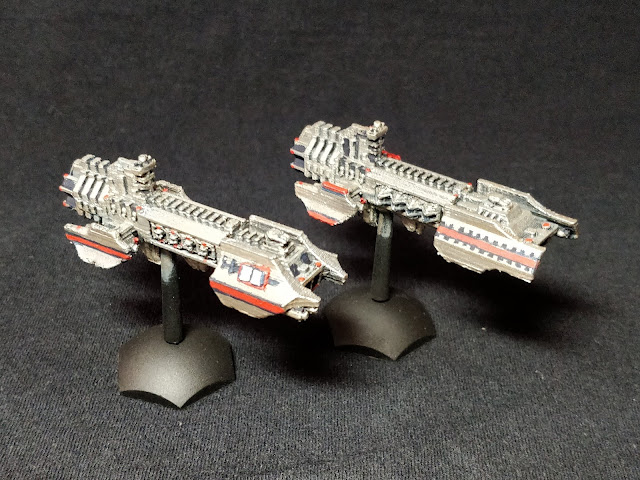 They still have a little bit of detailing that needs doing, but, they're close enough to done to share.

In town, Boris brews some potions of healing, Joho trains Ool in the Mystic Arts, Morgana buys a dog, and Borumar hires a M@A.

Heading to the hobgoblin cave entrance to Stonehell, they’re greeted by a friendly gargoyle perched above the cave entrance. It doesn’t seem to want anything. They ask about Dark Dwarves. While friendly, it’s not very talkative or informative.

The party heads down to level 4. Heading up into the living caves, they pass through the Common Grounds. A troop of depraved berzerkers are chatting with a trio of gargoyles. Everyone watches everyone else warily, but the party passes through.

Wandering around the caves they spot some ogres, but avoid getting spotted. Deciding discretion is the better choice, they backtrack and avoid them.

Finding a cave with veins of gold, the party takes a sample. It will later be found to be fool’s gold. Deeper in the caves Borumar finds and the party avoids a trapped section of ceiling. The sound of insects… large insects gets their attention. Giant cave crickets chained to a post… again, the party decides to avoid that.

The next cave they come to has soft lights dangling down among the stalactites. Again, they avoided investigating this further.

Next they disturb some bats, but discover an artificial rockslide, hiding a hidden passage. Spending the time to dig it out, the rocks continue to fill in. Unsure of how much time and effort it would take to dig it out, the party decides to explore the cave with the dangling lights. What went unseen were the unlit strands that wafted about the cave… and wrapped up the M@A and Morgana’s dog! Using a liberal application of oil and fire, they’re freed from the web like stands, and the party backs out of the cave.

Game pauses in the dungeon…

I joined a couple of groups on Facebook that have resparked my interest in Battlefleet Gothic. The first was a Starship Modeler group, and that lead me to joining a BFG group. Mostly cause I didn't have the space to start building starships from Star Trek. Not at the scale I'd like. Not in this tiny apartment....
But BFG ships are all pretty small... And while I do have a sizable collection of Imperials, Chaos, Tau and Orcs... They're all in storage. And rather than try to dig them out, I just ordered some 3D prints. 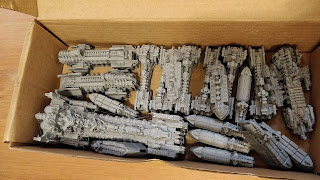 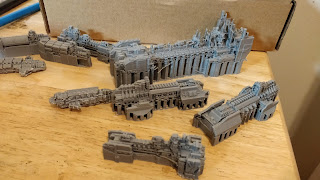 After cleaning the supports off of them, I gave them a good wash, and then primed them black. 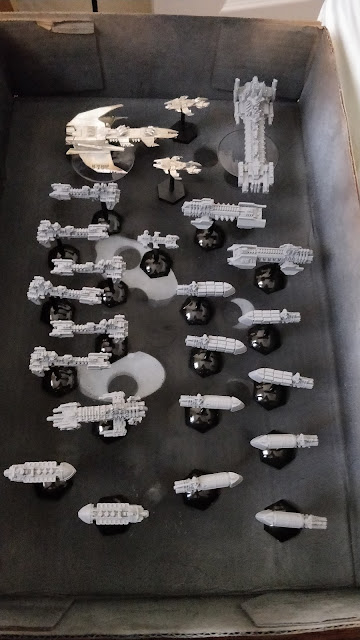 As you can see, there's a good assortment of Space Marine ships and a bunch of transports (middle to bottom right) along with a  pair of system ships (bottom left). Also in the mix are some Noble Armada ships (silver top left) that I had in the back of my mini box. 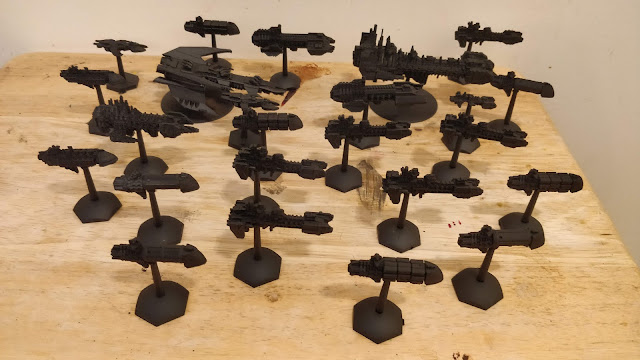 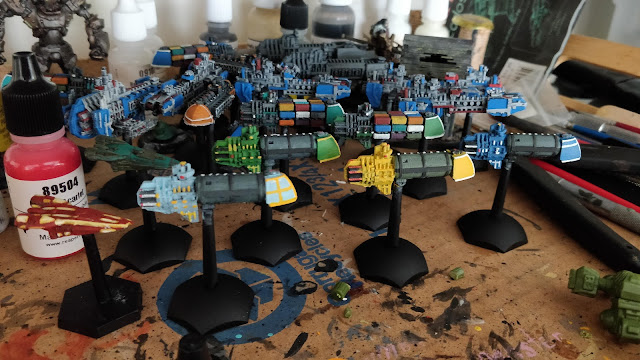 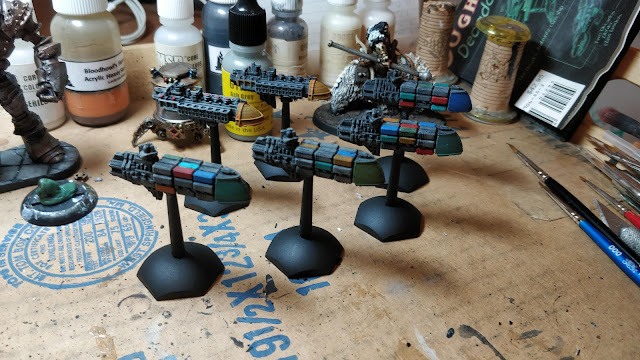 And here are the transports all painted up, along with a pair of system ships. It's hard to see but they're painted up like Coast Guard ships. 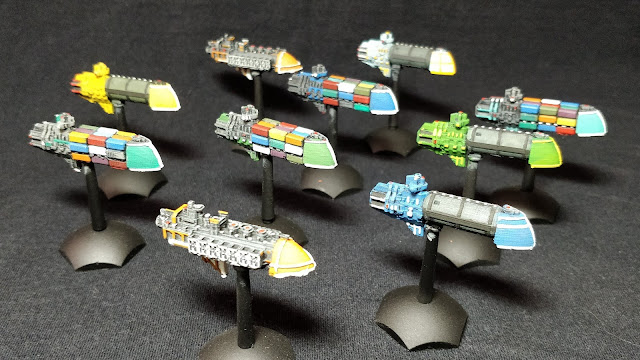 The goal with these was colorful. I think I nailed it.

Picking up in the Western Living Caves, the party stumbles on a pitfall trap that Boris triggers, causing some hurt and killing Noxic and another hireling.

Moving on they’re set upon by 4 giant spiders with yellowjacket coloring and sticky forelegs. Karl, Joho, and Morgana all are grabbed and gnawed on before the creatures are killed.

Down a sloping passage with some bad air, they recover some silver bars and a gold necklace from a long dead adventurer’s pack.

In a large cave with a watering hold swarming with snakes, Karl drops a nate-bomb, roasting each and every one of them.

In a smaller cave they fight an ooze, but mostly succeed in breaking it into a bunch of smaller oozes.

After a bit more exploring they call it a delve and head back to town.

Lady Morgana buys a magic dagger that’s been put up for private sale through the wizards guild. Joho has a potion of antivenom brewed up, while Borumar buys a potion of gaseous form, and also pays to have his dog trained for the next month to make him hopefully more likely to survive the deeper levels. Boris makes a scroll of remove curse.

The pandemic continues. Summer has well and truly arrived. It’s hot, and sticky, and generally I hate it. Work this month was rough with a bunch of people furloughed and fired. My workload has increased just as I’m getting back to studying for the CPA exam.

Gaming
Stonehell continues to be a blast, but I’m so so far behind in my session reports. I do finally have a player who leveled up their character to 9th level! So that’s interesting as we work out the logistics of building a stronghold!

Miniatures
Last month was way more productive than this month. I’ve been distracted and displeased with my efforts on the character minis I was working on, so moved them to the shelf of shame and picked out some easy minis to work on. Currently on my tray are some centipedes, a filth beast, basilisk, and graveyard golem. Mostly they’re based and primed. 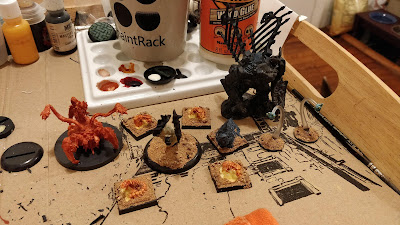 Media
Movies/TV Watched
The Good Place, seasons 1, 2, and half of 3
Star Wars Return of the Jedi
Star Wars The Force Awakens
Star Wars The Last Jedi
Hamilton
The Last Airbender (SO BAD!)


Goals
Continue to catch up on Stonehell session reports
Survive the pandemic
Get back into gear with my CPA studies.