“Dzo, come quickly. It is time.” The young calf said as he stuck his head through the yurt door frame.

The bulky shape lifted itself from the carpets and pillows, its long fur was streaked with gray, and its horns showed the marks of many years, and many battles. The calf held the door flap for the elder. The chill wind cut across the land, blowing the scrub grass and stunted trees decidedly to the east. Just to the north of the yurt stood the low round ovoo.

Crouching low, Dzo descended the stone stairs and stooped under the overhanging lintel. Within the ovoo the round wall was lit by candles placed haphazardly stuck to the irregular stones that made the wall. In the center of the dirt floor was a round stone lined pit. The stones were stained an unnatural yellow with streaks of brownish red. At the bottom of the pit were three red worms, each about 3 feet long, and thicker around than the haft of an ax.

The calf passed Dzo a hooked pole, and he used it to catch one of the worms and lift it from the pit. As he removed it from the hook, the worm hissed, and Dzo’s hand began to smoke. In a rumbling low voice, Dzo called out to the gods of the land. Turning he walked to the far side of the pit, the worm hissing the whole way.

Lifting the worm up, Dzo twisted it in his hands. The hissing grew louder, and the worm spat a coy smelling glob at the wall. Dzo twisted, and with a snap the worm broke, ichor falling into the pit, covering the remaining two worms.

Death Worms are greatly feared among the peoples of the high grasslands. When found, they are usually killed immediately. It is said the very touch of them is instant death, and the strange yellow stains the creatures leave in their wake is merely another indication of the ill wind that follows them.

Death Worms are indeed poisonous. Their spit (30’ range) causes 1d4 damage plus an additional point per round for as many rounds as the worm has hit dice. Touching a death worm causes 1 point of damage for every round of contact, and their nasty bite causes 1d6 damage plus the creature’s hit dice.

Today is the final Monday of October, and this is my The Monstrous Monday Blogfest entry! 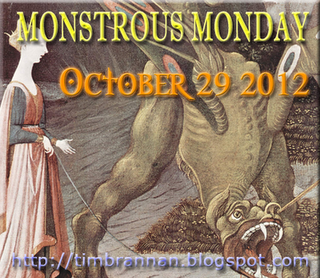