The ancient skeleton pushed itself from the chair, the old sword that once pinned it down slid easily between the broken ribs. Dust and cobwebs billowed up and it reached for the heavy headed mace on the floor.

"Crap" Nimble hissed. "Rathgar! Behind you!"

The fighter turned just as the mace came swinging up, catching the underside of his shield. The shield jerked up and back, slamming the edge into Rathgar's brow. He stumbled, and Nimble sprinted toward them.

As Nimble approached, the skeleton turned to face the thief, a red spark in its empty eyes. Nimble leaped back as the mace swung his way. He darted in, slamming his dagger into the skull. It stuck, and the skeleton jerked off balance slightly when Nimble tried to pull it out. Its bony hand reached for Nimble's face, and he shoved on the grip of the dagger, shoving the skeleton back.

Ignoring the blade sticking out of the side of its skull, the skeleton brought the mace back, ready to swing at Nimble if he closed.

Rathgar wiped the blood from his eyes, his head pounding, and fixed his sight on the skeleton. He stepped toward it, bringing his blade down upon it, lopping one arm off, and cutting through several dry ribs before catching on the spine.

Nimble put his foot on the old chair, grabbed the ancient blade wedged into its back, and pulled it free in a shower of crumbling wood as the chair collapsed. Rathgar and the skeleton were both holding his blade, trying to wrest it from the other. Nimble shifted the old blade in his hand, and struck with a speed worthy of his name. 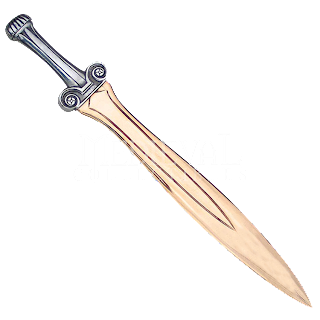 Friend's Aid
This bronze leaf shaped short sword is inscribed with ancient human runes on one side and dwarven runes on the other. It was a gift from an ancient human king to a dwarf thane to cement an alliance between the two. The enchantment laid upon grants a base +1 bonus, and it grants the wielder an additional +2 to damage when used against a foe attacking an ally.