"No! Give it back!" the loud high pitched voice screamed.

"Mine!" replied a voice that sounded like it came from a mouth full of gravel.

"What's going on?" Feris whispered, as the sound of something being tossed across a room came through the door.

"I'm not sure" Allianora replied. "It sounds like the old guy took something from the girl."

"Ha!" The first voice squeaked. "Mine again! And you can't have it!"

"What language are they speaking?"

"Some sort of goblin." Allianora's brow creased as the first voice screamed.

"You can't! It's mine" The sound of a stopper being pulled seemed oddly loud, as was the gulping that followed.

"I never get to drink from it first." the second voice complained.

"No... My master had one. I'll be happy never to see another one ever again." 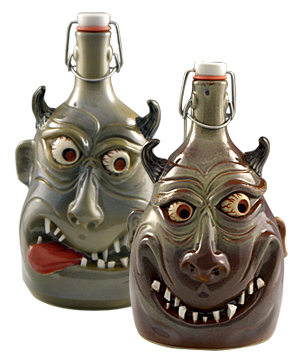 These jugs are always made in image of the face of a goblin, usually looking drunk. The enchantment upon them is unique to goblin-kin, and it causes any liquid poured into it to ferment in a single hour. The resulting brew is highly intoxicating, and vile to non-goblins. Rarely, a goblin jug will produce a magical brew that retains the same taste and intoxicating effects, but also functions as a magical potion (roll randomly). Each jug contains enough liquid to get 10 goblins rip-roaring drunk.