The Pandemic continues… But I’ve now received both of my Moderna shots!It isn’t a guarantee, but it’s as close as I’m gonna get.

In addition to that, we found a new apartment and moved already, which is part of the reason this month in review is so late, and why nothings been posted on the blog in a couple of weeks now. We’re still settling in, and figuring out how to best utilize the space, but it’s so nice to have extra rooms, and 2 balconies! A real embarrassment of riches there… So far the weather hasn’t been super conducive to using it, but I’m doing my best there.

Gaming
Nick the Pike continues his explorations of Rappan Athuk, though it’s been a couple of weeks since I last played.

I also just received my Stargrave Nickstarter. I haven’t downloaded the solo campaign but I will, and I’m going to get some games in!!

Miniatures
I managed to get a few things painted before packing everything up, but haven’t touched a brush since moving. Of everything I painted, I’m most proud of the crab, and entirely because of the can of Old Bay. 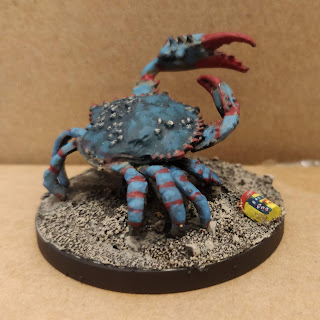 I’m planning on building some Stargrave minis on Monday after work, plus I need to paint up a few things for the Reaper Challenge League.


Goals - keeping it simple this month.
Play at least 1 game of Stargrave
Paint some minis
Play some D&D