Having successfully revived their friend Jo (who needed some time to recover after being petrified, Borumar decided to head back to Stonehell for a little fun. Joining the party for this delve was J, a young swordsman eager to prove his worth in the mightiest dungeon around. Entering the dungeon through the hobgoblin caves, the party spends a while poking around the already cleared 2nd level, slowly making their way down to the third, and finding that without a high level wizard, they weren’t getting through the arcane locked doors and out of the medusa’s lair. So they did the only sensible thing, and continued down into level 4.

Not too far into their exploration they decided to open a door… surprising half a dozen ogres squeezed into a room only just big enough to contain them all. “Sorry, wrong room” J said, closing the door. They jumped to the side, and readied themselves for the ogres to come out the door, and after a long drawn out moment, they did. 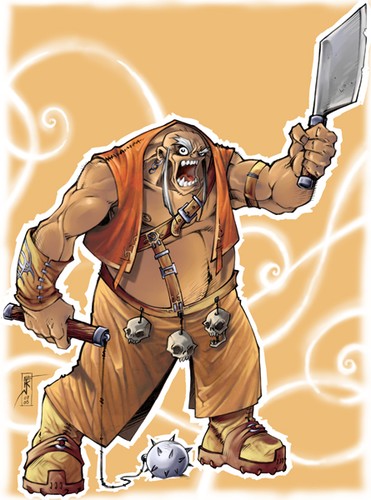 Thankfully for the party, the small (for the ogres) door kept them from all coming out at the same instant. Unfortunately even one ogre hits like a falling tree, and Dimetri was only saved from death by Borumar’s speedy dumping of a healing potion down Dimetri’s throat. Also in the party's favor was the fact that the ogres had to pull the bodies of their fallen friends out of the doorway in order to effectively fight. Somehow, they managed to defeat all 6 ogres… Sadly they didn’t have much treasure on them.

Continuting their exploration down the hall, they were surprised by a pair of gaunt hounds. Dimetri still not really recovered from the previous fight, was dragged down. J and Borumar finished off the beasts, and dumped a potion of extra healing down Dimetri’s throat, and then they all decided that they’d had enough.