After finishing up the wolves from my last post, I wanted to work on something else, and settled on these raptors, the Bones Black Owlbear, and then stumbled on the Bloodwolf. Since I'd just painted a bunch of other big wolves, I figured I'd add him to the mix too. But first, the raptors. No link to the raptors as they're not available yet.

I checked out a bunch of pictures from Jurassic Park/World before getting started. Not sure how much that impacted how I ended up painting them, but I was keeping them in mind. I also looked at a bunch of reptile pics. They'd have some impact a bit later. 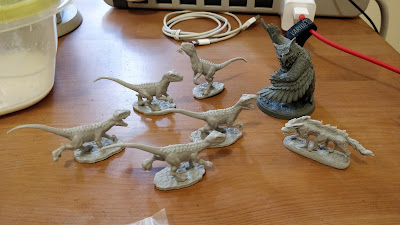 After the usual hot water & dish soap scrub, I glued them onto Reaper's 60mm oval bases.

Then they were given a coat of Reaper's Brown liner, mixed with a bit of flow improver and clear coat. Then it was time to pick a base color. I first picked grass green, but that was way too bright. Then I tried Wilderness green, but that ended up too bright also. I then tried Troll Hide, and liked that a whole lot better. In the picture below, the Wilderness green is on the left, troll hide on the right. 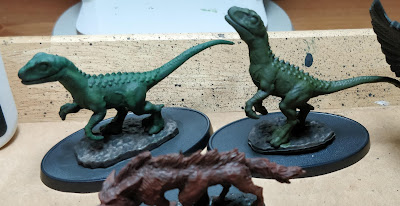 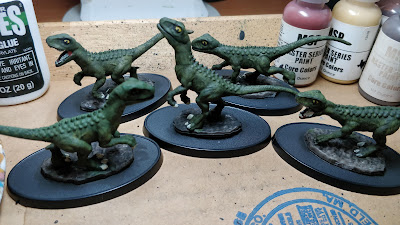 I then used wood glue to attach the base layer of coffee grounds for texture. 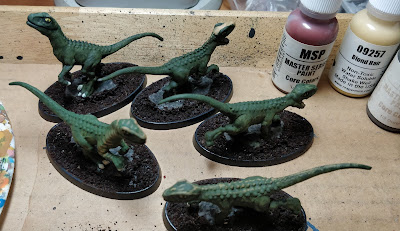 Then I went back and used the leather brown to add some markings to a few of them. Not sure how much I like it yet. We'll see.