The dark fen was still as death as Nethyrmaul glided above the twisted trees, his rotted eyes looking for any hint of disturbance in his realm. A thin line of smoke caught his attention, out toward the old ruined fort.

Barely a dry bump with a wooden palisade surrounded by mosquito infested swamp, it was clear that someone had recently moved in. The worst of the swamp growth had been cleaned out, and the flickering light of a camp fire bounced off the trees.

A few figures were huddling close to the fire. Nethyrmaul’s black still heart raged, and he swooped low, the bile in his gut roiling. As his near silent flight brought him to the camp, he opened his mouth, and let forth a stream of the pent up bile, and the ruined fort began to melt. The screams of the humans were short lived, as Nethyrmaul landed in the ruins, and began to snatch the humans one by one into his mouth, savoring the crunch of each as their shattered remains fell from the holes in his rotted neck. With a sweep of his tail, what was left of the palisade was knocked into the swamp.

Surveying his work, he paused before launching himself back into the air. 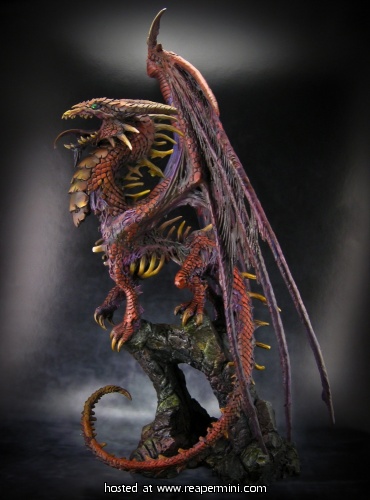 Nethermaul was once a great red dragon, and a mighty spell caster in his own right. He hunted down magical books and artifacts with a zeal that eclipsed even his lust for any precious metal or gem. In his treasure gathering he came across numerous undead creatures, and eventually he captured a lich, and forced it to teach him the dark necromancy needed to attain an unliving immortality. Death has brought only a rotting of his body, his rage burns even hotter now for the living things that can still feel the things he cannot.

Due to his centuries of collecting, studying, and practicing magic, Nethermaul casts spells as a huge gold dragon, and his treasure hoard contains every bit of magic he could collect.

Can you tell I'm excited about getting my Bones order?