Hyrekia looked down from the tower at the destruction that had been wrought. The curtain wall was mostly flattened, the gatehouse destroyed, and worst of all, her beloved Kaladrax lay shattered upon the flagstones of the courtyard. The adventurers had, predictably, decided to immediately head straight into Kaladrax's cave, expecting to find his riches.

"They will be disappointed... and worse when they return to the surface." She said to herself. Turning away from the window, she grasped her staff, and descended the tower steps one at a time.

Picking her way across the rubble strewn courtyard, she walked up to Kaladrax's remains, and ran her hand across the fractures of his great skull.

"My beloved. My sweet. Come, rise up. They are in your lair. They have hurt you, and in doing so, have hurt me." Her hand continued to caress the massive skull. "Your time is still not finished. Rise, and again do my bidding." Stepping back, she tapped the staff's crystal against the skull. It flashed a deep purple, and shattered.

The bones of Kaladrax's broken form began to mend, and the great dragon lifted himself from the ground. His great tail slid across the shattered stones, and his wings flexed. 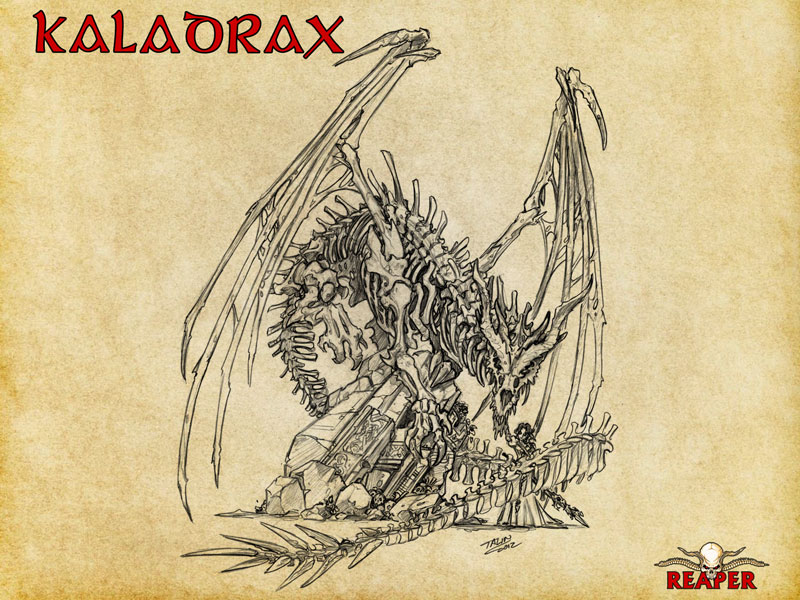 Monster Type: Dragon, Undead (unique)
Kaladrax was a mighty red dragon who was slain a millenium ago. His body was left undisturbed at the top of the mountain where he fell while his slayers plundered his horde in the dungeon far below. 30 years ago the sorceress Hyrekia sought out his bones, and in a ritual that required a month to complete on the frozen tip of the mountain, brought back his spirit and tied it once again to the bones. The process tied her life to his, and as long as she survives she can bring him back to this current undead state, though it drains her everytime she does.

Due to hs skeletal state, Kaladrax is no longer able to fly without Hyrekia’s magical assistance, however he remains very fast on his feet. His breath attack is a cone of darkfire that causes both fire damage and blindness (separate saves required for each). When pressed into physical combat he will sweep the field if possible with his tail first. Everyone in the area of effect must make a saving throw vs paralysis or take damage and be knocked senseless for 1d3 rounds. Kaladrax may also roar in place of his physical attacks, automatically causing fear in any creature of 8HD or less, save vs spells to resist for anyone over 8HD. 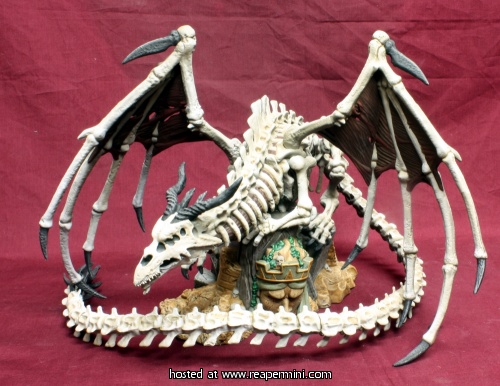