First off, a big thank you to Tim Brannan for writing The Witch, hosting a contest giving a copy away, and for picking me. 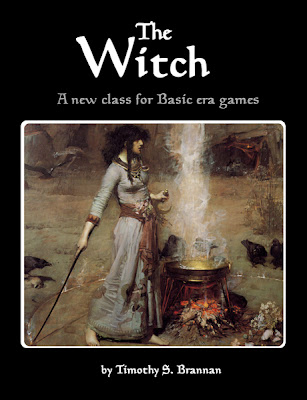 The Witch character class is a blend of magic-user and cleric with a number of additional elements that make it something that stands out in its own way. On top of the basic class features, Witches pick traditions (like wizard specialties or clerics’ deities) which focus their development through the levels, and can also choose to be a part of a coven.

There are 6 traditions available to the witch character:
Aquarians - readers of the celestial bodies
Classical - pretty much the usual stereotypes
Family - mother to daughter type witches
Faerie - witches that consort with various fay beings
Maleficia - those that deal with demons, devils and otherworldly beings
Eclectic - those without a tradition and are picking it up as they go

Spells are of course a large aspect of witchcraft, and the 54 pages devoted to the topic are extensive. Everything from cantrips (0-level spells) to 8th level spells and rituals are covered, as well as a small section on witch spellcraft theory.

Covens give the witch access to a small group of NPCs who can assist with training, provide safety, information, backup, and additional help with ritual castings. This section of the book also goes over the various items traditional to witches, and their uses in-game.

Moving beyond the PC witch, there are also 21 new monsters offered, and numerous witch specific magic items and artifacts.

Overall I'm really impressed. I haven't yet read every word (I skipped a lot of the spells)but I can see just how much flavor adding the Witch class to a campaign will bring. If you have any interest in any of the stuff above, it's well worth your time (and money) to go and pick up a copy for yourself.