The horses hooves beat the ground as their riders spurred them onward. Ahead a herd of Yakmen raiders ran together, their hard pace hindered by their ill gotten gains allowed the speed of the horses to slowly overcome them.

Chuluunbold, holding onto the lathering mount with his knees pulled an arrow from the hide quiver strapped to the saddle. The short bow in his hand was stretched out, and the arrow brought against the string. Around him, the other riders mimicked his movements. 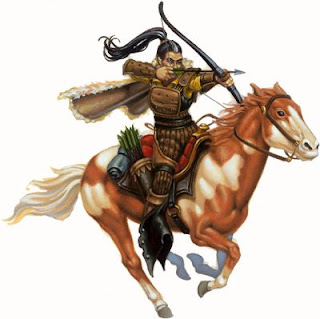 They were almost upon the yakmen when they let the arrows fly. Just as the fletching brushed past the wood, the yakmen skidded to a halt and turned on the horsemen. Some arrows found their mark, but many shot past. The riders swerved, and most avoided the horns and axes of their foes, but two plowed straight into the herd. The riders continuing forward, even as their mounts were taken out from under them.

The remaining riders all readied and shot more arrows into the now stationary targets. The herd again turned and charged toward the riders, unsheathing throwing blades. The riders scattered, continuing their fire into the herd. Arrows protruded from their bodies, but only after multiple hits did they begin to fall. 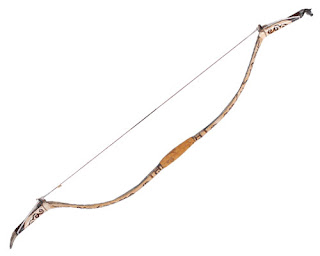 The largest of the yakmen surged out of the herd, nearly catching Chuluunbold with a swing from his ax. Chuluunbold spun his horse, causing it and the yakman to slam into each other. The 3 of them fell, Chuluunbold rolled free of the tangle, managing to hold both his bow, and a single arrow. As the yakman shoved free of the horse, he shook his furry mane, locked eyes on Chuluunbold, snorted and lowered his head. Chuluunbold put the arrow to the bow and pulled back at the yakman charged. The arrow sank deep into the neck of the charging foe who staggered from the hit. It's momentum carried it into Chuluunbold, snapping the arrow, and dropping both of them into the hard dirt.

This magical shortbow is a finely crafted work of art, inlaid with dark wood swirls, and the tips carved into horse heads. When mounted, the bow provides a +3 bonus, and even an unskilled rider will suffer no penalty for shooting from horseback. On foot the bow's effectiveness is reduced, providing only a +1 bonus.