“We will rest here for the night.” the black cloaked druid said.

“What’s so special about here?” Nimble asked. The woods seemed no different at this spot than anywhere else they’d seen.

The druid paused, looked long and hard at Nimble, and then completely around to the surrounding woods. “There is nothing special about this spot. It is much as most places here in the woods.” His gaze returned to the thief. “But it will soon be dark, and since it is much like any other spot, it is equally as good a place to rest for the night.”

Nimble looked skeptical but dropped his pack, and began to help Feris set up the tent. “I don’t like this.” he whispered.

Feris’ mouth crooked up slightly. “The woods, or the druid?”

A quiet chanting caused both men to turn and face the druid, who had removed a stone head from his bag. It took Nimble a moment to figure out what was wrong with it... it had 3 faces, and each face shared an eye with the faces to either side. The druid placed it down on the ground, and the eyes began to glow green.

“See? What is that thing? We don’t know. Maybe he’s summoning an owlbear to eat us while we sleep.” Nimble hissed.

The ground rumbled, and 3 stones, each about as tall as a halfling, sprouted from the ground around the little clearing. Runes carved into their surfaces glowed with the same green as the eyes of the head. 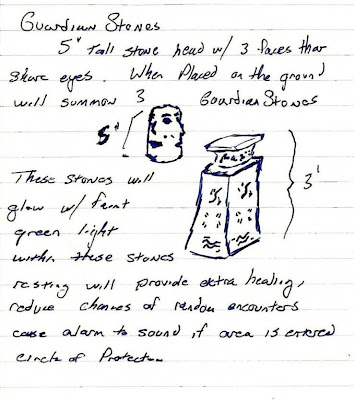 These magical protective devices are rare, and highly sought after. The focus piece is a stone head with multiple faces, each face sharing an eye with the face to each side. When activated, it causes a number of stone rune covered pillars to erupt from the ground. There will be a pillar for each face of the stone, and the more faces, the more powers it has.

4 faces/stones - as above, plus will double any natural healing for those who rest within.

5 faces/stones - as above, plus counts as a circle of protection v evil.

6 faces/stones - as above, plus circle of protection from normal missiles