Greg Gillespie’s Barrowmaze is a two part megadungeon that sprawls under a moor littered with barrows. Barrowmaze 1 is an 84 page PDF detailing the moore and 15 of the barrows found there, and 188 dungeon rooms below. Barrowmaze II details barrows 16-50, and rooms 189-375 and clocks in at over 140 pages. BMI also provides 7 new magic items, 2 new spells, and 31 new monsters while BMII has 31 new magic items, 9 new spells, and 60 monsters (including those from BMI). While written for Labyrinth Lord, it is easily convertible to any of the old school editions of D&D or it’s clones. 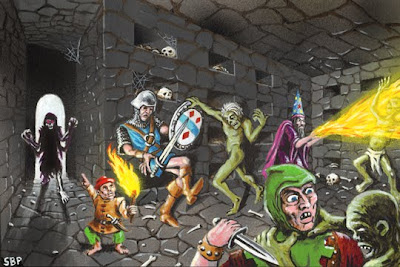 Barrowmaze embodies the “Oh Shit Run” definition of OSR, and PC’s are encouraged to bring along hirelings, henchmen, 10’ poles, and sledge hammers in addition to the usual armor and weapons if they hope to survive! As is appropriate for a haunted moor full of barrows, undead are everywhere. Add to that a mix of cultists vying for control of the dungeon, traps, curses, several independent groups, and some more undead, all topped off with an evil artifact. It’s expected that the player characters will be tomb robbers, rather than heroic adventurers, and while there is the opportunity to show they’re made of more noble stuff, there is nothing requiring them to do anything of the sort.

Unlike most megadungeons, Barrowmaze is a single sprawling level with fuzzy borders between areas. This can mean that first level characters can wander into areas not necessarily appropriate for their level. Some areas a bricked up, while others don’t even have doors, and just getting into and out of the dungeon can take up an entire session. Throughout BM the recurring theme is death and the dead. Tombs, crypts, and burial alcoves are everywhere. Undead monsters are more potent in that they’re more difficult to turn, and they cause a cumulative fear effect on characters. One too many encounters with skeletons, zombies, and ghouls may have your character go stark raving mad! A little time in town carousing can help alleviate the effects if you get out before insanity steals you away.

The overall effect is to create a definite tone to the whole of Barrowmaze. While the dungeon itself isn’t structured in a logical way (as a modern building would be) it also isn’t a funhouse style dungeon, so you aren’t going to find goblins in one room next to a dragon in a room that it couldn’t physically get into. There is an internal consistency within it, and everything works together to help set the mood. All of this is reinforced considerably by the art.

The writing of Barrowmaze is generally concise. Below are 3 room descriptions that give good examples of what you can expect from the bulk of the dungeon.

##. There is a large pile of debris including rubble,
rags, broken wood, and two wooden rafters. The
door on the north and eastern portion of this room
has been bashed down.

##. This room is empty. A broken runic tablet (now
useless) rests on the floor.


A few rooms are given more extensive descriptions, especially if they include important NPCs. Many rooms are similar in description to that last example above. Empty. But, as we all know, Empty only means there isn’t an obvious monster/trap/treasure/special within. Within Barrowmaze there are a number of random tables to help set the stage including both dungeon dressing and graffiti. One bit of complaint - all of the random tables from BMI are recycled in BMII. Granted BMII adds a 100 entry sarcophagus table as well as an extensive system for rolling up random crypts, including geomorphs, but I still would have liked more graffiti and even a rumor table. With the various factions within the dungeon, I’d expect a fair amount of tagging and smack talk between them. What didn’t I like? Very little. My biggest issue was the map. I bought the PDF version of BM I + II, and there isn’t a single image with the whole map. I know that Greg released a high quality mapset that you can buy seperately, but I’d be happy with a low-res that I could print out on a sheet of legal paper or even 2 letter sized sheets. I also wish the illustration books weren’t so expensive.As much as I’d love to pick them up, I can’t justify spending $16.66 each for the 2 PDFs, even knowing that the art in them is as good as the art in BMI + II.

I would definitely recommend at least picking up Barrowmaze I, and strongly recommend Barrowmaze II, and I'd suggest doing it now. Why? Because Greg is giving you 10% off for Thanksgiving.