"This isn't a joke!" The farmer's face contorted as embarrassment, fear, and desperation flashed rapidly across it.

"Where did it come from?"

"A druid came through a couple of weeks ago. When he demanded I let him sleep in my barn I asked for something in return... he offered to bless my harvest feast bird... to make it the biggest bird the hamlet had ever seen and to make its flesh rich and wonderful." He paused. "In hindsight I should probably have just let him stay without bother."

"That would have been wiser." Rathgar sighed. "So where is this overgrown turkey?"

"Its been in the pumpkin field since yesterday." He said pointing off to the north. "Blake's boy went out to shoot it last evening. He only riled it up, and..." He gulped. "His body is still out in the field." 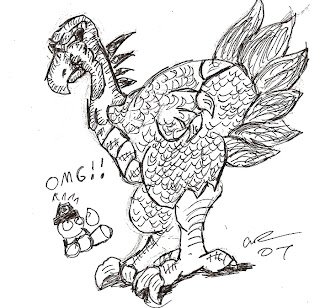 A Dire Turkey may also perform a kick attack. Opponents hit with the feet must make a saving throw vs petrification or be stunned for 1d4 rounds. Opponents wearing a helm get a +2 to the saving throw.

Dire Turkey meat is highly prized and will fetch a good price if the market is available for it. A full grown dire turkey can easily fetch in excess of 750gp in a large village.