"Are you ready?" Dzo asked the assembled herd kneeling around the pit of the Death Worms.

"We are" their voices answered in unison.

"Then take this vessel, taste of the Red Water." Dzo handed the jug to the first kneeling figure. His large brown eyes watched as the pitcher was brought up to the supplicant's lips, and the water flowed over them. The pitcher was lowered, and passed to the next figure. The first gave a slight cough, and then fell forward into the pit.

"His mind was not ready." Dzo said sadly, watching the worms investigating the body.

The second figure trembled as the pitcher came up to his lips.

This potion opens the imbiber’s mind, unlocking mental powers... if they survive the experience. Anyone drinking this potion must make a saving throw vs poison or die. Every attempt to drink another Red Water after the initial attempt suffers a cumulative -3 penalty to the saving throw. The powers gained are rolled randomly, and are per the spell description unless noted otherwise. 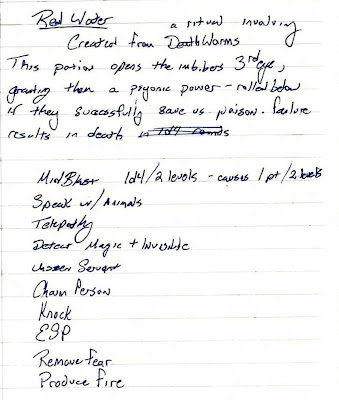