The frogmen had them surrounded. Sheltering on a dry spot in the swamp that once held a cottage, they had nowhere to run to.

Rathgar grunted as the arrow glanced off his helmet. "Can you pull something out of your hat?"

"I'm out of spells!" Feris yelled.

"What about that scroll you found?" Nimble asked from behind a bit of crumbling wall.

"You won't get the chance to copy it if you're dead"

Feris groaned as more arrows clattered ineffectively around them. Pulling the stained vellum from the case, Feris read the arcane runes. The scroll dissolved into slime in his hands. The frogmen started croaking very excitedly, and lots of splashing could be heard.

Rathgar dared to look over the edge of the wall. An impossibly large slug, bigger than the island they were on was currently munching on a frogman. An eye stalk swiveled around to look at the movement. "You have that thing under control, right?"

"Nope! Better run!" he replied, leaping up and running directly away from the monster. 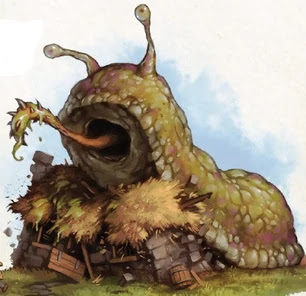 When this spell is cast, the magic user must roll a d20, add their level to the result, and consult the following chart.