Earlier this summer I read Myke Cole’s newest book The Armored Saint. It’s about a very Joan of Arc young woman in a world where demons are real, and are battled constantly by inquisitorial squads who do all they can to root out any trace of demonic activity, lest they manage to intrude their way into the world and destroy it. 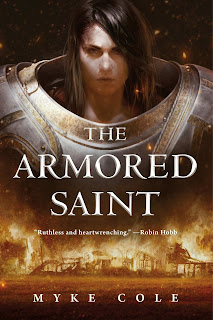 It’s taken me awhile to actually sit down to write this review, in spite of the fact that I devoured this too slim volume, and am anxiously awaiting my pre-ordered copy of the second installment of the series. Originally I tossed up a very brief “This is a really good book” review on goodreads, but The Armored Saint has lingered in my brain.

It’s should come as no shock that the main character Heloise ends up wearing the suit of armor, though the question of demons lingers. Would this story be a fight against the demonic hordes, or would it be against a false(?) religion that has enslaved the people? How does a teenager capture the hearts of those who might be her followers? The men of her village are veterans, they’ve seen war, fire, & death…

In this brutal short novel Myke manages to convey the emotional bonds that ties a small community together, the friendships, the disagreements, love and concern… And repeatedly puts those bonds against some nasty external (and internal) challenges. It should not come as a shock that deaths stack up fairly quickly. Loyalties are tested. Good people do bad things, they fail, and in failing there is grief, but also second chances.

And because Myke managed to describe the climactic fight at the end of the book so well, I’ve been planning out a diorama… We’ll see if I can capture the brutal fight in 28mm as well as he did in prose.