For many months now, the Bones Eye Beast (very clearly not an IP infringing Beholder mini) has been lurking in the corner of my painting tray. For most of that time it was consigned to being abused, being slapped with whatever leftover paint I had out, then shoved back into the corner.

Truly a sad existence for such a monster. 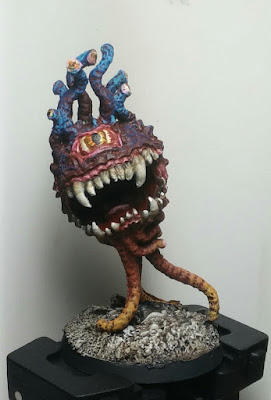 So I decided to do something about it. And since I'd already used a rainbow of colors on him, I decided to take that as my theme and run with it. At the point I decided to do this, the beast was mostly red. I had a clog that spit out way more paint than I needed, and... well...

Moving down toward the base, I added orange, and then to yellow. Going up, I took the red to Imperial Purple and then up to Oceanic Blue. 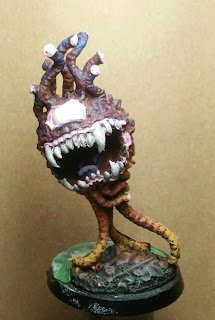 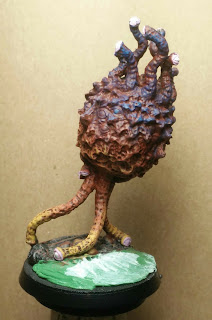 The gums and outer edge of the eyes were painted with Breast Cancer Awareness Pink, while the eyes and teeth got Linen White as their base coat.

I painted the central eye with Rich Leather and Driftwood Brown, with flecks of Dragon Bronze. The pupil was painted with Nightmare black. The blood vessels are heraldic red. 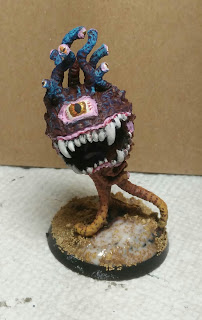 At about this stage, pretty close to done, I got some advice, and mostly was told the eye wasn't scary enough, and the teeth should be dirtier. I decided to glaze both the eye and teeth with a sepia wash to make them more yellow. I focused, with the teeth closer to the gum line.

I also wanted to tone down the pink a bit, and gave all pinks a glaze of Dragon Red. 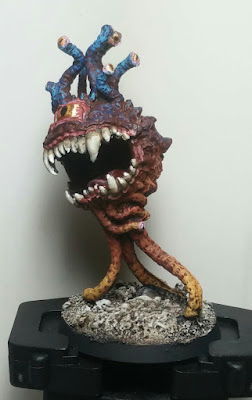 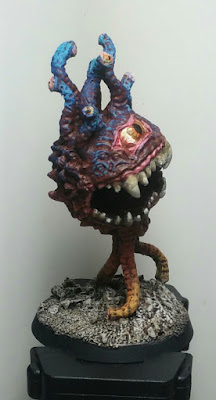 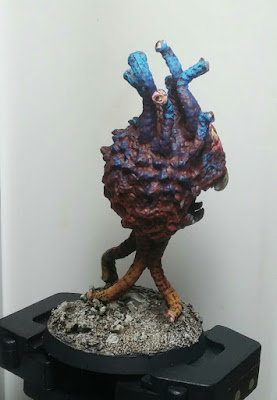 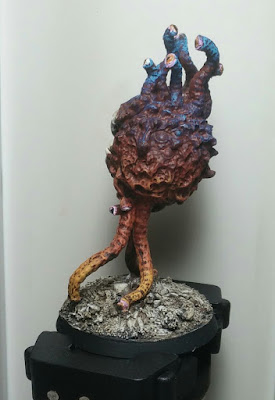 The base of the eye beast is covered in scattered treasure. After I glued it to a 2" base, and glued a washer to the bottom of the base to help with the highly unbalanced mini, I decided that I didn't want to use the molded base as it was. So I used a little extra greenstuff and evened out the difference between the integrated base and the larger base I glued it to, and then covered the whole thing in sand. When the glue was dry I base coated it with Brown Liner. Then I drybrushed it with a blend of Dragon Red and Rich Leather, and a tiny bit of Brown Liner. Then again with just Rich Leather, then with a Rich leather & Driftwood Brown blend. Then I added in some Linen White.