It doesn't happen often, but sometimes at work I just start to doodle, and sometimes I draw dungeon maps. 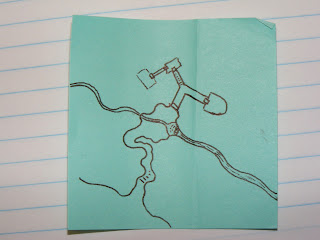 This first one is obviously on a post-it.  It's a natural cave that slopes down to a chamber with an underground river.  At the back of the chamber is a stone door, leading to a worked corridor.  Going left takes you even further down into a set of linked rooms.  Going right brings you to a semicircular chamber. 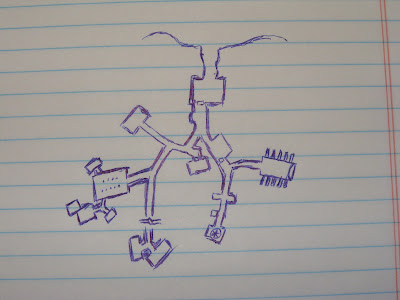 This dungeon is also dug into the side of a hill/mountain, but is completely worked.  Along the right there is a large chamber with multiple deep alcoves, and a raised area at the back.  Down at the bottom is a chamber dominated by a large statue.  Prior to that chamber is a small hidden room.  Further to the right, is a very very long corridor leading to a pair of rooms.  So long I didn't bother drawing the whole thing, but I'm thinking probably a mile or two long, and sloping very gently down.  Before that is a side branch with a pillared chamber with several smaller adjoining rooms.

Email ThisBlogThis!Share to TwitterShare to FacebookShare to Pinterest
Labels: map