It's too late to start at the beginning, and too soon to start at the end, yet here we are. The final page has been turned, the cover closed, and as much as I hate Mark Lawrence for creating Jorg and releasing him into my mind, I also can't help but be blown away. The Emperor of Thorns was just about as perfect an ending to the trilogy as could be written. 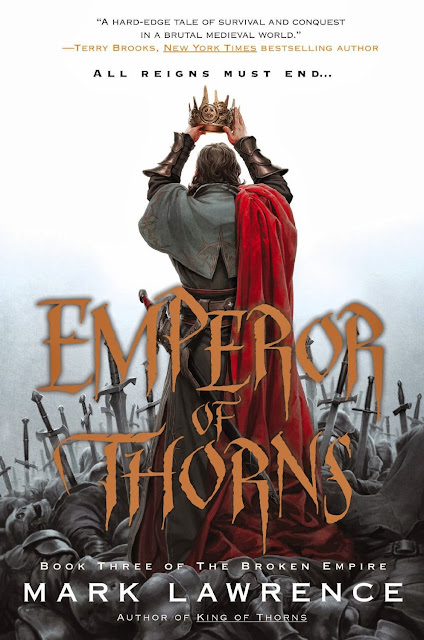 As with the previous books, this one splits its time between the main plot of Jorg and company heading to Rome for the 4 year congregation where the kings of the broken empire vote for a new emperor (there's never been a successful vote), and years in the past with Jorg exploring more of the world, and this time instead of the diary pages, it's the story of one of the Dead King's necromancers Chela.

I absolutely loved how the congress and the pope were handled. The truth of the Dead King I guessed kind of early on, but that didn't take away the impact of it. Jorg's interactions with the ghosts in the machine was fascinating, especially in light of the ghosts' own agendas.

As I pointed out before, this world of the Broken Empire is a dark one. It is violent and grim, but never gratuitously so. Mark Lawrence never, in the entire series adds more violence than the story calls for. Even the violence that Jorg perpetrates is done out of... necessity is the wrong word but with the right meaning. In the previous book Orrin was good and noble, a uniter. Jorg is only a uniter because he wants to be emperor, and will stop at nothing to achieve that goal. The world of the Broken Empire forces that necessity, and rewards Jorg, because the good and noble and pure can't exist there. Jorg would take great offense at being told the world had rewarded him for anything... 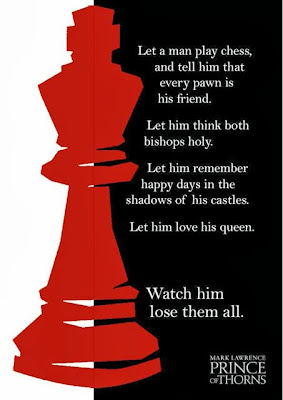 If I write much more I'll spoil the whole series, which is unfortunate because it's so good and I want to write about it! I just hope that while this is the end of Jorg's story, we'll get to see more of the world of the Broken Empire.


I would like to thank Mark Lawrence and his publisher Ace Books for sending me a free review copy of the Emperor of Thorns. I didn't know when I signed up for it that it was the third book in the trilogy. Yet, if I hadn't signed up, I probably wouldn't have started the series, and that would have been a shame.