Over the weekend I attended the grand opening of Dropzone Games. If you ever visited the GW BattleBunker in Glen Burnie, then you know exactly where Dropzone is! It is now an extremely well stocked game store, with more than ample tables to play on and painting stations to work at. 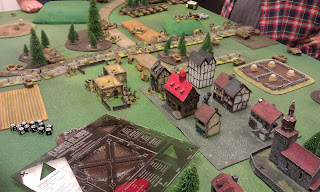 I got to meet Andy Chambers and Dave Taylor. Andy was demoing a new WWII fighter plane game that he's developed. I'd link to it, but he hasn't gotten that far in it's development. If you're interested, drop him an e-mail and he said he's share the rules.

Dave Taylor was working on painting his early/mid war German tanks for Flames of War, and we spent a while talking about the game, and the difference between painting 28mm minis and the smaller scale 15mm minis. 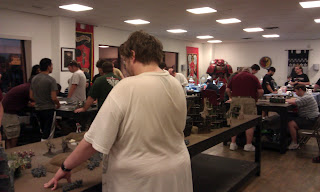 The staff were all very friendly and very up on the latest in miniature wargames, and the store's stock certainly reflected that. In addition to Flames of War and Warhammer and Warhammer 40k, they also had a full selection of Warmachine and Hordes, Dust Tactics, Mantic Games' Kings of War and Warpath, a selection of Warlord Games historical minis, some resin kits and conversion pieces from Scribor, Forge World, and a couple of other companies, and a bunch of terrain and paints and other items from companies like Gale Force 9. 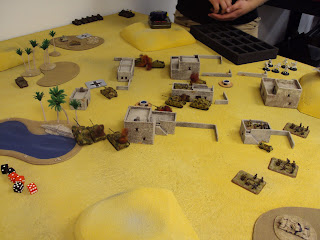 As part of their grand opening they were hosting an open painting competition (any manufacturers minis), a Flames of War tournament, Kings of War tournament, Dust Tactics demos, special guests, and raffles. All in all it seemed well run, and I think I'll probably be going back there on a fairly regular basis... especially if they manage to rope me into playing Kings of War... but more on that tomorrow.

Email ThisBlogThis!Share to TwitterShare to FacebookShare to Pinterest
Labels: Dropzone