I've been thinking about D&D settings, and the many things that many people have written.  One of the ones that keeps coming back to my mind is that a setting more akin to ancient Greece is more in keeping with what D&D tries to do better than medieval Europe.


"The reasons I think the Greek civilization is a better model for the fantasy genre is because it was polytheistic, it consisted mainly of independent city states, and because the monsters of its mythology are so commonly associated with the fantasy genre."


I stumbled upon his post completely by accident when I clicked on "Next Blog" but it tied in to what I'd been thinking about for a while now.  Playing in a realm of city states allows you to do some things, like war and travel between different cultures with a greater ease than you can get with a more medieval setting.  It brings things down to a more manageable scale, especially at lower levels.  Plus the geography of the Aegean Sea just cries out to be used in a game. 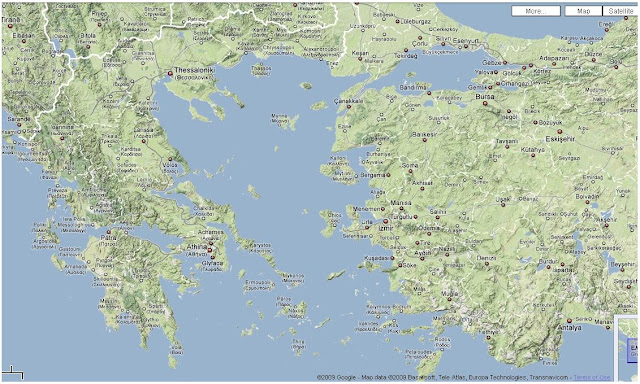 Look at all that hilly and mountainous terrain, the string of islands, and of course the great cities of Istanbul and Athens!  Plus it really is the cross roads of the ancient world, and when your players are ready for a change of pace there are lots of options!  Sail to the south and you hit desert.  South-East, and you hit Egypt.  East and you hit Persia, North/NE and you come to the Slavic lands.  West brings you further into the Mediterranean where you might encounter vikings, Romans, and/or Spaniards.  Of course you can switch that up just to keep player from using their real world knowledge.

Could using this idea lead to a Hercules/Xena type game, full of silly and completely incorrect historical mash-ups?  Absolutely!  And if everyone at the table is having a good time, then who's to complain?