Allianora stood over the dusty skeleton in the rotted robe.  Rathgar, Nimble, and Feris stood off to the side and looked around at the various murals that adorned the wall.  "She made this a haven against the darkness" she siad softly.


"The priestess, for her followers.  They trusted her."  Allianora knelt down next to the body, gently lifting her skull and looking into it's empty eyes.  "She did the best she could for them, but they were overwhelmed.  The last of them barricaded themselves in here... they were safe, but trapped."


"What kept the attackers out?" Rathgar asked.


Allianora reached over to a dark circlet with several odd protrusions. "This." 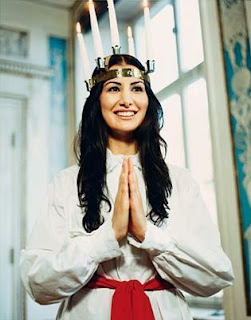 The Crown of Candles is a holy relic from ages past.  It appears to be a silver circlet darkened with age, with two bands that cross over the top.  There are 4 protrusions spaced equally around the circlet, each designed to hold a tall tapered candle.  At the center of the cross is a fifth spot for a candle.  When worn by a female cleric or other holy woman of good/lawful alignment with 5 lit candles, it will provide light as the spell until the Crown is removed.  In addition, all those of the same alignment as the wearer of the Crown will be under the effect of the Bless spell, and the area illuminated by the light will be under the effect of a Protection from Evil/Chaos.

Creatures of evil/chaos will be magically inclined to ignore the crown, should it be encountered unlit.  A Save vs Spells at a penalty of 4 must be passed for them to treat the crown as anything other than a silver trinket.