Allianora knelt with her head bowed inside the glowing circle.  She ignored the soft flares that periodically flashed along the edge of her vision as she continued her prayers.  The shifting transparent forms were confused and angry, and at least a half dozen must have been drawn to the circle.  They flitted about like moths around a candle, and their soft moans mutterings filled the air.

Her prayers were answered when the dungeon door slammed inward and a large man in scale mail took in the scene.  The spirits reacted quickly moving toward the unprotected warrior.

"Crap.  We've got spirits!" he said, dropping his sword for a small silver dagger.  He raised his shield, slashed with the dagger and worked his way through the doorway.  Behind him a smaller swarthy man dropped a silver coin into his slingshot, and a young sorcerer raised his wand, blasting one of the spirits from the depths of the earth.

Allianora raised herself, hefted her mace and holy symbol and joined the fight against the spirits that had kept her trapped. 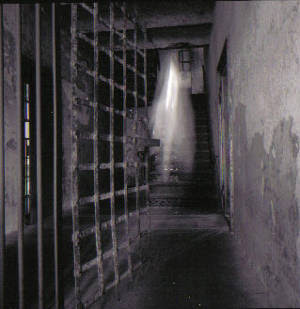 Restless Spirits are incorporeal undead formed by the spirits of those who died and yet can not move on, and have been driven mad stuck on the prime material plane.  Their cold touch wounds the very life force of those it comes into contact with, causing both physical damage and also draining 1 point of wisdom with a failed saving throw vs. Paralysis.  Drained wisdom will be recovered at a rate of 1 point per hour of rest.  Anyone reduced to 0 wisdom is dead and will rise as a restless spirit.

Due to their incorporeal state normal weapons will deal only a single point of damage per hit to restless spirits.  Silver and magical items will cause damage as normal.  Like all undead they are immune to all sleep, hold, and charm spells.

The very sight of these creatures will cause a moral check for anyone with 1HD or less.


The inspiration for this is from the video game Jade Empire.  I wanted a low level incorporeal creature that wouldn't necessarily just trash a 1st level group on sight, yet would still be a fear inducing.