It was the perfect time and place for an ambush; twilight, along the bottom of a small valley trail.  The trees provided cover, and the moderately steep hills limited the escape possibilities.  Unfortunately for Ulrick, he realized this moments too late.  The rustling of leaves heralded the goblins trap, and while they aren't much trouble in small numbers, Ulrick found himself surrounded by significantly more than a small number.


"No move!  No move!" Several of them called out.  "Wants your gold" one of them snarled "an we maybe not cuts you."


It was a tempting offer, or it might have been if only to avoid the bother, but Ulrick was carrying many times more than he was willing to part with.  He had a deal to conclude after all.  "Very well" he said, and reached into the bulging sack at his side.  A simple skull was all that he removed, and in the moment before he tossed it to the ground, the assembled goblins became slightly more wary of their trapped mark.


The skull rolled a few feet, and came to rest under the filthy boot of a goblin, who looked down at the skull, and then up to Ulrick with a quizzical expression.  His look quickly shifted to surprise, and then pain and the skull (and his boot) caught fire.


The flaming skull rose up from the ground, and a body formed beneath it.  Clad in black spiked leather, the figure whipped a chain around, and smashed it into the nearest goblin. 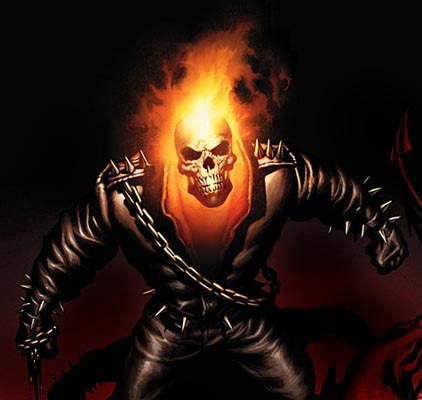 Zarathos was once a great human warrior.  During his time he defeated all those who stood in his path, gathered an army under his banner, conquered several small boarder kingdoms, becoming one of the mightiest warlords who've ever lived.  As time passed he challenged mightier and mightier foes, slaying dragons, and demons.  Eventually he raised the ire of several lesser demon princes who jointly dragged him into the abyss.  To the dismay of his abductors, Zarathos' soul was already so blackened that he became a demon prince himself, and he slew them all.  He went on to lead armies of demons before he was stopped by the Paladin Citadel and his band.  Stopped, but not destroyed.  Zanathos' spirit has been contained within his own burning skull, and he can be brought forth to fight for whoever owns his skull.

The Skull of Zarathos is an evil enchanted skull.  Once per day the bearer of the Skull of Zarathos can summon the spirit of Zarathos to fight for them.  Due to his defeat and confinement Zarathos' power is greatly diminished from his time as a demon prince, and he will fight (roll a d4 and use the stats for a hill(1), stone(2), frost(3) or fire(4) giant) for no more than 10 rounds.  His chain is +3/+5 vs Demons, and can be used as if it has a range of 10'.  The Skull of Zarathos also has a power score like a magical sword of 16 and an alignment of Chaotic (or Chaotic Evil), and it will attempt to take control of whoever wields it, as would a magical sword.  It will also make an attempt every day at sunset.  Should Zarathos gain control he will take over the body of the wielder, rather than manifest as a separate individual, and will remain in control until the next sunrise.