"Please don't go away!" the metallic voice whined.  "You need me!"
"I don't need no loud mouthed robot mucking things up for me.  You're useful, but you never do shut up."
"It isn't like I ask you for much, just kill some people for me.  It isn't even like they're real people.  Muties aren't real people..."  The head began. "Only humans like you are real people, humans and androids of course.  See, that's what being nowadays don't understand!  They aren't human, so they aren't people.  It's really a pretty basic concept, even for a dumb meatbag like you!"
"See, this is why I'm leaving you here."  The door swung shut, leaving SI-351840189910d in the dark.
"If I had my body you wouldn't dare leave me here!" Sid yelled.  No one answered.  Not for a long time. 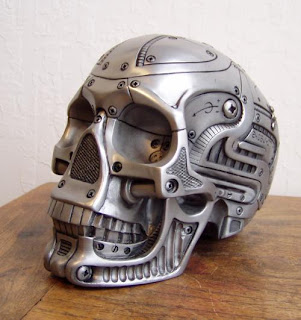 SI-351840189910d (Sid for short) is the head of a robot series that was designed to wipe out mutants, well before they were as common as they are today.  Due to Sid's extreme age he has developed beyond his initial programing and is a true AI.  Sid comes equipped with a Class IIb sensor system (upgraded chemical sniffer), self-recharging battery, extensive knowledge of ancient tech which will provide a base +20% to the chance of success to all technology rolls, a strong prejudice against mutants, and a vocalizer with which to share his knowledge and his prejudice. If asked what happened to his body he will claim one of the following:

A one-eyed mutant blasted it out fron under him
Chopped up by a short kanuk mutie
Smashed by a furry blue smartypants
Ripped apart by a mutie that looked like an android
Picked up and dropped by a winged freak
Lost it to a card shark mutie
Sold it to a blue devil mutie for everlasting life... as a head.
Stolen and sold as scrap by a bunch of sewer dwelling troglodyte muties.