Magical Skulls - Dawn of the Sungod

Caldur tossed him once more across the room.  Edgar slammed against the wall and slumped to the flood.  "I grow tired of you." Caldur frowned. "It's a shame too... you're the only one to give me any sport at all!"  He walked over to the golden mace that glowed with an inner radiance.  "Where ever did you pick up a holy weapon such as this?  I supposed you looted it from some tomb like this one."  He squatted down next to the mace, holding his hand just above its grip and squinting into its light.  "Pity it's just going to have to sit here for now.  I suppose it wont even collect dust, will it?"


Caldur turned to look at Edgar, and found him pulling himself on his one unbroken arm toward a backpack in the corner.  "Oh, now what could you want in there?  A healing potion?  Or even some holy water?  Let's see shall we?"  He stepped over to the backpack and picked it up just out of Edgar's reach.  Right on top he finds a small vial of holy water.  "We'll dispose of that, yes?  We wouldn't want anyone to get hurt."  Caldur poured the holy water on the broken man at his feet.  "Feel better?"  Looking back in the bag Caldur notices the sparkle of amber.  Reaching in he pulls out a small carved amber skull, just big enough to fill his hand.  "Now that's gorgeous!"  He squats down and holds the skull in front of Edgar's face.  "You have to tell me..." Caldur says softly "where did you get this!  It's exquisite craftsmanship."


Edgar smiles through broken teeth and says "Pelor's temple in Afar.  It's called Dawn"  With that final syllable the amber skull begins to glow with a blinding light that lasts only a few seconds.  As the light fades the skull drops to the ground next to a pile of ash.  Edgar lays still, breathing slowly through the pain, thinking about the healing potion that Alan always kept on him, hoping it survived the vampire's assault. 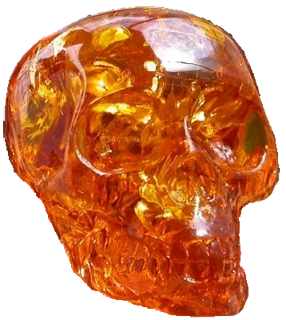 Dawn of the Sungod is a carved amber skull about 3 inches in diameter.  Once per day, after having been exposed to the first rays of the morning sun the Dawn of the Sungod can release the morning light in a single round, damaging or destroying creatures vulnerable to natural sunlight. The Dawn of the Sungod may instead be used to release daylight more slowly, acting as if emanating a light spell with a 6 hour duration.  The  sunlight may be stored indefinitely before being used for either power.  The command words are "Dawn" for the sunburst, and "Radiance" for the light spell.