The room was cold.  A thin layer of frost covered every surface.  Delicate ice ferns seemed to grow across stone and glass, and in the far corner of the room a spider's web was captured in this unnatural winter's embrace.

The goblin's feet made soft crunching noises as it stepped cautiously into the frozen room and looked around.  His clan-mates stood outside the door, unwilling to leave the summer warmth of the ruin for the unnatural cold.  Goosebumps covered his arms, and his breath came out in billowing white clouds. The glass-doored cabinet was completely frosted over, but he knew that shiny trinkets were often kept in such displays.  He opened the door, and saw what he had hoped.  Numerous knickknacks filled the shelves.  He grinned, his wicked teeth showing gaped and yellowed.  Then he saw it looking back at him; a crystal skull, swirling with cold.  He shivered from that cold visage, and his crooked teeth began to chatter.


Shaking near uncontrollably he closed the doors.  "Nothing, it's already been looted."  He turned away from the cabinet.  "Lets go, this place is cursed."

"Cursed!?" His clan-mates hissed and backed away. 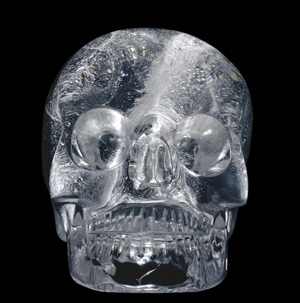 Winterkill is an enchanted crystal skull that always appears to have a blizzard blowing inside of it.  With the proper command word, the bearer of Winterkill can summon forth a very localized snowstorm 3 times/day lasting for 10 minutes.  This snowstorm reduces viability to 5', reduces movement to half, and causes 1d4 points of cold damage every round that a creature is in it.  This snowstorm occupies an area of 120'x120'x120'.  The bearer of Winterkill suffers from none of these effects, and will never have their vision impaired by winter weather.