Day 18 brings us to Gods and Immortals. 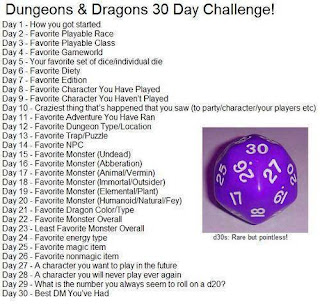 In spite of the fact that I've written some immortals of my own, I've never actually made a big use of religion in my games. It's a shame too, because there's so much good stuff you can use it for. Quests especially. Weird quests, especially if you get some really small gods, local, petty gods demanding all sorts of crazy things. It works even better when there's a cleric in the party.

One way of using gods that doesn't work is with big gods. Gods that look down over continents, and count their followers in the tens and hundreds of thousands. Then you end up with gods who aren't going to take much interest in a low level party. It's the same problem the Forgotten Realms has with it's super high level NPCs. 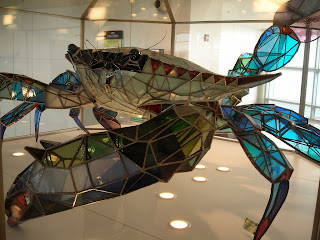 St. Chald The Brilliant
Immortal of The Great Bay

St. Chald was a sailor and fisherman on the great bay, before he became an adventurer. No matter where his travels took him, he always returned home, and back to the water, even when he achieved his immortality.


Chald's avatar appears as a giant stained glass blue crab which will attack with it's great claws, and an hot oily breath weapon (2d6 damage, 1d6 additional damage for3 rounds, 30' range). He is fiercely protective of his waters, those who sail on them, and fish in them, but has little interest in the goings on beyond his beaches, except as they impact the water. Like the waters of the bay, St. Chald is a capricious godling, and the sailors and fishermen who ply the Great Bay make frequent offerings to him, often of bottles of the local spiced brew.

Reaction Roll
2: Will calm the waters of the bay, share the best fishing spots, and may even point out location of sunken ships and beach caves.
3-4: Will perform favors as above, but will demand favors and tribute.
5-7: Ignore
8-10: Rough waters, and empty nets.
11-12: A storm or water spout will immediately develop, and St. Chald will attempt to drown the target of his displeasure.