The farmhouse was in ruins. Blackened roof supports still smoldered, and one collapsed as the companions watched. The barn was mostly intact, though the doors had been smashed in. The corpses of animals were spread around the open door, slaughtered as they ran, the ground muddy with the gore. Beyond, the fields had been trampled. Cornstalks flattened, gords smashed, and even the low stone walls knocked over in spots.

"What did this?" Feris asked.

"Nothing good, and nothing usual. It wasn't goblins or orcs. They'd have taken, or at least eaten some of the animals. These have all just been slaughtered. And where's the family?" Rathgar grumbled, looking around.

"Spread out, look around. We need clues if we're going to stop this." Allianora strode toward the ruins of the house.

Rathgar headed out into the fields, while Nimble and Feris headed toward the barn. Making his way toward a copse of trees, Rathgar stomped through the smashed pumpkin patch. The ground seemed even more churned here than in the other fields. He made a sweeping look around, and then turned back to the farmhouse. Raising his hand to cup around his mouth, he caught a flash of white at his feet. Inside a broken pumpkin, a skull, stripped of flesh and bleach white looked up at him with empty eye sockets. "Here!" he yelled.

In the distance Allianora, Feris, and Nimble looked toward him. They didn't see the pumpkin shift or the claw-like vine grab his ankle. They did see Rathgar drop suddenly to the ground, and at that, they ran toward him. 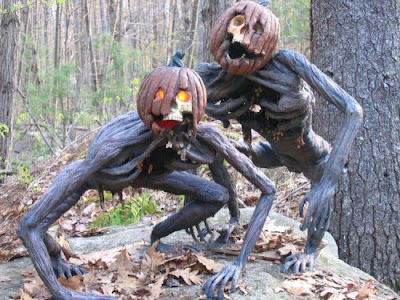 
ACTIONS
Multiattack. The Gordmen attacks with both of its claws.

Breath Attack (Recharge 6). The gordmen vomits up a flaming mass of its own innards inb a 10 ft. cone. Each creature in the area must make a DC 12 dex saving throw taking 3d8+4 fire damage on a failed save, or half as much on a successful one.