5e WNW - Session 27 of the weird new world campaign was played on Saturday 10/3. This was the final session of the campaign, and spanned an entire afternoon rather than the usual 3 hours. This is the second half of the session report.

Upon waking the next morning, the party looked out the door briefly before ascending back up thousands of stairs. The day was dawning a little darker than before. The moon shining blood red, full, and unmoving directly above seemed closer but a sliver was being eclipsed.

Hours later, after a brief rest-bite, the party emerged upon the top of the mountain. While Guy had seen it before, the rest of the party spread out and looked around, noting the central obelisk, the swirling stones set into the ground, and the even darker and closer moon above. Riia noted that in the darkness of the moon, faint lights, like those of cities viewed from a great distance twinkled. The ground shakes were becoming more frequent as well.

With no sign of Boak the Chaos Lord, they set to waiting, guessing correctly that he would appear as the eclipse reached it's totality. They take positions around the doorway, and wait...

As the sun sets the eclipsed moon fills most of the sky. Cities of bizarre layout can be clearly seen on it's surface. A loud crack echos around the bowl, and a dark crack appears in the air, wreathed in green flame. It expands into a gaping hole through which step a quintet of figures. Two are clearly demons, one wears the robes of a wizard, and the other is armored in full plate, his ancient skull like visage. All seem momentarily disoriented.

"We should talk to them! Distract them! Try to make them reconsider what they're doing!" Bingles urges his companions. Everyone hesitates.

Boak shakes off the disorientation, points at the party sending the demons scurrying toward them, and runs toward the obelisk. Zugun screams out "For Justica!" and the chains binding the coffin shatter, the lid busts open, and a blinding white light rushes forth into Nessendra who was charging in to stop Boak from reaching the pillar. As she runs, the light surrounds her, and she begins to grow to giant proportions. The wizard in the back lobs eldritch bolts at the party. 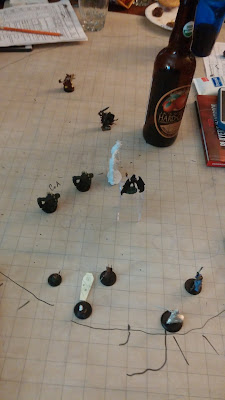 Anya causes the ground around the demons to burst with thorny vines, catching Boak at the edge. Guy drops his illusory cloud over the demons, but the thorns barely slow them down, and they ignore the tearing of their flesh. Kethra, Bingles, and Riia charge in on the demons, focusing on the one furthest from the pillar. Guy swoops in from above. 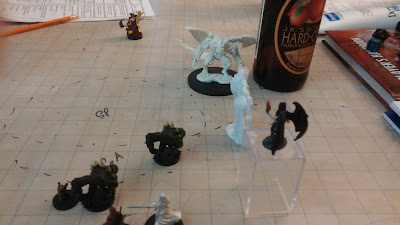 Boak also pulls through the thorns, and reaches the pillar. As his hand connects, he is entirely wreathed in flames. Nessendra hesitates for a moment, then swings her mace into the flames, connecting solidly, and feeling little more than a light toasting of her fingers. Anya and Bach take shots at the flaming figure, to no apparent effect. The Bach and the wizard keep throwing bolts of energy at one another. 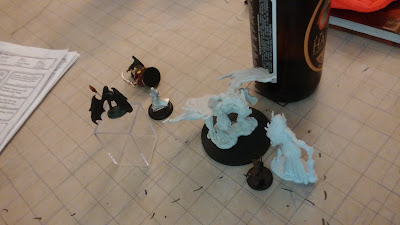 The focused attacks of Kethra, Bingles, Riia, and Guy drop the first demon, and then the second one. Boak, inside a cocoon of flame grows in size, and morphing into a demon lord. Nessendra keeps pounding on him. Reaching his final size, Boak is released from his fiery cocoon and slams hard into Kethra.

With the death of the second demon, Kethra, Bingles, Guy, and Riia charge the wizard. Bingles hitches a ride on Kethra's shoulders, and launches himself at the wizard's face, sending both of them crashing to the ground. In a last ditch effort, the wizard drops a fireball on himself, not nearly inflicting the injury he'd hoped (whole lot of 1s and 2s on the dice). Seconds later, a singed Kethra brings her dwarven warclub down on the wizard's gut, splattering intestines all over the mountaintop. 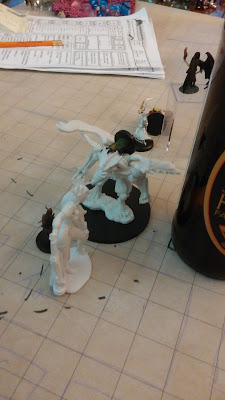 Nessendra and Boak continue to pound on each other, both driven by external powers to destroy the other. Bingles leaps onto Boak's back, chopping with his scimitars. Kethra, Guy, and Riia all move in behind Boak. Bingles holds on for dear life, hacking all the while, as everyone pounds on Boak. Kethra claimed the killing blow with her magical club smashing Boak's spine, sending him crashing into the obelisk breaking it in half. Bingles went tumbling to the ground, as chunks of stone fell all about.

As the party gathered together, dusted themselves off, laughing with the release of knowing they'd completed their quest, a hot wind carrying the smell of brimstone blew over the mountaintop. They looked around, and saw first that the eclipse ended, and the moon seemed to instantly return to it's normal place in the sky. Then they saw a black cloaked distinguished looking man with a craggy face who smiled, put his hand on Guy's shoulder, and said "Time to go."

"You sold your soul?!?" Nessendra yelled, gripping her mace tightly. Guy shrugged and smiled as the smoke and brimstone consumed him and the black cloaked devil.

Thus ended the 5e Weird New World campaign. With the departure of Erindel and Niki (Nessendra and Kethra), we've decided to shelve 5e, and take up the Star Wars game we'd used as a filler game.

I'll be sharing my thoughts and a bit of behind the scenes stuff that I couldn't share while things were ongoing in another post shortly, as well as the character aftermaths!